Quench & Partitioning (QP) steels are characterized by an excellent balance of high tensile strength and good elongation with similar chemical compositions as conventional TRIP steels. They are produced via the Q&P process which consists of a quenching and a partitioning step. In the quenching step, fully austenitized or intercritically annealed steels are quenched to temperatures (referred to as the “quench temperature”) below the martensite start (Ms) temperature but above the martensite finish (Mf) temperature in order to form a controlled volume fraction of martensite. The quenched steels are then held at the same or higher temperatures than the quench temperature during the subsequent partitioning step. Austenite that prevails after quenching is considered to be stabilized through carbon partitioning from martensite into the austenite during the partitioning treatment. The resultant microstructures of the steels mainly consist of tempered martensite and retained austenite so that a higher strength can be achieved as compared to conventional TRIP steels.
Carbon partitioning between ferritic and austenitic phases is essential for all austenite stabilization phenomena in most advanced steels such as those encountered in the Q&P process. The atomistic analysis of carbon partitioning in Q&P alloys is, however, challenging owing to the overlap of several competing phenomena during the partitioning step. It has been suggested that the carbon partitioning from martensite into austenite is controlled by the constrained carbon equilibrium (CCE) criterion. This criterion aims at predicting the carbon concentration in austenite under the condition that

(1) an identical carbon chemical potential exists in both ferrite (or martensite) and austenite;

(2) the atomic balancing proceeds under the assumption that the interface between ferrite and austenite does not migrate.

Therefore, this model does not account for the volume expansion frequently observed during the partitioning step. Possible reasons to explain the volume expansion are the bainite transformation or the migration of martensite/austenite interface, in cases where the partitioning temperature is above the Ms temperature. The bainite transformation can also contribute to carbon enrichment into the remaining austenite if carbide precipitation is suppressed, for example, through the addition of Si. The migration of the martensite/austenite interface should also have some influence on carbon enrichment into austenite. Therefore, it is essential to separate the contributions to the carbon enrichment into austenite during the Q&P heat treatment caused by the carbon partitioning from martensite from that caused by the other possible mechanisms mentioned above. 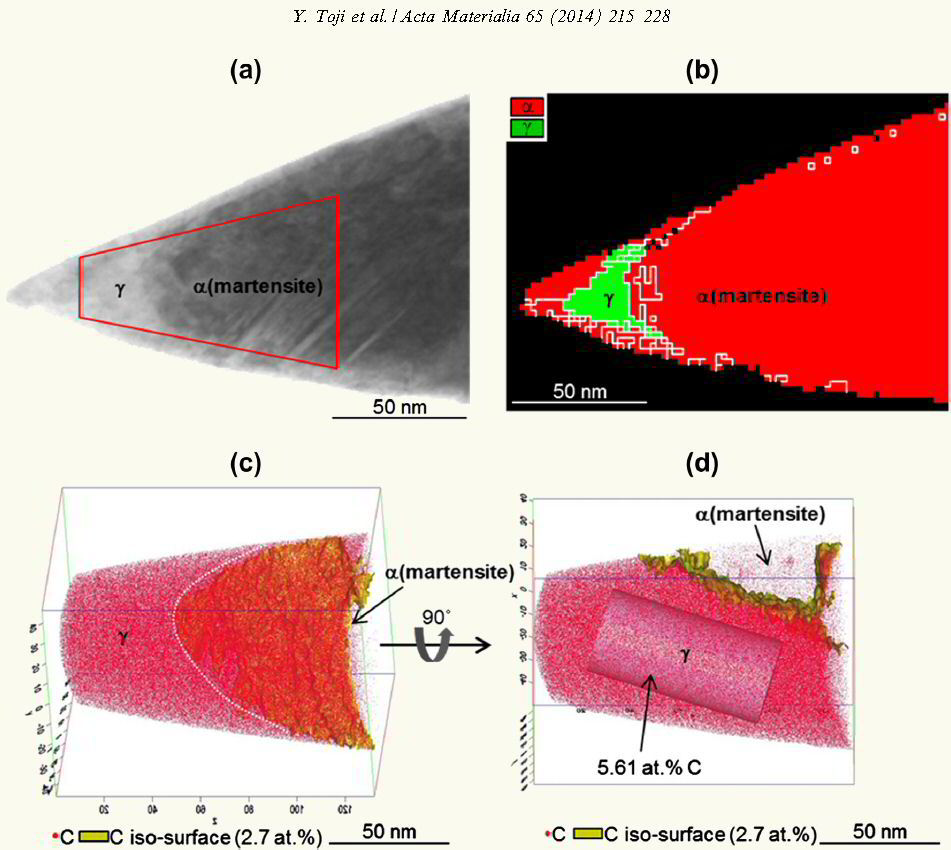 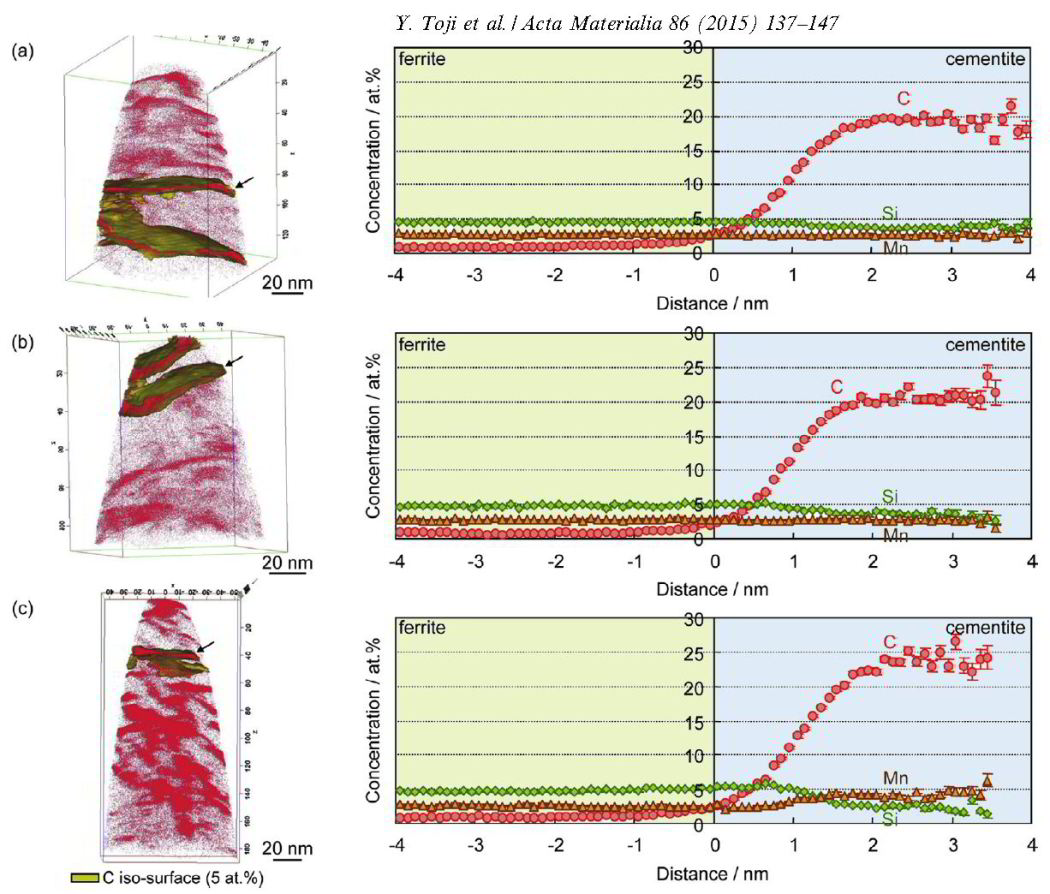 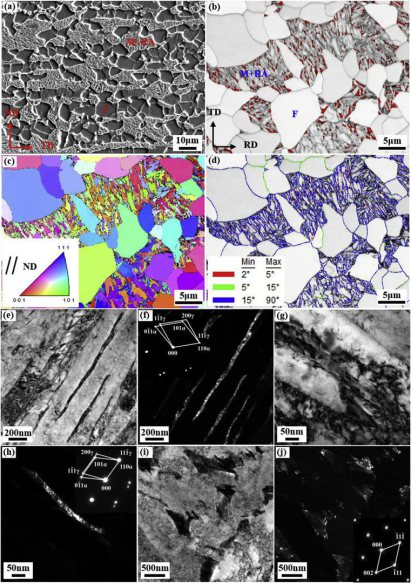 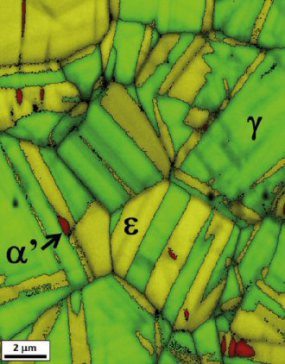 EBSD phase maps: (a) as-received condition. (b) 80%-cold-rolled sample. In these maps, austenite, epsilon- and alpha'-martensite are represented by green, yellow, and red, 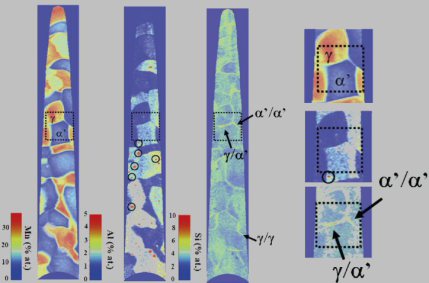 Atom probe tomography results for the 80% cold-rolled sample continuously annealed up to 505 "C. (a) Three-dimensional reconstruction of the specimen. Yellow and blue spheres represent Mn and Al ions, respectively. The iso-composition surfaces for Mn were

In this project we study the austenite (g) reversion in a cold-rolled 17.6 wt.% Mn steel by means of dilatometry and in-situ magnetic measurements during slow continuous annealing. A splitting of the gamma-reversion into two stages was observed to be a result of strong elemental partitioning between gamma and martensite during the low temperature stage between 390 and 575 "C. Atom probe tomography (APT) results enable the characterization of the Mn-enriched reversed-g and the Mn-depleted remaining martensite. Because of its lower Mn content, the reversion of the remaining a0-martensite into austenite takes place at a higher temperature range between 600 and 685 "C. APT results agree with partitioning predictions made by thermo-kinetic simulations of the continuous annealing process. The critical composition for gamma-nucleation was predicted by thermodynamic calculations (Thermo-Calc) and a good agreement was
found with the APT data. Additional thermo-kinetic simulations were conducted to evaluate partitioning-governed g-growth during isothermal annealing at 500 "C and 600 "C. Si partitioning to gamma was predicted by DICTRA and confirmed by APT. Si accumulates near the moving interface during gamma-growth and homogenizes over time. We used the chemical composition of the remaining a0-martensite from APT data to calculate its Curie temperature (TCurie) and found good agreement with magnetic measurements. These results indicate that elemental partitioning strongly influences not only gamma-reversion but also the TCurie of this steel. The results are important to better understand the thermodynamics and kinetics of austenite reversion for a wide range of Mn containing steels and its effect on magnetic properties.