Soft magnetic alloys are materials that are amenable to easy magnetisation and demagnetization.
Soft magnetic materials therefore are typically characterized by an intrinsic coercivity below 1000 Am-1. They are used primarily to enhance and/or channel the flux produced by an electric current. The main parameter which often serves as a figure of merit for soft magnetic materials, is the relative permeability ( mr, where mr = B/moH), which is a measure of how readily the material responds to the applied magnetic field. The other main parameters of interest are the coercivity, the saturation magnetisation, magneto-resistivity eddy current structure and losses (as a function of sample dimensions), heat conductivity and the electrical conductivity.
The types of applications for soft magnetic materials fall into two main categories, of namely, alternating current (AC) and direct current (DC) applications.

In DC soft magnetic applications the material is magnetised in order to perform a specific task and then demagnetised at the end of that operation, such as switchable electromagnets.

In AC applications the soft magnetic material will be continuously cycled, often at rather high frequencies, from being magnetised in one direction to the other, throughout the entire period of operation, e.g. a power supply transformer. A high permeability will be desirable for each type of application but the significance of the other properties varies.

For DC applications the main consideration for material selection is most likely to be the permeability. This would be the case, for example, in shielding applications where the flux must be channelled through the material. Where the material is used to generate a magnetic field or to create a force then the saturation magnetisation may also be significant.
For AC applications the important consideration is how much energy is lost in the system as the material is permanently and a very high frequencies cycled around its hysteresis loop. The energy loss can originate from three different sources:

1. Hysteresis loss, which is related to the area contained within the hysteresis loop;

2. Eddy current loss, which is related to the generation of electric currents in the magnetic material and the associated resistive losses and

3. Anomalous loss, which is related to the movement of the magnetic domain walls (Bloch walls) within the material. 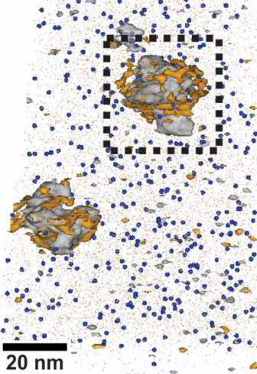 Amorphous and nano-crystalline soft magnetic alloys are playing a particularly important role in that context: These alloys can be produced in the form of a tape for instance by melt-spinning or other rapid cooling means.  Amorphous and nanocrystalline soft magnetic alloys typically can contain iron, silicon, boron, carbon, phosphorous copper, nickel and/or cobalt with one or more of the following elements.  They have extremely low coercivity, an order of magnitude less than standard Fe-Si, and consequently lower hysteresis losses. However, they have relatively low magnetisation and are not suitable for high current applications. They do find a market in low current applications and specialised small devices where they can compete with Ni-Fe. Recently there has been increasing interest in nano-crystalline soft magnetic alloys which are produced the processed by annealing the as-synthesized amorphous material (typically produced by melt spinning using relatively large copper wheels). These alloys often have a single amorphous phase as a matrix but are usually heat treated, in part under the effect of externally imposed stresses, to form nano-sized grains, in the range 5-50 nm inside the amorphous matrix. They have relatively high resistivity, low anisotropy and good mechanical strength. The latter effect is particularly relevant when soft magnetic alloys are being used in electrical motors that are used in highly mechanically stressed environments, such as encountered in hybrid vehicles. This means that soft magnetic materials that are used in hybrid propelled cars need to have not only excellent soft magnetic properties but also excellent strength and fatigue properties.

Partially nanocrystalline Fe-Si-B based amorphous alloys are known to exhibit excellent soft magnetic properties. Small additions of Cu and Nb facilitate the formation of an amorphous-crystalline nanocomposite microstructure upon annealing of initially amorphous precursor materials. In the case of FINEMET type (Fe73.5Si13.5Nb3B9Cu1, Fe73.5Si15.5Nb3B7Cu1) alloys, optimum nanostructures are obtained after conventional annealing (CA) for ~ 30 - 60 min at temperatures slightly higher than the onset temperature of primary crystallization (~ 570 °C). The obtained nanocomposite microstructure is characterized by the presence of soft-magnetic Fe3Si nanocrystals (70-80 Vol%) having a size of 15-20 nm being embedded in the remaining amorphous matrix. In this regime of nano-sized crystals, optimum soft magnetic properties including very low coercivity values and negligible saturation magnetostriction are obtained.
Recently, rapid annealing (RA) of amorphous Fe73.5Si15.5Nb3B7Cu1 alloys was introduced, wherein the amorphous precursor materials were annealed at temperatures higher than that required for CA by at least ~100 °C for very short annealing times of 4-10 s. Such a procedure also resulted in similar nanocrystalline microstructures comparable to those of their CA counterparts. The underlying reason for obtaining such similar nanostructures, even though the annealing procedures are entirely different, is attributed to the presence of 1 at.% Cu. It was observed using atom probe tomography (APT) that the clustering of Cu atoms upon RA starts prior to the onset of primary crystallization, thereby, introducing chemical precursor heterogeneities in the amorphous matrix. Such local chemical heterogeneities include Fe-Si rich regions (acting as nuclei) which at higher annealing temperatures nucleate into DO3 structured Fe3Si nanocrystals. In addition to the well-established Cu clustering induced heterogeneous nucleation mechanism of Fe3Si nanocrystals the recently observed chemical heterogeneity induced nucleation during RA has introduced a novel way of obtaining ultra-fine-grained nanocrystals (10-12 nm) with high number density. The implications of employing such a RA process can be evidenced from the case of the newly developed Fe-rich (>80 at.%) NANOMET alloys, where uniform nanocrystalline (<20 nm) microstructures exhibiting outstanding soft magnetic properties are achieved by  RA.
Having realized the potential of RA on nanocrystallization, we investigate in this study the role of RA on the soft magnetic Fe3Si nanocrystallization in Cu-free Fe74.5Si15.5Nb3B7 alloy.  It has been reported that the Cu-free Fe74.5Si15.5Nb3B7 alloy results in the simultaneous nucleation of both soft-magnetic Fe3Si phase and the undesired hard-magnetic Fe-B compounds upon CA. Hence the objective of this study is two-fold. First, we explore the possibility of obtaining isolated soft-magnetic Fe3Si nanocrystals employing RA, such as observed in the case of Fe73.5Si15.5Nb3B7Cu1 alloy. Second, the RA induced nanocrystallization process is utilized to understand the atomic-scale mechanisms during homogeneous nucleation of quenched-in Fe rich nuclei which later crystallize into DO3 structured Fe3Si nanocrystals. 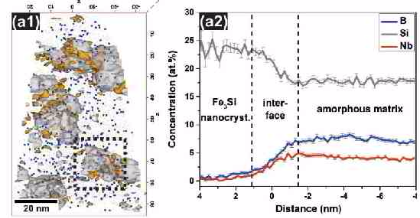