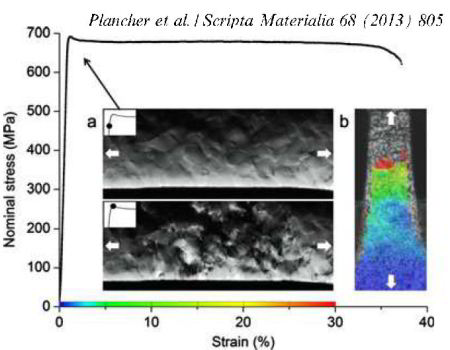 “Gum metal” is a recently developed class of beta (i.e. body-centered cubic) titanium-based alloys, which possesses an excellent yet unusual mechanical
behavior: at room temperature, when deformed in tension, gum metal exhibits high yield stress (up to 1 GPa) and very good elongation to failure (up to 35%. Despite the rapidly growing interest in this alloy class, the physical mechanisms governing its plastic behavior are still unclear. Specifically, the contribution of lattice dislocation activity in relation to the proposed “giant fault” mechanism is not yet established. The concept of a giant fault was introduced by the research group that invented and studied the alloy in 2003. Their observations, and those of others, revealed the existence of micrometer-sized twodimensional band-like features carrying local shear. These faults were suggested to correlate with certain crystallographic directions <111> that were elastically softened by a careful choice of chemical stoichiometry: Ti–23Nb–0.7Ta–2Zr–1.2O (at.%). Based on reports observing no significant dislocation activity in the alloy, some theories have been proposed which support the dislocation-free nature of the giant fault mechanism. In contrast to these observations, an increasing number of studies underline the presence and activity of dislocations in gum metal. Some studies even claim a fully ½h111i dislocation glide-controlled plasticity mechanism. These results raise new questions, especially regarding the absence of strain hardening in the tensile stress–strain curves. Customary heavy coldworking processing steps further complicate the matter: giant faults are mainly reported in as-annealed tensile specimens, whereas studies on dislocation activity were performed on cold-swaged or cold-compressed samples. These diverging observations motivated us to conduct a systematic multiscale analysis of deformation mechanisms in gum metal, specifically addressing the contributions of giant faults and lattice dislocations, respectively, to the plastic deformation. 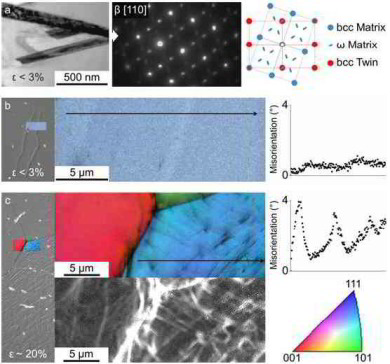 The excellent mechanical properties of the Ti–Nb-based gum metal were originally proposed to arise from a “dislocation-free” giant fault mechanism; however, the involvement of lattice dislocations in the process is still under debate. To address this issue, gum metal deformation mechanisms are investigated systematically on cast specimens, employing postmortem and in situ analysis techniques. The results demonstrate that a giant fault mechanism (which appears to be a phase-transformation-assisted nanotwinning
mechanism) governs gum metal plasticity without direct assistance from dislocations during the process. 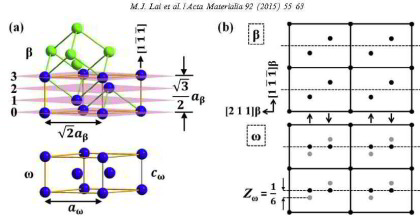 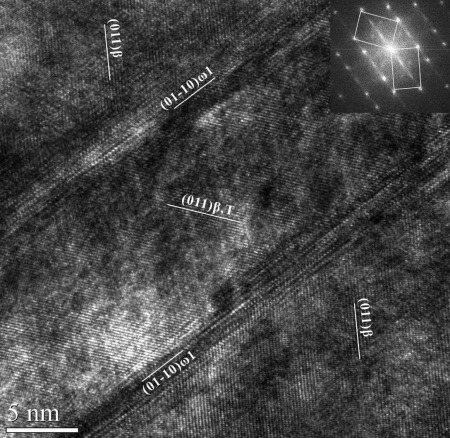 Allotropic transformations between the high-temperature body-centered cubic (bcc) beta phase and the lower-temperature hexagonal close-packed (hcp) alpha phase exist in group IV elements such as Ti, Zr and Hf. Upon alloying with beta-stabilizing elements such as V, Mo, Nb, W or Ta the resultant alloys may form a number of other stable or metastable phases including hcp alpha', base-centered
orthorhombic alpha'', non-close-packed hexagonal omega and some intermetallic phases. Improved understanding of the metastable omega phase in beta-type Ti alloys and Zr alloys is of high relevance since its discovery, due to its roles in affecting mechanical and physical properties and its special formation
mechanism [1]. Banerjee et al. [2] documented the various omega phase morphologies and underlying formation mechanisms: The beta to omega transformation can occur (i) thermally, i.e., via rapid cooling from the single bcc beta phase field or by subsequent isothermal aging, producing ellipsoidal or cuboidal omega particles homogeneously distributed throughout the beta matrix; or (ii) mechanically, i.e., via extremely high strain-rate compressive loading
(shock loading), producing non-uniformly distributed omega plates (hereafter referred to as plate-like omega) [3,4]. Interestingly, recent studies on Ti–Nb-based alloys [5–7]