Influences of deformation strain, strain rate and cooling rate on the Burgers orientation relationship and variants morphology during beta→ alpha phase transformation in a near a titanium alloy
Materials Science and Engineering A 549 (2012) 20-29
Mater Science Engin A 549 (2012) Titaniu[...]
PDF-Dokument [965.0 KB]

High temperature compression deformation studies of Ti–6Al–2Zr–1Mo–1V titanium alloy in full beta phase region with different strains/strain rates and then with subsequent varied cooling rates were performed to understand the microstructure evolution. Crystal orientation information and microstructure
morphology of all tested samples were investigated by electron backscatter diffraction (EBSD) measurements. The crystal orientations of prior high temperature b grains were estimated by reconstructing the retained beta phase at room temperature. The theoretical crystal orientations of all possible alpha variants within an investigated prior beta grain were calculated according to the Burgers orientation relationship (OR) between parent and product phase. The calculated and experimental results were then compared and analyzed. The influences of deformation strain, strain rate and cooling rate on the Burgers OR between prior b matrix and precipitated a phase were investigated. Full discussions have been conducted by combination of crystal plasticity finite element method (CPFEM) grainscale simulation results. The results indicate that external factors (such as deformation strain, strain rate and cooling rate) have a slight influence on the obeying of Burgers OR rule during teh beta → alpha phase transformation. However, strain rate and cooling rate have a significant effect on the morphology of precipitated alpha phase. 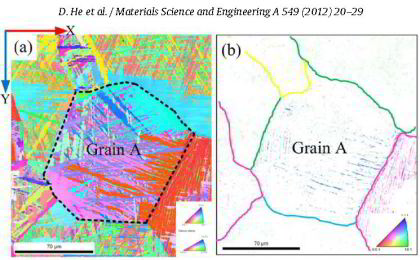 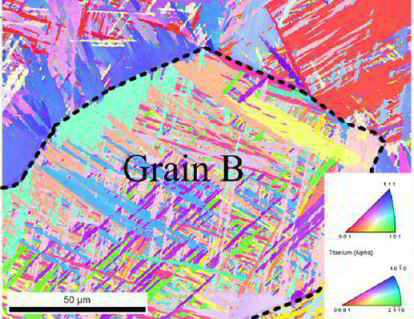 In this study we present a new strategy for the theory-guided bottom up design of b-Ti alloys for biomedical applications using a quantum mechanical approach in conjunction with experiments. Parameter-free density functional theory calculations are used to provide theoretical guidance in selecting and optimizing Ti-based alloys with respect to three constraints: (i) the use of non-toxic alloy elements; (ii) the stabilization of the body centered cubic b-phase at room temperature; (iii) the reduction of the elastic stiffness compared to existing Ti-based alloys. Following the theoretical predictions, the alloys of interest are cast and characterized with respect to their crystallographic structure, microstructure, texture, and elastic stiffness. Due to the complexity of the ab initio calculations, the simulations have been focused on a set of binary systems of Ti with two different high melting body-centered cubic metals, namely, Nb and Mo. Various levels of model approximations to describe mechanical and thermodynamic properties are tested and critically evaluated. The experiments are conducted both, on some of the binary alloys and on two more complex engineering alloy variants, namely, Ti–35 wt.% Nb–7 wt.% Zr–5 wt.% Ta and Ti–20 wt.% Mo–7 wt.% Zr–5 wt.% Ta. 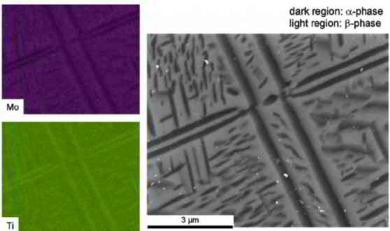 The crystallographic microtexture and microstructure of a beta-titanium alloy (Ti–35 wt.% Nb–7 wt.% Zr–5 wt.% Ta) is studied after warm rolling and recrystallization. The main observations are the evolution of partially recrystallized microstructures during warm rolling and the formation
of strong through-thickness texture and microstructure gradients at larger strains. Both, the recrystallized volume fraction and the texture depend on the thickness reduction. At small reductions (≤50%) texture gradients are also small showing some abcc-fiber (crystallographic axis h1 1 0i parallel to the rolling direction) and g-fiber (crystallographic axis h1 1 1i parallel to the normal direction) texture components. At larger strains (70–90%) the texture and microstructure gradients are characterized by shear texture components and dynamic recrystallization particularly close to the surface layers and plane strain texture components which are typical of recovered grains in the center layer. 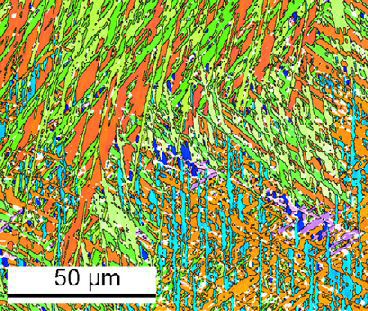 Electrochemical impedance spectroscopy was used to study the interface between the anodic oxide formed on Ti–Nb alloys with specific compositions of Ti–10 wt.% Nb and Ti–20 wt.% Nb and the electrolyte. The anodic oxides were grown in an acetate buffer of pH 6.0 by using cyclic voltammetry electrochemical technique in which the potential is scanned at a rate of 100 mV s−1. The potential applied starts from 0 V and increasing at steps of 1 V till 8 V which allows to study the mechanism and the kinetics involved during the oxide growth. The electrochemical impedance measurements were started prior to
applying any potential so that the electronic properties of the native oxide on the Ti–Nb alloys can be determined. The electrochemical measurements were then carried out after each oxide growth so that the electronic properties of the previously grown oxide can also be determined. The variation of the capacitance of the respective oxides determined from the impedance measurements with the applied potential enables the calculation of the relative permittivity of the respective oxides on the two alloys. Moreover the semiconducting properties of the oxides were determined by using Mott–Schottky analysis. The Mott–Schottky analysis involves electrochemical impedance measurements at fixed frequency with increasing applied bias potential so that the variation of the capacitance of the space charge region with the applied potential can be followed. The oxides from both alloys showed an n-type semiconducting property with 7.5×10^18 cm−3 and 2.4
× 10^19 cm−3 donor concentration for Ti–10 wt.% Nb and Ti–20 wt.%
Nb alloys respectively. 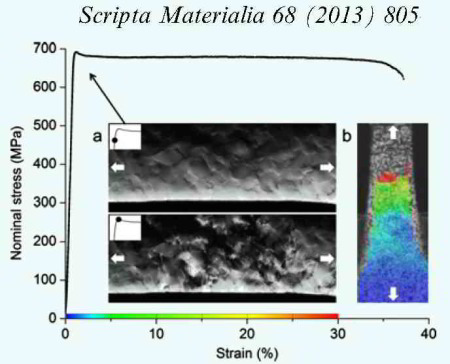 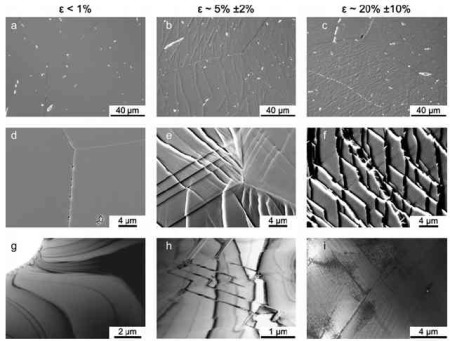 “Gum metal” is a recently developed class of beta (i.e. body-centered cubic) titanium-based alloys [1–3], which possesses an excellent yet unusual mechanical behavior: at room temperature, when deformed in tension, gum metal exhibits high yield stress (up to 1 GPa [3,4]) and outstanding elongation to failure (up to 35% [this work]). Despite the rapidly growing interest in this alloy class, the physical mechanisms governing its plastic behavior are still unclear. Specifically, the contribution of lattice dislocation activity in relation to the

proposed “giant fault” mechanism is not yet established. The concept of a giant fault was introduced by the research group that invented and studied the alloy in
2003. Their observations [1–3], and those of others [4,5], revealed the existence of micrometer-sized twodimensional band-like features carrying local shear.
These faults were suggested to correlate with certain crystallographic directions (111) that were elastically softened by a careful choice of chemical  stoichiometry: Ti–23Nb–0.7Ta–2Zr–1.2O (at.%) [6,7]. Based on reports
observing no significant dislocation activity in the alloy [1–3,5,8], some theories have been proposed which support the dislocation-free nature of the giant fault mechanism [9,10].
In contrast to these observations, an increasing number of studies underline the presence and activity of dislocations in gum metal [11–16]. Some studies even claim a fully ½h111i dislocation glide-controlled plasticity mechanism [17,18]. These results raise new questions, especially regarding the absence of strain hardening in the tensile stress–strain curves. Customary heavy coldworking
processing steps further complicate the matter: giant faults are mainly reported in as-annealed tensile specimens [1–4], whereas studies on dislocation activity
were performed on cold-swaged or cold-compressed samples [11–18]. These diverging observations motivated us to conduct a systematic multiscale analysis of deformation mechanisms in gum metal, specifically addressing the contributions of giant faults and lattice dislocations, respectively, to the plastic deformation.

For the experiments, we use a laboratory-cast Ti– 22.6Nb–0.47Ta–1.85Zr–1.34O (at.%) alloy. It was produced in an arc-melting furnace under an argon atmosphere and cast into a copper mold. The sample was then annealed for 4 h at 1200 C and furnace cooled. The chemical composition was controlled by inductively coupled plasma and optical emission spectrometry and infrared absorption measurements. When processing conditions are not properly optimized, Ti–Nb alloys can suffer significantly from segregation and microstructural heterogeneity, which would then play a direct role in deformation characteristics. In this work, to avoid such issues, microstructural and chemical homogeneity were verified by subsequent light microscopy, electron
backscatter diffraction (EBSD) and energy dispersive X-ray spectroscopy (EDX) analyses. The alloy was not subjected to any cold-working, to enable unbiased identification of the prevalent deformation mechanisms. EBSD measurements revealed that the microstructure consists of non-textured equiaxed b-phase grains of 60 lm average size. Small amounts of additional microstructural constituents were also observed by EDX and TEM, i.e. carbide inclusions from casting and omega phase from the final cooling. The existence of omega phase in gum metal was also reported in recent works (e.g. [4]), although not reported originally (i.e. [1]).