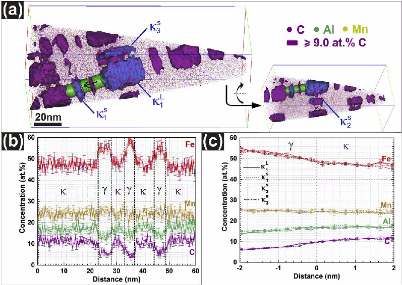 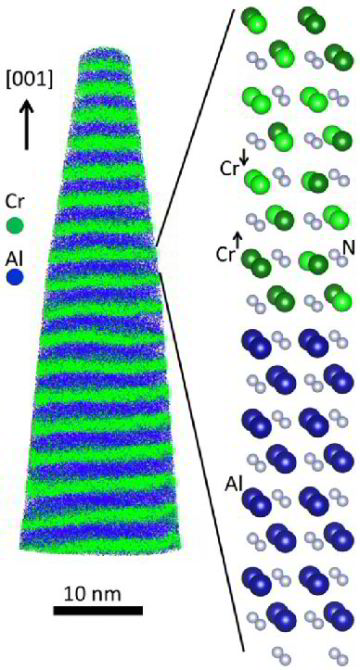 A theory-guided materials design of nano-scaled superlattices containing metastable phases is critically important for future development of advanced lamellar composites with application-dictated stiffness and hardness.Our study combining theoretical and experimental methods exemplifies the strength of
this approach for the case of the elastic properties of AlN/CrNsuperlattices that were deposited by reactive radio-frequency magnetron sputtering with a bilayer period of 4 nm. Importantly, CrN stabilizes AlNin ametastable B1 (rock salt) cubic phase only in the formof a layer that is very thin, up to a few nanometers.Due to the fact that B1-AlN crystals do not exist as bulkmaterials, experimental data
for this phase are not available. Therefore, quantum-mechanical calculations have been applied to simulate an AlN/CrN superlattice with a similar bilayer period.The ab initio predicted Youngʼs modulus (428GPa) along the [001] direction is in excellent agreementwithmeasured nano-indentation values (408±32 GPa).Aiming at a future rapid high-throughputmaterials design of superlattices,we have also tested predictions obtained within linear-elasticity continuummodeling using elastic properties of B1-CrNand B1-AlN phases as input. Using single-crystal elastic constants fromab initio calculations for both phases, we demonstrate the reliability of this approach to design nano-patterned
coherent superlatticeswith unprecedented and potentially superior properties.

The interaction of dislocations with precipitates is an essential strengthening mechanism in metals, as exemplified by the superior high-temperature strength of Ni-base superalloys. Here we use atomistic simulation samples generated from atom probe tomography data of a single crystal superalloy to study the interactions of matrix dislocations with a gamma' precipitate in molecular dynamics simulations. It is shown that the precipitate morphology, in particular its local curvature, and the local chemical composition significantly alter both, the misfit dislocation network which forms at the precipitate interface, and the core structure of the misfit dislocations. Simulated tensile tests reveal the atomic scale details of many experimentally observed dislocation–precipitate interaction mechanisms, which cannot be reproduced by idealized simulation setups with planar interfaces. We thus demonstrate the need to include interface curvature in the study of semicoherent precipitates and introduce as an enabling method atom probe tomography-informed atomistic simulations. 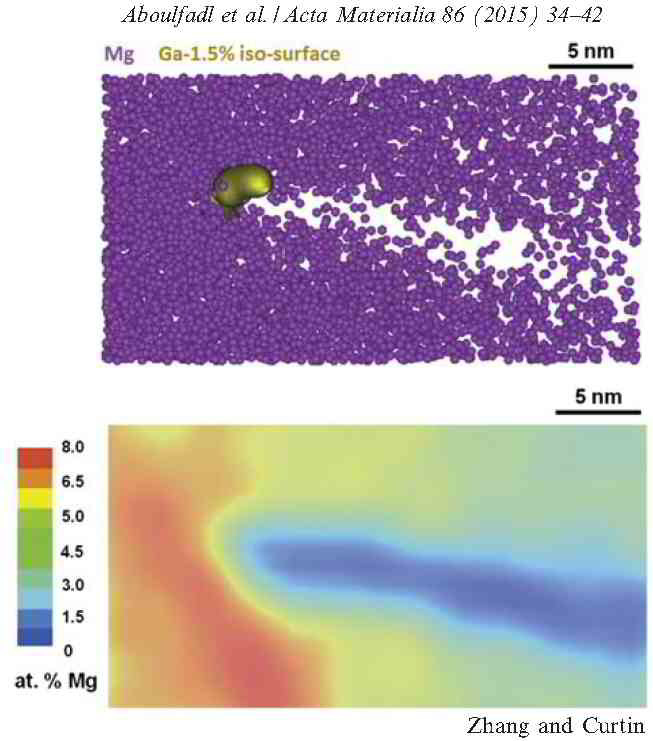 Dynamic strain aging arises from the interaction between solute atoms and matrix dislocations in strained metallic alloy. It initiates jerky dislocation motion and abrupt softening, causing negative strain rate sensitivity. This effect leads to instable flow phenomena at the macroscopic scale, appearing as a serrated stress–strain response and deformation banding. These macroscopic features are referred to as the Portevin–Le Chatelier effect (PLC). Here we study the atomistic origin of dynamic strain aging in an Al-4.8 at.% Mg alloy using atom probe tomography (APT) and transmission electron microscopy (TEM). Samples were prepared from as-cold rolled (90% thickness reduction), stabilized (120 C, 20 h) and recrystallized sheets (400 C, 10 min), respectively. In the stabilized state, Mg was found to decorate <110> aligned dislocations with up to 12.5 at.%.
Tensile tests in combination with thermographic and laser speckle observations were used to map the deformation bands for the site-specific extraction of APT samples from regions inside the PLC bands. We observed an asymmetrical Mg distribution along some of the dislocations, matching model predictions for high dislocation speeds at peak drag stress by Zhang and Curtin. In this case, the Mg distribution is characterized by depletion in the compressive regime above the dislocation slip plane and enrichment in the dilatation region below the slip plane. Mg also depletes in a tail-like form behind fast-moving dislocations, further promoting slip localization.