Iron aluminides are Fe–Al alloys with about 20–50 at.%Al. They are among the most widely studied intermetallic compounds due to their good oxidation resistance, low density compared to steels and their low manufacturing costs. Low room temperature ductility has been a major obstacle for mechanical processing of these materials, while a drop in strength above 600 °C limits their applications. Recent research indicates that doping and microstructure control can improve the mechanical properties of these alloys.
Iron aluminides exhibit order–disorder transformations and large concentrations of defects that depend on temperature and composition. In the Fe-rich portion of the Fe–Al binary diagram exist the disordered A2 and the ordered B2 (FeAl) and D03 (Fe3 Al) phases. The ordering transformations begin with the formation of small ordered nuclei, which grow until impingement, resulting in an anti-phase domain structure.  Different types of anti-phase boundaries are present in the ordered alloys depending on their structure. In B2 ordered alloys only one type of anti-phase boundary is found, the B2-type APB (or APB1) that is formed through the A2→B2 ordering transformation and that has a fault vector a/2 <111> (where a is the lattice parameter of the B2 unit cell). In ordered D03 two types of anti-phase boundaries can appear: the APB1 that forms as above, with a fault vector a0/4 <111> (where a0 is the lattice parameter of the D03 unit cell) and the D03-type APB (or APB2) related to the B2→D03 transformation with a
fault vector a0/2 <100>. 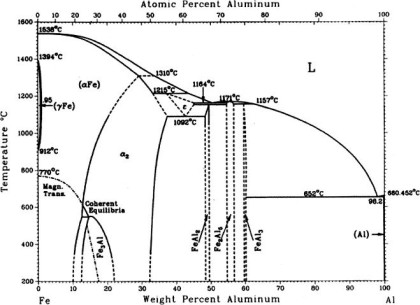 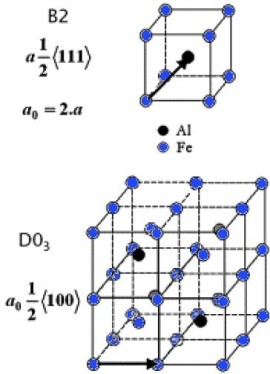 We present a study of the microstructure around a hard Laves particle in a warm-rolled intermetallic Fe3Al-based alloy. The experiments are conducted using a system for three-dimensional orientation microscopy (3D electron backscattering diffraction, EBSD). The approach is realized by a combination of a focused ion beam (FIB) unit for serial sectioning with high-resolution field emission scanning electron microscopy with EBSD. We observe the formation of steep 3D orientation gradients in the Fe3Al matrix around the rigid precipitate
which entail in part particle-stimulated nucleation events in the immediate vicinity of the particle. The orientation gradients assume a characteristic pattern around the particle in the transverse plane while revealing an elongated tubular morphology in the rolling direction. However, they do not reveal a characteristic common rotation axis. Recovered areas in the matrix appear both in the transverse and rolling directions around the particle. The work demonstrates that the new 3D EBSD-FIB technique provides a new level of microstructure information that cannot be achieved by conventional 2D-EBSD analysis.

The evolution of the crystallographic rolling textures of B2- and DO,-ordered polycrystalline iron aluminides is described in terms of Taylor-type simulations. The contribution of crystallographic slip on the various types of glide systems, particularly the influence of {112}<III > slip is examined, The evolution of the aspect ratio of the grains during rolling is considered by gradually relaxing the externally imposed strain constraints with increasing deformation, For simulating low reductions, full constraints Taylor-type conditions are assumed. For describing intermediate reductions the lath model and for large reductions the pancake model is employed.

The development of crystallographic texture during warm rolling of B2,
ordered polycrystalline Fe-28 at.% AI-2 at.% Cr aggregates has been examined.
The evolution of rolling texture has been simulated by means of Taylor-type
'relaxed-constraints' models. Good correspondence of modelled and experimentally detected rolling textures was found for simulations based on activation of {110}(1 11) and {112}(1 11) glide systems. According to these simulations it is not likely that considerable amounts of slip on {00I }<100), {0Il }(l00) or {123}(1 11) slip systems contribute to plastic deformation of
Fe-28 at.% AI-2 at.% Cr compounds during rolling at elevated temperatures.

An imperfectly B2 ordered Fe3Al aggregate was cast, thermomechanically hot rolled and finally annealed at 870 K. Subsequently, the specimen was rolled at 800–830 K to a strain ε of 80%. The microstructure and the crystallographic texture of the rolled polycrystalline sample was investigated within the range ε=20–80%. The microstructure consisted of flat, elongated grains. In numerous grains straight slip lines were detected. Even after ε=80% recrystallization was not observed. The rolling texture of Fe3Al considerably deviates from that of non-ordered body centered cubic (b.c.c.) alloys and pure b.c.c. metals. The {111}〈uvw〉 texture fibre (7-fibre) was very pronounced, while the {hkl}〈110〉 fibre (α-fibre) was very weak. The {112}〈110〉 orientation which represents the strongest texture component in non-ordered b.c.c. alloys did not occur at all. The textures are discussed in terms of the {110}〈111〉, {112}〈111〉, {112}〈111〉 and {123}〈111〉 slip systems. The contribution of crystallographic slip of the various types of potential slip systems was simulated by means of the Taylor theory.

A Fe3Al based single phase alloy was rolled at 600 °C and 400 °C and the kinetics of recrystallisation in A2 and B2 phase regions was determined in conjunction with the kinetics of the A2-B2 ordering and recovery. At 700°C and 800°C the recrystallisation kinetics depends strongly on the temperature of rolling while at 900°C only a small influence is visible. These results are attributed to the high stored energy in the sample rolled at 400 °C and its high recovery rate at 900 °C, leading to a similar level in stored energy as for the sample rolled at 600 °C in the beginning of annealing. At lower temperatures, in contrast, the difference in stored energy is conserved over longer times in the annealing process. Almost half the apparent activation energy was observed in
the ordered state compared to that in the disordered state.

An intermetallic FenAI" alloy (doped with Cr, Zr, Mo, and C) with an imperfectly ordered B2 crystal structure was rolled at 830-860 K to e = 20%. To investigate crystallographic slip an etching technique was developed which allowed slip traces to be determined in grain interiors rather than at the sample surface. To derive the prevalent glide systems both the slip traces and the corresponding
orientations were determined in grain scale. Three types of slip systems were identified, namely {I IO}<J I I), {112}<111), and {l23}<III). However, the slip traces produced by {123}<lll) systems appeared wavy and were interpreted in terms of macroscopic or effective rather than crystallographic slip. The critical resolved shear stress ratio of the slip systems involved was fitted from experiment using a
Relaxed Constraints Taylor model. The best correspondence between predicted and experimentally observed slip systems was attained for a critical resolved shear stress ratio of T(lIO}/T(lll} = 1.05/1.0.

The evolution of the microstructure and crystallographic texture of a polycrystalline Fe3Al alloy during rolling and subsequent annealing was studied. For this purpose optical microscopy, single orientation determination in the scanning electron microscope and X-ray texture measurements were carried out on both rolled and annealed specimens. During warm rolling (€'max = 80%,
Troll = 560°C) a strong texture fibre close to {111}(uvw) with a maximum at {557}(110) was developed. During the subsequent heat treatment (750°C, salt bath) the orientation distribution did not change substantially, i.e. the texture close to {Ill} (UVlV) was essentially preserved. For annealing times less than 50 s the {557}(110) orientation remained the dominant texture component. For annealing times exceeding 50 s the {557} (110) orientation considerably decreased and the {Ill} (112) orientation, which was nearly unaffected by annealing, became the main orientation. These texture changes, which were studied in detail by use of single orientation determination, were interpreted in terms of preferred recovery in {Ill} (112) and preferred recrystallization in {557}(110) oriented grains.