Aluminum compounds can be joined to most other materials quite readily by adhesive bonding or mechanical fastening.
In contrast, special care and specific metallurgical techniques must be applied if Aluminum compounds are to be arc welded to other alloys such as steel. In such cases very brittle and hence undesired intermetallic compounds can be formed when metals such as steel, copper, magnesium or titanium are directly arc welded to aluminum. To avoid these brittle compounds, some special techniques have been developed to isolate the other metal from the molten aluminum during the arc welding process. The two most common methods of facilitating arc welding of aluminum to steel are bimetallic transition inserts and coating the dissimilar material prior to welding.

While Si additions to Al are widely used to reduce the thickness of the brittle intermetallic seam formed at the interface during joining of Al alloys to steel, the underlying mechanisms are not clarified yet. The here presented approach for the site specific atom probe tomography analysis revealed Si enrichments at grain and phase boundaries between the θ (Fe4Al13) and η (Fe2Al5) phase, up to about ten times that of the concentration in Al. The increase in Si concentration could play an important role for the growth kinetics of the intermetallic phases formed for example in hot-dip aluminizing of steel.

Autogeneous laser beam welding is an efficient process to join ferritic-martensitic dual-phase steels without large dimensional distortions. Localized softening may occur in the heat affected zone, particularly in DP1000 steel with a high martensite volume fraction. DP1000 steel was welded in bead-on-plate configuration varying the welding power between 0.4 and 2.0 kW and the welding speed between 20 and 150 mm/s. Light optical microscopy, scanning electron microscopy, and X-ray diffraction were used to perform the microstructural characterization of the welded joints. High-quality laser beam welds of thin sheets of DP1000 steel can be produced using appropriate welding parameters. The optimal welding condition was a nominal laser power of 2.0 kW and a welding speed of 150 mm/s. This condition minimizes the amount of softening of prior martensite and yields a narrow heat affected zone and a small volume fraction of retained austenite in the weld.

Dissimilar joining of steel to aluminium alloys: the Kirkendall effect

Dissimilar joining of iron (Fe) to aluminium (Al) alloys is of eminent technical interest, as it allows the use of these two essential engineering materials in the same design. Thus, the high strength, good creep resistance, and formability of steels may be combined with the low density, high thermal conductivity and

good corrosion resistance of Al alloys in one hybrid part. Applications for such dissimilar joints between Fe and Al alloys are ubiquitous and range from an improved strength-to-weight ratio in transportation systems to high temperature corrosion protection in the chemical industry or enhanced cooling efficiency
for example in cryogenic technology. Joining of Fe and Al alloys is impeded by the differences in their mechanical properties and melting temperatures and because of the formation of brittle intermetallic phases.

In this work the formation of intermetallic reaction layers and their influence on mechanical properties was investigated in friction stir welded joints between a low C steel and both pure Al (99.5 wt.%) and Al–5 wt.% Si. Characterisation of the steel/Al interface, tensile tests and fractography analysis were performed on

samples in the as-welded state and after annealing in the range of 200–600°C for 9–64 min. Annealing was performed to obtain reaction layers of distinct thickness and composition. For both Al alloys, the reaction layers grew with parabolic kinetics with the h phase (Al5Fe2) as the dominant component after
annealing at 450 ◦C and above. In joints with pure Al, the tensile strength is governed by the formation of Kirkendall-porosity at the reaction layer/Al interface. The tensile strength of joints with Al–5 wt.% Si is controlled by the thickness of the h phase (Al5Fe2) layer. The pre-deformation of the base materials, induced by the friction stir welding procedure, was found to have a pronounced effect on the composition and growth kinetics of the reaction layers. 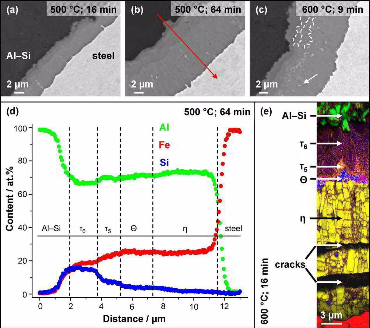 H. Springer, A. Kostka, J.F. dos Santos, D. Raabe Materials Science and Engineering A 528 (2011) 4630-4642 Influence of intermetallic phases and Kirkendall porosity on the mechanical properties of joints between steel and aluminium alloys

What is formation mechanisms and role of intermetallic phases during interdiffusion between low-carbon steel and aluminum alloys ? Basic study on dissimilar steel to aluminum welding

Iron (Fe) and aluminum (Al) alloys rank among the most important engineering materials because they provide good properties at low material cost in many applications [1]. Fe is the primary constituent of steels, which are versatile in structural applications where good creep resistance, formability or high strength are required [2,3]; Al alloys can provide excellent value in applications where low density and/or good corrosion resistance are desired [4,5]. Dissimilar joints between Fe and Al alloys are of significant importance due to the ubiquity of these materials in engineering applications. The ability to form dissimilar joints between Fe and Al alloys is attractive because such bonds offer design engineers flexibility in many situations. While there is the obvious case of improving the strength-to-weight ratio in construction and transportation systems [6,7], there also exist many other situations in which a good bond between Fe and Al alloys is highly desirable, such that the differing material properties of Al and Fe/steel may be exploited. For example, such joints may simultaneously provide high thermal conductivity and high-temperature corrosion resistance in household applications [8] as well as in the chemical industry [9]. In addition, they are used in the smelting production of Al [10]. While the specific properties that define a “good” bond vary between applications, it is unisersally acknowledged that joining of Fe and Al alloys is hindered by the large difference in melting temperatures, the difference in mechanical properties, and because of the formation of brittle intermetallic phases. Here, the formation of intermetallic reaction layers was investigated for interdiffusion between a low-carbon steel and commercially pure aluminum (99.99%) and between a low-carbon steel and an aluminum–silicon alloy (Al–5 wt.% Si). Solid/solid, solid/semi-solid and solid/liquid diffusion couples were produced at both 600 and 675°C. The total width of the reaction layer is governed mainly by the parabolic diffusion-controlled growth of the g phase (Al5Fe2), which exhibits orientation-dependent growth kinetics. The addition of
Si to Al, which is known to decelerate reaction layer growth in interdiffusion experiments with Al melts, was found to accelerate the reaction layer growth in solid/semi-solid interdiffusion experiments. This phenomenon is discussed in light of previous atomistic explanations and the apparent activation energy calculated for the growth of the g phase (Al5Fe2). See also details in :
Acta Materialia 59 (2011) 1586-1600 H. Springer, A. Kostka, E.J. Payton, D. Raabe, A. Kaysser-Pyzalla, G. Eggeler On the formation and growth of intermetallic phases during interdiffusion between low-carbon steel and aluminum alloys. 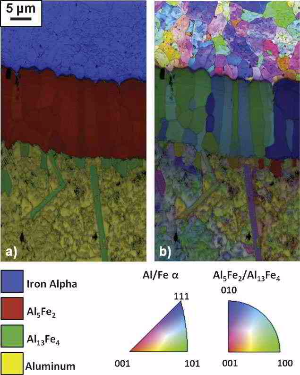 Agnieszka Szczepaniak, Jianfeng Fan, Aleksander Kostka and Dierk Raabe ADVANCED ENGINEERING MATERIALS 2012, 14, No. 7, page 464 On the Correlation Between Thermal Cycle and Formation of Intermetallic Phases at the Interface of Laser-Welded Aluminum-Steel

A laser beam welding process via heat conduction was applied to join DC01 steel with aluminum (Al) in overlap configuration without filler wire. The effect of the applied laser power (1.7, 1.8, 2.1, and 2.4 kW) on the formation and evolution of the interfaces between steel and Al was analyzed. Two
intermetallic compounds were found at the interface, namely, one adjacent to the steel layer (Al5Fe2) and one close to the solidified Al (Al13Fe4). The thickness of the intermetallic reaction layer increases with laser power, while the morphology of its individual components evolves due to differences in accumulated thermal cycles. Correlations between simulations and measurements show that the peak
temperature has significantly stronger influence on the thickness of the intermetallic reaction layer than cooling time and the integral of temperature over the time. Shear/tensile strength tests reveal that all the specimens fail in the Al 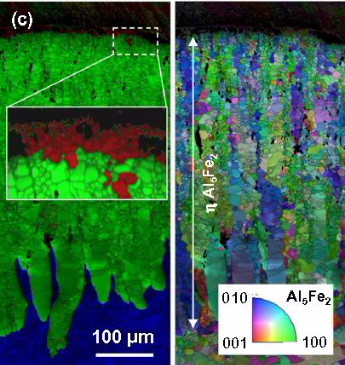 Acta Materialia 96 (2015) 203-211 H. Springer, A. Szczepaniak, D. Raabe On the role of zinc on the formation and growth of intermetallic phases during interdiffusion between steel and aluminium alloys 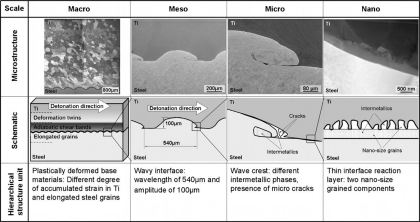 The microstructure of explosive cladding joints formed among parallel Ti and steel plates was examined by electron microscopy. The bonding interface and the bulk materials around it form pronounced hierarchical microstructures. This hierarchy is characterized by the following features: at the mesoscopic scale
of the hierarchy a wavy course of the interface characterizes the interface zone. This microstructure level is formed by heavy plastic shear waves wavelength≈0.5mm) which expand within the two metal plates during the explosion parallel to the bonding interface. At the micro-scale range, intermetallic inclusions (size≈100–200m) are formed just behind the wave crests on the steel side as a result of partial melting. Electron diffraction revealed FeTi and metastable Fe9.64Ti0.36. Most of the observed phases do not appear in the equilibrium Fe–Ti phase diagram. These intermetallic inclusions are often accompanied by micro-cracks of similar dimension. At the smallest hierarchy level we observe a reaction layer of about 100–300nm thickness consisting of nano-sized grains formed along the entire bonding interface. Within that complex hierarchical micro- and nanostructure, the mesoscopic regime, more precisely the type and brittleness of the intermetallic zones, seems to play the dominant role for the mechanical behavior of the entire compound.