What is Metastability Alloy Design?

Metastability is an alloy design principle that exploits the thermodynamic weakness of metallic materials against phase transformation. While most materials are thermodynamically metastable at some stage during synthesis and service, metastability alloy design targets cases where metastable phases are not coincidentally inherited from processing, but rather are engineered, e.g. by alloying, size effects or microstructure. Specifically, metastability alloy design builds on at compositional (partitioning), thermal (kinetics), and microstructure (size effects and confinement) tuning of metastable phases so that they can
trigger athermal transformation effects when mechanically, thermally, or electromagnetically loaded.

Such an alloy design concept works both at the bulk scale and also at a spatially confined microstructure scale, such as at lattice defects. In the latter case, local stability tuning works primarily through elemental partitioning to dislocation cores, stacking faults, interfaces, and precipitates. Depending on stability, spatial confi nement, misfi t, and dispersion, both bulk and local load-driven athermal transformations can equip alloys with substantial gain in strength, ductility, and damage tolerance. Examples include self-organized metastable nanolaminates, austenite reversion steels, metastable medium- and high-entropy alloys, as well as steels and titanium alloys with martensitic phase transformation and twinning-induced plasticity effects. 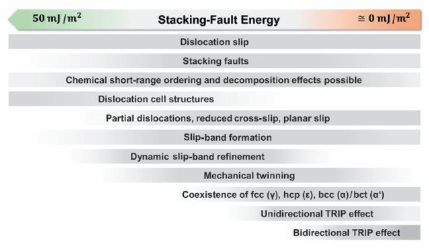 What is the idea behind alloys in a thermodynamically metastable state?

Most materials are in a thermodynamically metastable state in some stages during synthesis, processing, and service. Microstructure is actually defined as the collective ensemble of all features in a material that are not in thermodynamic equilibrium (i.e., interfaces, dislocations, stacking faults, composition gradients, and dispersed precipitates). These defects, though not in thermodynamic equilibrium, are often retained in materials due to their local mechanical stability and slow relaxation and annihilation kinetics. As these microstructure ingredients endow most materials (e.g., metallic alloys) with
their characteristic good load-bearing properties, thermodynamic metastability is a desired material state and the main target behind practically all processing steps that follow primary synthesis. In contrast, alloys in thermodynamic equilibrium are a rare exception with little relevance for applications. While the arrangement and density of specifi c defect classes such as dislocations and grain boundaries are frequently addressed topics in microstructure research, less attention has been placed on the role of bulk and local chemical composition and partitioning effects on phase metastability, and its relation to the activation of specifi c deformation mechanisms. This applies particularly to scenarios where site-specific and self-organized equilibrium segregation to lattice defects changes their local chemical composition, leading to regions
of spatially confi ned metastability. Such a trick, also referred to as segregation engineering, can be utilized for enabling activation of athermal transformation effects that are spatially confined only to the metastable defect region. Athermal or diffusionless transformation mechanisms of particular interest in this context include martensitic and twinning-induced plasticity.

Even lattice defect regions can become metastable when decorated.
While bulk composition tuning for achieving well-defined phase metastability is a typical design target (e.g., for transformation induced plasticity [TRIP],  twinning induced plasticity [TWIP], duplex, and quench-partitioning steels, as well as for some high-entropy alloys) it is less commonly used for designing specific chemical decoration states at lattice defects. Spatially confined or compositionally graded metastable states are sometimes accidentally inherited
from solidification and processing, but they are usually not engineered.
The aim of the metastability alloy design (MAD) concept lies in the compositional, thermal, and microstructure tuning of metastable phase states for triggering diffusive (e.g., spinodal decomposition, discontinuous precipitation, and nucleation) or athermal transformation mechanisms (TRIP and TWIP),
particularly when exposed to mechanical, radiation, or thermal loads. Here, we focus particularly on the latter group, namely, athermal transformations in crystalline metastable materials, and show that the effects arising from corresponding composition tuning can reach far beyond the two wellknown
bulk mechanisms (TRIP and TWIP).
An interesting feature of metastable alloy systems is that the thermodynamic weakness of phases (i.e., their lack of stability) triggers deformation mechanisms, which lead to higher strength and damage tolerance. This is due to the fact that athermal deformation mechanisms are often not commensurate.
This means that they require activation of additional deformation mechanisms such as dislocation slip and secondary twinning to accommodate and compensate for local shape and volume mismatch upon deformation. Athermally triggered deformation also introduces a size effect into strain hardening
as it occurs in confined regions, entailing high deformation activity, particularly at the interfaces between the host matrix and the transformed volume portion . High populations of geometrically necessary dislocations (i.e., dislocation
populations accommodating local lattice curvature) are often associated with this confinement.1 Of particular interest are microstructure design approaches where spatially confined metastability is targeted. In these cases, local stability tuning
is achieved through segregation and partitioning to dislocation cores, interfaces, stacking faults, or precipitate phases. When exposed to mechanical stimulus, athermal transformation can be triggered at dimensions as small as a few atomic layers. This gives rise to a double size effect where both the athermally
transformed volume and the accommodation plasticity surrounding it are size dependent. An important feature of (partially) metastable microstructures
is that their athermal transformation is activated through deformation. This feature can be utilized to shift the host phase’s degree of metastability into a load range where local material weakening sets in. The onset of athermal transformation events then provides additional strain hardening, particularly in those regions and at such load stages where the material is highly deformed and stressed such as shear bands, crack tips, and notches. This strategy provides strain hardening, particularly in weakened microstructure regions where it is most needed. Metastability alloy design can lend a certain self-healing capacity to metallic materials as the associated athermal transformations become active first in locally softened regions that experience high local peaks in deformation and load. Also, they can provide volume mismatch as the volume occupation for the athermally formed new phase is in some cases either larger or smaller than that of the matrix phase, creating local compressive or tensile stress fields. Compressive stresses in particular can assist in closing, blunting, or branching crack tips. This applies specifically to alloys that contain interstitial elements that— when frozen-in upon transformation—create tunable volume mismatch between the host and the product phase. Depending on stability, spatial confinement, misfit, and dispersion, both bulk and local load-driven transformation events can provide substantial gains in strength, ductility, damage tolerance, and functional properties. Examples include self-organized bone-like metastable nanolaminates, nanostructured austenite reversion steels, metastable high- and medium-entropy alloys, and steels and titanium alloys with nanoscale TRIP and TWIP effects.