Atom probe tomography of a pearlitic steel after drawing, carbon and carbides are shown

The term ‘Pearlite’ or ‘pearlitic steel’ refers to an iron-based composite state. The pearlitic microstructure is characterized by the joint arrangement of thin layers of ferrite and cementite, formed by a eutectoid reaction from austenite.

The lamellar appearance of pearlite is a bit misleading since the individual lamellae within a pearlite colony are actually inter-connected in three dimensions; a colony is an interpenetrating bicrystal of ferrite and cementite. ﻿

How is pearlite formed ?

Pearlite is formed during sufficiently slow cooling ﻿in an iron-carbon system at the eutectoid point in the Fe-C phase diagram (723 °C, eutectoid temperature﻿). In a pure Fe-C alloy it contains about 88 vol.% ferrite and 12 vol.% cementite. Pearlite is known for being tough and, when highly deformed, extremely strong.

What is the structure of pearlite ?

Currently pearlitic steels are the strongest and yet ductile commercial bulk materials one earth. When studied under a microscope, it has a very distinctive appearance created by the thin lamellar bands. The term ‘pearlite’ is a reference to the appearance of this alloy phase when studied under the microscope. It resembles mother of pearl (nacre), a natural lamellar structure seen among some shellfish. However, one should not that mother of pearl is created through the natural deposition of successive layers, rather than as the result of special treatment of a eutectoid mixture, but it shares the trait of hardness and strength created by thin subsequent layers of material.

Pearlite was first identified by Henry Clifton Sorby and hence it was initially named sorbite, however the similarity of microstructure to nacre and especially the optical effect caused by the scale of the structure made the alternative name 'pearlite' more popular.

How can segregation assist in stabilizing nanocrystalline materials - here specifically in pearlite ?

How can we make ultra-strong and damage tolerant metallic bulk materials?

Structural materials used for safety critical applications require high strength and simultaneously high resistance against crack growth, referred to as damage tolerance. However, the two properties typically exclude each other and research efforts towards ever stronger materials are hampered by drastic loss of fracture resistance. Therefore, future development of novel ultra-strong bulk materials requires a fundamental understanding of the toughness determining mechanisms. As model material we use today’s strongest metallic bulk material, namely, a nanostructured pearlitic steel wire, and measured the fracture toughness on micron-sized specimens in different crack growth directions and found an unexpected strong anisotropy in the fracture resistance. Along the wire axis the material reveals ultrahigh strength combined with so far unprecedented damage tolerance. We attribute this excellent property combination to the anisotropy in the fracture toughness inducing a high propensity for microcrack
formation parallel to the wire axis. This effect causes a local crack tip stress relaxation and enables the high fracture toughness without being detrimental to the material’s strength. 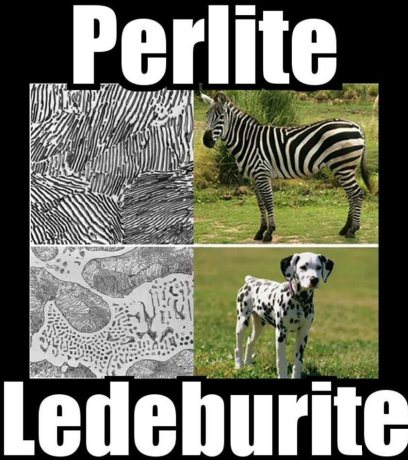 Can cementite in pearlite decompose under strong deformation?

In this study, we combined atom-probe tomography (APT) and synchrotron X-ray diffraction (XRD) to study the carbon supersaturation of ferrite for two pearlitic steel-wire compositions – eutectoid and hypereutectoid. Knowledge of the carbon accommodation in the ferrite provides control to design the strength and ductility of nanostructured pearlitic steels. True drawing strains, ε, of 0 to 6.52 were analyzed, exceeding by far the drawing strains studied previously.[22] The two compositions, the high strains, the combination of advanced chemical and structural characterization methods, and a supporting ab-initio-based theoretical description show that a new mechanism of martensite formation is triggered under the extreme deformation conditions that occur in the SPD-induced structural refinement of ultrahigh strength pearlitic steels. Deformation-driven nanoscale phase transformation provides a new way to tailor the mechanical properties of nanostructured steels and steel surfaces.

How can we measure grain boundary segregation in nanocrystalline material at the atomic-scale ?

Grain boundary segregation leads to nanoscale chemical variations that can alter a material's performance by orders ofmagnitude (e.g., embrittlement). To understand this phenomenon, a large number of grain boundaries must be characterized in terms of both their five crystallographic interface parameters and their atomic-scale chemical composition. We demonstrate how this can be achieved using an approach that combines the accuracy of structural characterization in transmission electron microscopy with the 3D chemical sensitivity of atom probe tomography.We find a linear trend between carbon segregation and the misorientation angle ω for low-angle grain boundaries in ferrite, which indicates that ω is the most influential crystallographic parameter
in this regime. However, there are significant deviations from this linear trend indicating an additional strong influence of other crystallographic parameters (grain boundary plane, rotation axis). For high-angle grain boundaries, no general trend between carbon excess and ω is observed; i.e., the grain boundary plane and rotation axis have an even higher influence on the segregation behavior in this regime. Slight deviations from special grain boundary configurations are shown to lead to unexpectedly high levels of segregation. 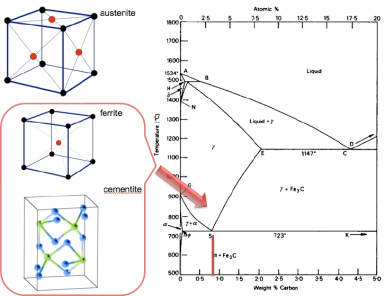 Thermodynamics of carbon solubility in ferrite and vacancy formation in cementite in strained pearlite
In order to investigate the thermodynamic driving force for the experimentally observed accumulation of C in ferritic layers of severely plastically deformed pearlitic wires, the stabilities of C inte
Acta Mater 61 (2013) 1773-solute-C-in-pe[...]
PDF-Dokument [1.0 MB] 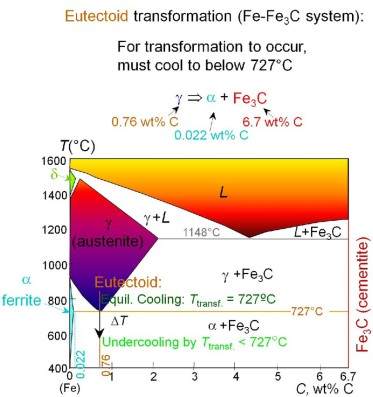 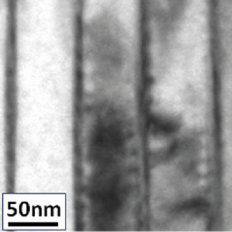 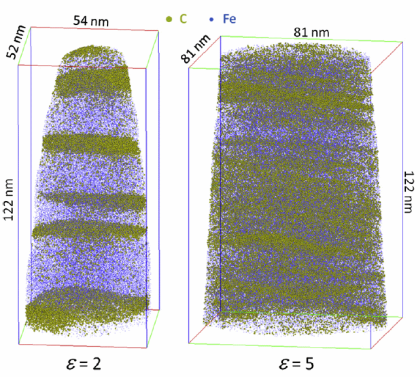 Carbon-supersaturated nanocrystalline hypereutectoid steels with a tensile strength of 6.35 GPa were produced from severely cold-drawn pearlite. The nanocrystalline material undergoes softening upon annealing at temperatures between 200 and 450°C. The ductility in terms of elongation to failure exhibits a non-monotonic dependence on temperature. Here, the microstructural mechanisms responsible for changes in the mechanical properties were studied using transmission electron microscopy (TEM), TEM-based automated scanning nanobeam diffraction and atom probe tomography (APT). TEM and APT investigations of the nanocrystalline hypereutectoid steel show subgrain coarsening upon annealing, which leads to strength reduction following a Hall–Petch law. APT analyzes of the Mn distribution near subgrain boundaries and in the cementite give strong evidence of capillary-driven subgrain coarsening occurring through subgrain boundary migration. The pronounced deterioration of ductility after annealing at temperatures above 350 °C is attributed to the formation of cementite at subgrain boundaries. The overall segregation of carbon atoms at ferrite subgrain boundaries gives the nanocrystalline material excellent thermal stability upon annealing. 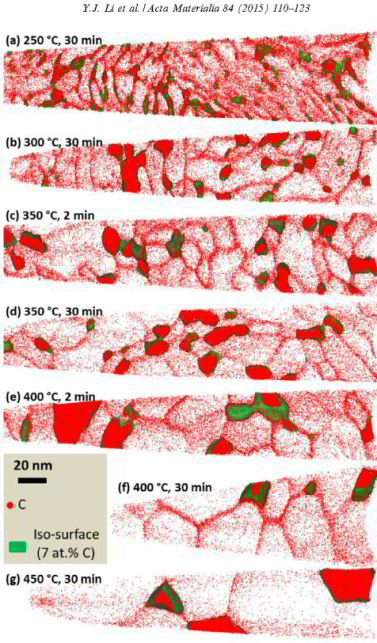 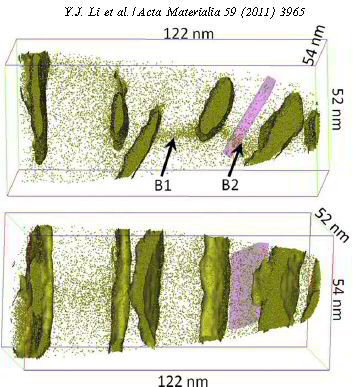 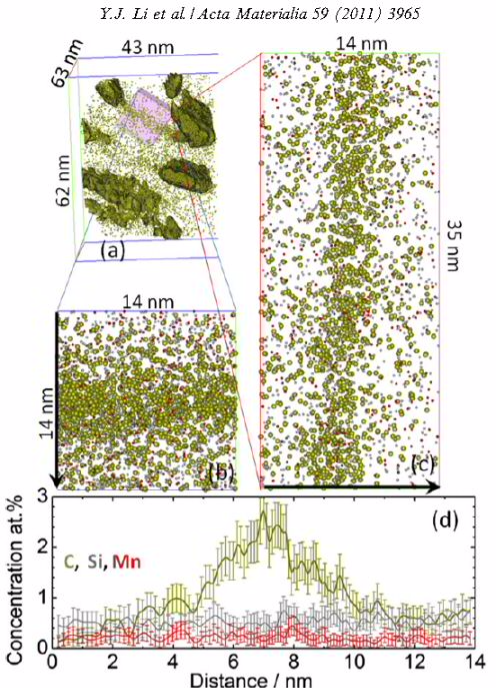 Pearlitic steel can exhibit tensile strengths higher than 5 GPa after severe plastic deformation, where the deformation promotes a refinement of the lamellar structure and cementite decomposition. However, a convincing correlation between deformation and cementite decomposition in pearlite is still absent. In the present work, a local electrode atom probe was used to characterize the microstructural evolution of pearlitic steel, cold-drawn with progressive strains up to 5.4. Transmission electron microscopy was also employed to perform complementary analyses of the microstructure. Both methods yielded consistent results. The overall carbon content in the detected
volumes as well as the carbon concentrations in ferrite and cementite were measured by atom probe. In addition, the thickness of the cementite filaments was determined. In ferrite, we found a correlation of carbon concentration with the strain, and in cementite, we found a correlation of carbon concentration with the lamella thickness. Direct evidence for the formation of cell/subgrain boundaries in ferrite and segregation of carbon atoms at these defects was found. Based on these findings, the mechanisms of cementite decomposition
are discussed in terms of carbon–dislocation interaction.

Hypereutectoid steel wires with 6.35 GPa tensile strength after a cold-drawing true strain of 6.02 were annealed between 300 and 723 K. The ultrahigh strength remained upon annealing for 30 min up to a temperature of 423 K but dramatically decreased with further increasing temperature. The reduction of tensile strength mainly occurred within the first 2–3 min of annealing. Atom probe tomography and transmission electron microscopy reveal that the lamellar structure remains up to 523 K. After annealing at 673 K for 30 min, coarse hexagonal ferrite (sub)grains with spheroidized cementite, preferentially located at triple junctions, were observed in transverse cross-sections. C and Si segregated at the (sub)grain boundaries, while Mn and Cr enriched at the ferrite/cementite phase boundaries due to their low mobility in cementite. No evidence of recrystallization was found even after annealing at 723 K for 30 min. The stability of the tensile strength for low-temperature annealing (<473 K) and its dramatic drop upon high-temperature annealing (>473 K) are discussed based on the nanostructural observations. 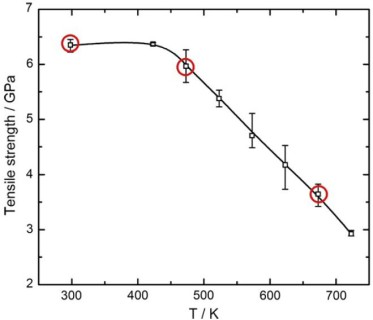 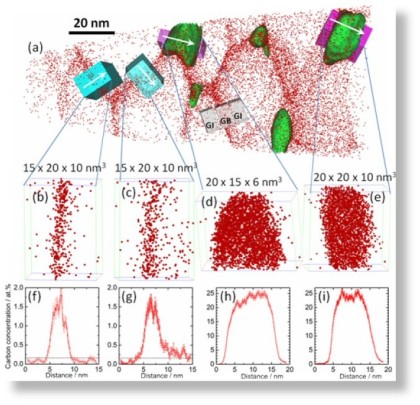