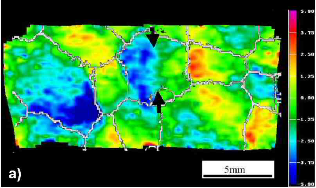 There has been a growing number of detailed grain-level deformation studies carried out polycrystal specimens containing a relatively small number of grains (typically between 10 and 100 grains). Such samples are referred to as oligocrystals. The main motivation for such studies has been to understand the local deformation behavior of individual grains in such an aggregate. The interaction among grains leads to a locally, non-uniform plastic deformation state despite being subjected to a uniformly applied external stress. From an experimental viewpoint, thin polycrystal specimens are particularly useful since their microstructures can be accurately characterized with relative ease from both sides, based solely on the surface strains. The typical approach adopted to explicitly model the grains are Crystal Plasticity Simulations.
Consequently, one-to-one comparisons can be made between experimentally measured data with model predictions. Such studies enable existing models to be validated and improved so that they can be used to explore more complex polycrystalline aggregate systems.

In total a more thorough and clear understanding of grain-scale plasticity phenomena has implications for two aspects of metal research:

(i) better understanding of grain-scale crystal mechanics will lead to the further improvement of microstructure based models for strain hardening, ductility and damage of polycrystalline metals which take into account grain interaction effects;

(ii) the same understanding will also result in the development of crystal plasticity models that are capable of predicting, to much higher accuracy than is presently possible, the texture evolution as also needed as input to models predicting recrystallization textures. 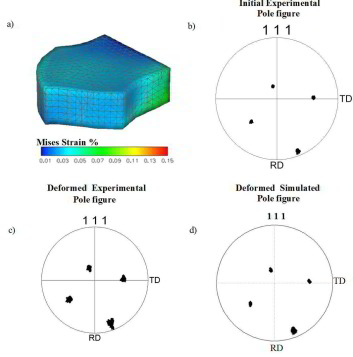 In this project a flat Aluminum polycrystal has been plastically deformed via uniaxial tensile loading in order to impose an external triaxial-strain state. The grains did not have a columnar shape, i.e. the grain boundaries were inclined between the two surfaces. The spatial distribution of the accumulated plastic surface strains in the deformed polycrystal has been determined by measuring the displacement fields using a digital image correlation technique. For this purpose digital stereological image pairs were taken from both faces of the tensile sample at the beginning and after each deformation step. The three components of the plastic displacement vector field were used to derive the surface portion of the plastic strain tensor field. The microtexture of the specimen, before and after deformation was determined via electron back scattering diffraction conducted in a scanning electron microscope. The surface roughness on both the faces of the sample after deformation was determined by confocal white light microscopy. The experimental results are discussed with the help of a corresponding crystal plasticity finite element simulation. 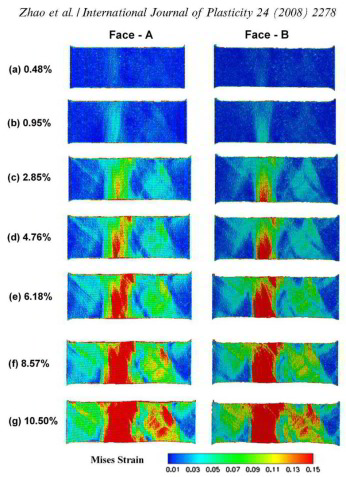 A single crystal deforms anisotropically along specific slip systems, the selection of which is determined by the grain orientation.  Polycrystalline specimen composed of several grains deforms heterogeneously over grain-by-grain as a result of the anisotropic deformations of the individual grains. A detailed knowledge of the orientation dependence on microstructural evolution during deformation is therefore very important for the development of microstructural models of evolution.

The tendency to accommodate the imposed gradient free external load heterogeneously among the crystals can differ significantly, depending on the texture of the material. For instance, it has been shown that if common texture components (e.g. copper, brass, and cube rolling textures in FCC metals) are considered separately, the extent of in-grain subdivision (if any) leading to strain localization, can vary significantly. Inevitably, the initiation and subsequent development of such localized deformation patterns is strongly influenced by the microstructure, particularly so in the case of somewhat idealized polycrystalline systems. For example, if samples containing a small number of grains are derived from a directionally solidified material, the localization process is expected to be particularly sensitive to the relative grain sizes, arrangement and in-plane lattice misorientation between adjacent grains (intergranular) and within grains (intragranular).

The mechanical response of multiphase alloys is governed by the microscopic strain and stress partitioning behavior among microstructural constituents. However, due to limitations in the characterization of the partitioning that takes place at the submicron scale, microstructure optimization of such alloys is typically based on evaluating the averaged response, referring to, for example, macroscopic stress–strain curves. Here, a novel experimental–numerical methodology is introduced to strengthen the integrated understanding of the
microstructure and mechanical properties of these alloys, enabling joint analyses of deformation-induced evolution of the microstructure, and the strain and stress distribution therein, down to submicron resolution. From the experiments, deformation-induced evolution of (i) the microstructure, and (ii) the local strain distribution are concurrently captured, employing in situ secondary electron imaging and electron backscatter diffraction (EBSD) (for the former), and microscopic-digital image correlation (for the latter). From the simulations,
local strain as well as stress distributions are revealed, through 2-D full-field crystal plasticity (CP) simulations conducted with an advanced spectral solver suitable for heterogeneous materials. The simulated model is designed directly from the initial EBSD measurements, and the phase properties are obtained by additional inverse CP simulations of nanoindentation experiments carried out on the original microstructure. The experiments and simulations demonstrate good correlation in the proof-of-principle study conducted here on a martensite–ferrite dual-phase steel, and deviations are discussed in terms of limitations of the techniques involved. Overall, the presented integrated computational materials engineering approach provides a vast amount of well-correlated structural and mechanical data that enhance our understanding as well as the design capabilities of multiphase alloys. 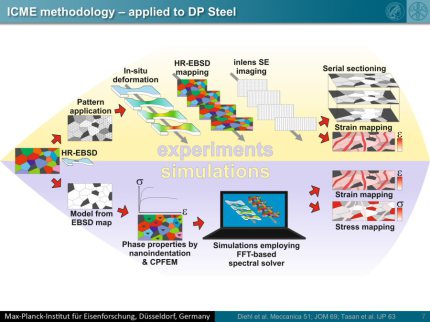 ICME and digital twin for steels: Digtal Image Correleation and Crystal Plasticity simulations for the experimental–simulation analysis of stress and strain partitioning in multiphase alloys.

In this project aluminum polycrystals with columnar coarse grains were plastically compressed in a lubricated channel die experiment. The resulting spatial distribution of the accumulated plastic surface strains has been determined by measuring the displacement fields using photogrametry, a technique also referred to as digital image correlation or short DIC. For this purpose digital stereological image pairs of the sample surface were taken at the beginning and after each deformation step. The displacement field has then been derived from them by applying an image analysis method based on pattern recognition to the data before and after straining. The three components of the plastic displacement vector field were used to derive the surface portion of the
plastic strain tensor field. The microtexture of the specimens were in the same regions determined by the analysis of electron backscattering patterns
obtained in a scanning electron microscope. The experiments were interpreted by comparing them to the corresponding crystal plasticity finite element simulations. 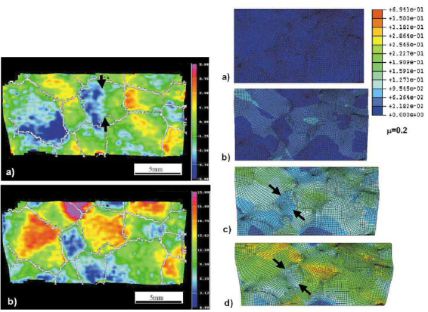 Aluminum bicrystals with symmetric <1 1 2> tilt boundaries and misorientations of 8.7° (small angle), 15.4° (transition), and 31.5° (large angle) were deformed in a channel die experiment in order to study the influence of misorientation on the deformation at grain boundaries. Samples were characterized by DIC based strain measurements and microtexture mappings. The experiments were compared to crystal plasticity finite element simulations. We studied strain heterogeneity at the macroscopic and at the microscopic level. Even macroscopically homogeneous areas showed microscopic heterogeneity in the form of bands of different sets of glide systems. We observed clear effects of the
grain boundary misorientation on the deformation kinematics close to the boundaries. The 8.7° grain boundary did not show any orientation change which was interpreted in terms of free dislocation penetration. In contrast, the 15.4° and
31.5° bicrystals showed orientation changes which were attributed to dislocation pile-ups. 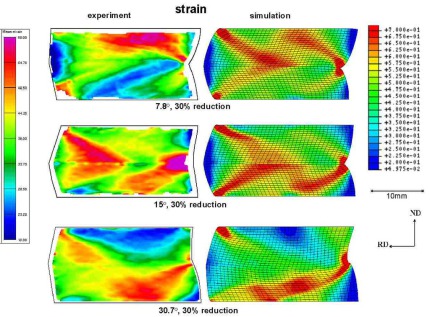