Why is the interaction between hydrogen and high entropy alloys relevant?

Hydrogen absorption followed by embrittlement can lead to the sudden and complete loss of the ductility of many high strength metallic materials. They loose their load-bearing capability and fail catastrophically.

Hydrogen embrittlement is among the most complex and least understood material decay and damage phenomena. As hydrogen is hard to detect the underlying damage mechanisms are challenging to be revealed.

Hydrogen exposure of materials oocurs in multiple energy harvesting and conversion applications such as catalysis, oil and gas tapping and transport and in practailly all process steps associated with hydrogen-based energy processes.

Hence, materials solutions that can withstand hydrogen chgaring are an essential challenge for any hydrogen-based energy solution. Some high entropy alloys have shown promising resistance to hydrogen attack.

Which are the prevalent hydrogen embrittlement phenomena in high-entropy alloys?

What are possible reasons for the enhanced hydrogen embrittlement resistance of certain high-entropy alloys?

1) Hydrogen reduces the stacking fault energy of many FCC high-entropy alloys. This effect enhances the trend to form twins which enhance strain hardening under mechnaical loads.

2) The complex atomic environment in high-entropy alloys might promote better trappng of hydrogen inside the materials.

Literature on the hydrogen embrittlement resistance of high-entropy alloys 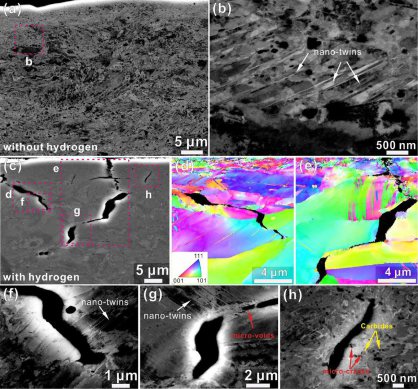 ECCI & EBSD analysis of the microstructures close to the surface of the tensile tested interstitial HEA samples both, with and without hydrogen charging. 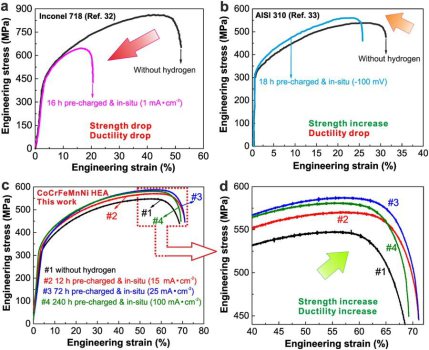 How does hydrogen act against hydrogen embrittlement in high-entropy alloys?

In this project we reveal that certain high-entropy alloys can show good damage tolerance at cryogenic temperatures. We found that this essential property can be maintained even when exposing the equiatomic CoCrFeMnNi alloy to the most detrimental environmental condition known to metals, hydrogen. This is enabled by a self-accommodation mechanism: the higher the local hydrogen content, the higher the twin formation rate as hydrogen reduces the stacking fault energy. Thus, the hydrogen’s through thickness diffusion gradient translates into a nano-twin gradient that counteracts material weakening by enhanced local strengthening. The concept targets applications under harsh and cryogenic conditions, such as encountered in arctic, offshore, energy and liquid gas chemical processing, and transport operations. The new mechanism opens a pathway to the design of alloys that withstand heavy mechanical loading under cryogenic and hydrogen-containing conditions. 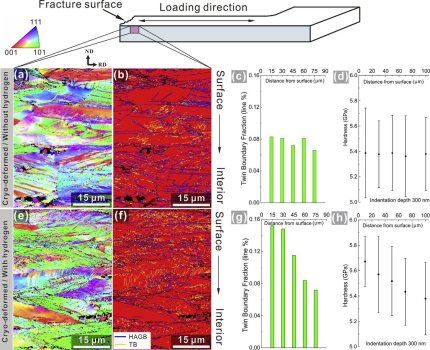