About 100 Mt (million metric tons) of aluminum are currently produced per year, of which ~35% comes from scrap while ~40% has already been scrapped somewhere during preoduction. Aluminum reduces energy consumption in many products , e.g. in lightweight transport, packaging and construction, due to its low mass density (2.7 kg dm-3). It is also used for low-resistive, low-weight electrical conduction, as with 37×106 A (Vm)-1 it reaches 64% of the conductivity of pure Cu with about 3 times less mass. On the other hand, aluminum is also one of the greatest greenhouse gas (GHG) producers and energy-intensive industrial metals produced from ores. 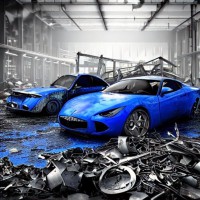 This means that aluminum from primary production generates about 12-16.5 t of GHG per t of metal produced. About 65% of these emissions occur because ~67% of the electricity used for electrolysis is produced from fossil fuels. Aluminum production requires ~13 Exa J energy per year, which is ~1% of total global energy consumption. The synthesis of aluminum also creates multiple harmful by-products during mining and electrolysis. This impact is accelerating due to the rapid growth of the world population (and the enormous growth of the middle class, now estimated at half of the total population) and per-capita consumption of aluminum, which is driven by several current trends in transportation, urbanization, electrification and manufacturing. For the first time in history, though the production of aluminum is now facing sustainability limits.

Strategies for improving the sustainability of structural metals

How often can Aluminium be recycled?

Aluminum is in principle an infinitely recyclable material: today, about 75% of all the aluminum produced in history – nearly a billion metric tons – is still in use. Recycling involves re-melting the metal, which requires only 5% of the energy used to make new aluminum from bauxite ore: the primary synthesis of Al from ores expends 45 kWh/kg because of the large enthalpy of its oxide, and about 12 kg CO2/kg, while re-melting Al scrap (secondary synthesis) expends only 2.8 kWh/kg because of its low melting point (660°C), and about 0.6 kg CO2/kg. This means that recycling has the potential to shift aluminum’s energy and carbon balance substantially towards much greater sustainability.

On average, a third of the aluminum used today is produced from recycled scrap, although this fraction is predicted to rise to 50% by 2050, according to recent data (2019) from the International Aluminum Institute. The huge differences between primary and secondary synthesis in terms of GHG and energy consumption make aluminum alloys, as an important pillar of a circular economy, important subjects for sustainable metallurgy research.

In scrap recycling a differentiation must be made between pre-consumer scrap, produced during manufacturing and often featuring well-defined alloy classification, and mixed, low-quality post-consumer scrap, which must be sorted before remelting. 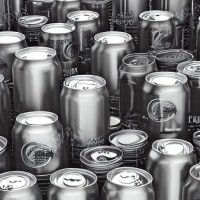 Which are best practise examples for Aluminium recycling?

A good example of circularity is aluminum beverage cans. In some regions, the recycling rates for such alloy grades reach 95%. However, even though used beverage cans (UBC) are easily collected, have a short lifetime and can theoretically be made of a single alloy (today two are typically used) [31], the can-to-can cycle is still not a closed loop. An analysis by Reuters, using data from the Carbon Trust, shows that the overall sustainability of aluminum can packaging depends greatly on the recycled fraction and on the origin of the energy used for melting and for generating the additional primary material (see Figure).