Martensitic materials result from a specific type of phase transformation that produces the structure known as martensite. Martensitic transformations were first observed and described in steels although they occur also in may other materials, such as e.g. in Titanium alloys.  It received its name from Professor Adolf Martens who suggested that the martensitic reaction is displacive in nature and forms through a highly ordered crystallographic shear transformation, which involves no change in chemical composition or atomic diffusion, i.e. no atomic redistribution between phases. Recent atom probe tomographic analysis reveals though that atomic relaxation and short range diffusion can take  place during martensitic transformations. However, many martensitic reactions normally occur athermally, i.e.  via a diffusionless transformation or with only very local diffusion and martensite is then formed upon cooling from a higher temperature phase which is referred to as the parent phase.  In steels this parent phase is known as austenite and this is also the term often used to describe the parent phase in shape memory alloys although technically speaking this is mostly incorrect.
Although the early work describes the formation of martensite as being free from nucleation and growth, it is now accepted that the basic characteristics of martensite type transformations are in fact consistent with the general nucleation - growth framework. The martensite reaction in plain carbon steels proceeds from an equilibrium austenite phase to a non-equilibrium (metastable) low temperature martensite phase. Since the martensite is metastable it will only form through very rapid cooling. In fact the rate of growth is so high in these reactions that the volume change associated with the reaction is controlled almost entirely by the nucleation rate.
In many martensitic transformations however, the low temperature phase is itself
an equilibrium phase rather than a metastable one. In these cases the phase
transformation occurs by the fast growth martensitic mode even with very slow
cooling rates. The transformations in these systems occur martensitically but
there is no need for a rapid quench to secure the fast growth mode as there is in
steel. This is the case with shape memory alloys and many pure elements.

In our work we are interested in different types of martensitic alloys, such as

Owing to the layer-by-layer build-up of additively manufactured parts, the deposited material experiences a cyclic re-heating in the form of a sequence of temperature pulses. In the current work, this “intrinsic heat treatment (IHT)” was exploited to induce the precipitation of NiAl nanoparticles in an Fe-19Ni-xAl (at%)
model maraging steel, a system known for rapid clustering. We used Laser Metal Deposition (LMD) to synthesize compositionally graded specimens. This allowed for the efficient screening of effects associated with varying Al contents ranging from 0 to 25 at% and for identifying promising concentrations for further studies. Based on the existence of the desired martensitic matrix, an upper bound for the Al concentration of 15 at% was defined. Owing to the presence of NiAl precipitates as observed by Atom Probe Tomography (APT), a lower bound of 3e5 at% Al was established. Within this concentration window, increasing the Al concentration gave rise to an increase in hardness by 225 HV due to an exceptionally high number density of 10^25 NiAl precipitates per m3, as measured by APT. This work demonstrates the possibility of exploiting the IHT of the LMD process for the production of samples that are precipitation strengthened during the additive manufacturing process without need for any further heat treatment. 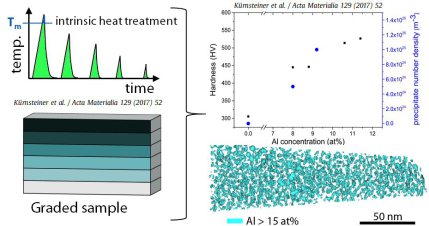 How to describe the hierarchical nature of lath martensite considering packets, blocks and laths

The established terminology to describe martensite, specifically lath martensite,
has been continuously developing over the years with the gradually improving different  types of experimental observations which step-by-step gave additional insights that  some of the original terminology did not contain or reflect.

This means that our knowledge about martensite today is more precise and detailed compared to the rough and in part historical categories and terms we use to describe it.
Hence these are some of the typical terms that we use in metalllurgy which are relatively ill-defined owing to the long history of being studied.

For example regarding the crystallography of martensite most of the original pioneering works were based on transmission electron microscopy observations.
TEM provides sufficient spatial resolution to resolve fine martensitic features such as e.g. laths, however, it provides only limited statistics of larger martensitic constituents (e.g. prior austenite grains) due to its limited field of view arising from the specimen and beam geometries. It is the development of the electron backscatter diffraction (EBSD) technique that enabled the systematic  characterization of the hierarchical martensitic microstructure spanning multiple scales, i.e. ranging from prior austenite grains of hundreds of microns down to laths of tens of nanometers.
Yet, it is also clear that the standard 2D EBSD-based analysis provides a rather simplified representation of the lath martensite crystallography.
For example, 3D EBSD and 3D FIB analyses, as well as TEM observations reveal significant heterogeneities in the size and morphology of martensite sub-units even within a single alloy, which cannot be fully captured by stand-alone 2D investigations. Also, even in optimized conditions, EBSD cannot resolve the fine details of the martensitic sub-structure.
Regarding martensite composition, similar progress was made due to the advances in another key technique, namely, atom probe tomography (APT). Similar to EBSD providing wider access to martensite crystallography, APT triggered investigations of e.g. carbon (C) Cottrell atmospheres, compositional relaxation and segregation, precipitation reactions in martensite and retained as well as reversed austenite layers in martensite. Arguably the most critical among these is the analysis of C in martensite, since interstitial C plays one of the major roles in the properties of martensite From these multiple studies we can in principle use several types of categories when describing  these features in more detail. These are:
Crystallography
Mesoscopic morphology
Interface types 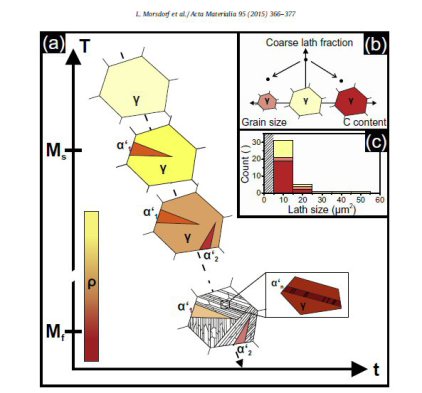 L. Morsdorf et al. / Acta Materialia 95 (2015) 366–377: (a) Schematic representation of the initial and final stages of martensitic transformation in one prior austenite grain along a model time–temperature curve with colorcoded defect density (for simpli

Fundamentals about the hierarchical nature of martensite

To improve the fundamental understanding of the multi-scale characteristics of martensitic microstructures and their micro-mechanical properties, a multi-probe methodology is developed and applied to low-carbon lath martensitic model alloys. The approach is based on the joint employment of electron channeling contrast imaging (ECCI), electron backscatter diffraction (EBSD), transmission electron microscopy (TEM), atom probe tomography (APT) and nanoindentation, in conjunction with high precision and large field-of-view 3D serial sectioning. This methodology enabled us to resolve (i) size variations of martensite sub-units, (ii) associated dislocation sub-structures, (iii) chemical heterogeneities, and (iv) the resulting local mechanical properties. The identified interrelated microstructure heterogeneity is discussed and related to the martensitic transformation sequence, which is proposed to intrinsically lead to formation of a nano-composite structure in low-carbon martensitic steels. 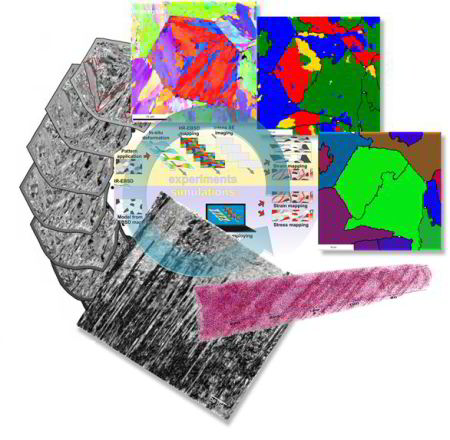 The multi-scale complexity of lath martensitic microstructures requires scale-bridging analyses to better understand the deformation mechanisms activated therein. In this study, plasticity in lath martensite is investigated by multi-field mapping of deformation-induced microstructure, topography, and strain
evolution at different spatial resolution vs. field-of-view combinations. These investigations reveal site-specific initiation of dislocation activity within laths, as well as significant plastic accommodation in the vicinity of high angle block and packet boundaries. The observation of interface plasticity raises several
questions regarding the role of thin inter-lath austenite films. Thus, accompanying transmission electron microscopy and synchrotron x-ray diffraction experiments are carried out to investigate the stability of these films to mechanical loading, and to discuss alternative boundary sliding mechanisms to explain the observed interface strain localization. 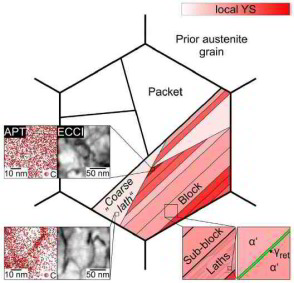 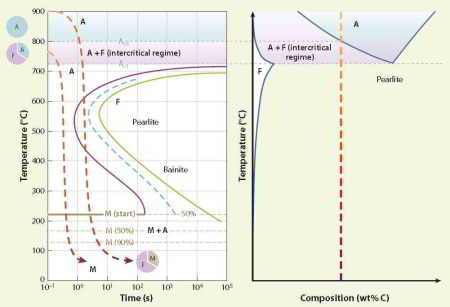 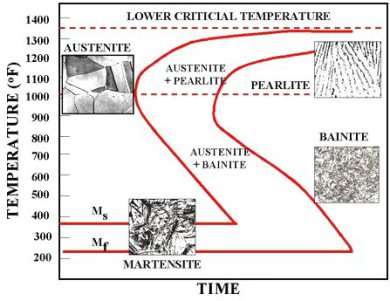 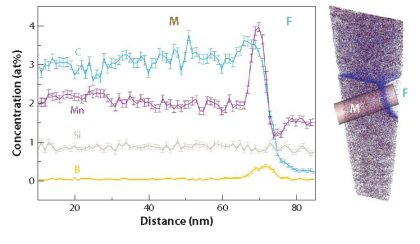 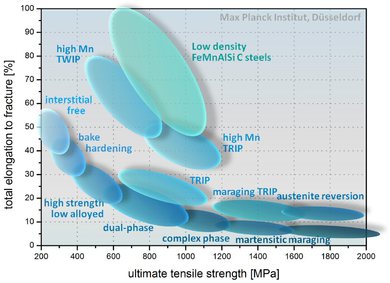