Bainite is a crystalline microstructure feature that forms in steel upon  heating and guided cooling. It is named after Edgar C. Bain, a US metallurgist who worked on the alloying and heat treatment of steel in Pittsburgh in Pennsylvania. Bainite is not a phase in thermodynamic sense but an acicular microstructure that can form in certain steels at temperatures of 250–550 °C, depending on the alloy composition, specifically on the carbon content. It can be formed as a decomposition product form cooling austenite below a critical temperature that depends on the alloy content. Bainite commonly consists of cementite and dislocation-rich ferrite. The high concentration of dislocations in the ferrite present in bainite makes this ferrite hard. 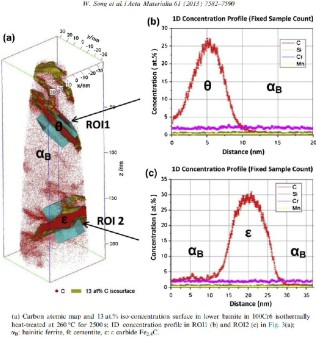 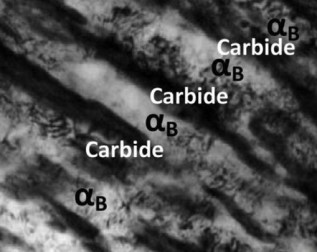 What is the effect of Si on the bainite transformation?

How to simulate deformation and damage in bainite ?

Dual phase steels with microstructures based on bainite as a matrix together with dispersed martensite-austenite (MA) constituents provide the ingredients required for the improvement of the strain capacity and toughness of bainite steels. To fine-tune the alloy design and ensure such novel dual-phase steels have the required mechanical properties, better understanding of the governing deformation micromechanisms is essential. For this purpose, a recently developed joint numerical-experimental approach that involves the integrated use of microscopic digital image correlation analysis, electron backscatter diffraction, and multiphysics crystal plasticity simulations with a spectral solver can be employed. The local strain and stress evolution and microstructure maps of representative microstructural patches were here captured with a high spatial resolution using this approach. A comparison of these maps provides new insights into the deformation mechanism in dual-phase microstructures, especially regarding the influence of the bainite and martensite-austenite grain size and the martensite-austenite distribution on the strain localization behavior.

What is the role of Bainite in TRIP steels?

the transformation of metastable retained austenite into martensitic or bainitic constituents to control the mechanical properties [1–4]. Conventionally heat-treated TRIP steels, processed by a two-step process, namely intercritical
annealing (IA) and isothermal bainitic transformation (IBT) annealing (the latter also referred to as austempering), have a complex microstructure consisting of a soft, ductile intercritical ferrite matrix with retained austenite (cR), bainite, martensite and fine carbides [5,6]. The product of ultimate tensile strength (UTS) and total elongation (TE) of these alloys can be further improved by controlling

thermal processing and composition, as both factors determine the stability of the metastable cR. It has been proposed that a high stability and sufficient fraction of cR are crucial for achieving a high tensile strength in conjunction with an acceptable ductility [7]. Carbides are considered detrimental in these steels (either transition carbides or cementite) as they can initiate cleavage fracture and void formation. Moreover, carbides act as sinks for C, thus reducing partitioning of C into austenite. To avoid these effects, the addition of Si to TRIP-aided steels is important [4,7]. Si has very low solubility in cementite (Fe3C) and hence kinetically retards precipitation during the bainitic transformation owing to its low mobility compared to that of carbon. Consequently, Si-containing TRIP steels show an increase in austenite stability via C partitioning which results in improved toughness and UTS [4,7]. However, Si also deteriorates the galvanizability of low-C TRIP steels owing to the formation of a very stable Mn2SiO4 oxide film adherent to the steel substrate [8]. As a result, the steels

have poor coatability [9]. To overcome this problem, the addition of Al instead of Si was suggested [9–11]. Al slows down the formation kinetics of cementite and reduces its thermodynamic stability. Hence, substituting Si by Al leads to steels with better coating behavior without sacrificing mechanical properties [10–12]. Furthermore, Al influences the activity and solubility of C in ferrite which leads to
the acceleration of bainite transformation [13,14]. In order to achieve high strength and toughness, nanostructured bainitic steels, which contain a high concentration of C (0.79 wt.%), but do not form carbides, have been designed [15–17]. These steels consist of nanoscale bainitic ferrite (aB) plates and metastable C-enriched cR. They have a strength of 2.5 GPa and a fracture toughness of 30–40 MPa m1/2. Following this concept, recent efforts
addressed modifications of composition and processing with the aim of reducing the C content and the heat-treatment times [18,19]. Bainitic steels containing a low C content of 0.20 wt.% have great potential for lightweight sheet forming and automotive crash applications [18]. To elucidate the redistribution behavior of solute C and the formation of nanosized cementite, atom probe tomography
(APT) was applied [17,19]. It was pointed out that nano-scale carbide precipitation can take place despite a high Al (1.01 wt.%) and Si (1.50 wt.%) concentration. Irrespective of the observation of nanoscaled carbides in these
materials, an atomistic understanding of the alloying effects such as the Si:Al ratio, of partitioning and of the thermal treatment on the bainitic transformation in high-carbon bainitic–austenitic TRIP steels is still lacking. APT is well suited for studying the phase transformation as it provides information on the topology and chemistry in the vicinity of aB/cR interfaces and on the partitioning behavior of elements at near-atomic resolution [17,19–26]. Previous APT studies on TRIP steels suggest that there is no redistribution of substitutional elements, such as Cr, Mn, Al and Si, at the aB/cR interface during bainitic transformation [15–19,25–27]. This observation suggested a displacive mechanism of incomplete bainitic transformation occurring under para-equilibrium (PE) [28,29] or no parti-
tion equilibrium conditions [30]. In general, PE represents a constrained equilibrium, in which C is in local equilibrium and substitutional alloying elements are considered unaffected at the phase boundaries between proeutectoid ferrite
(a) and prior austenite (c) or at the aB/cR interfaces. On the other hand, alternative models have predicted the redistri bution of substitutional elements during proeutectoid ferrite transformation under local-equilibrium, negligible-
partitioning (LENP) conditions [31–36]. Previous publications on quaternary Fe–C–Mn–Si alloys [37,38] have studied the transition from the PE to the LENP regime and the formation of Mn spikes during the growth of proeutectoid ferrite. This phenomenon was interpreted in terms of a reconstructive mechanism using a stationary-interface approximation and also analyzed by scanning
transmission electron microscopy (STEM). Recently, a rough estimate employing area density values of a Mn concentration spike at a a/c interface in a Fe–Mn–C steel was made via STEM analysis [38]. Moreover, theoretical DICTRA calculations and APT analyses have been carried out to better elucidate which type of local equilibrium boundary condition is prevalent at the a/c interface in a low carbon Fe–MnC alloy [39]. However, no atomic-scale understanding has been achieved so far regarding compositional spikes and/or partitioning behavior of alloying elements (especially C, Si and Mn) across the aB/cR interface in high-carbon TRIP steels [13,39–41]. Therefore, a specific challenge for advanced APT analysis lies in determining the type of equilibrium conditions prevailing at the aB/cR interface and identifying the occurrence of possible solute drag effects during bainite formation. More specifically, it is the aim of this study to elucidate
the relationship between the mechanical properties and the nanostructure of steels containing 0.71 wt.% C as a function of the Si:Al ratio, austempering temperature and partitioning effects from an atomic perspective. The steels
studied in this work have a bainitic–austenitic microstructure, and are referred to as super-bainitic TRIP (SB-TRIP) steels. We subject these materials to an experimental multiscale analysis from the micrometer down to the atomic
regime, paying particular attention to the stability of the cR phase and on the redistribution of substitutional elements in the vicinity of aB/cR interfaces during the bainite transformation. We expect that an insight into the atomic nature of the occurring phase transformations and partitioning effects involved gives us a better understanding of the relevant nanostructure–property relationships in these materials.

Therefore, understanding alloying and thermal processing at an atomic scale is essential for the optimal design of high-carbon (0.71 wt.%) bainitic–austenitic transformation-induced plasticity (TRIP) steels. We investigate the influence of the austempering temperature, chemical composition (especially the Si:Al ratio) and partitioning on the nanostructure and mechanical behavior of these steels by atom probe tomography. The effects of the austempering temperature and of Si and Al on the compositional gradients across the phase boundaries between retained austenite and bainitic ferrite are studied. We observe that controlling these parameters (i.e. Si, Al content and austempering temperature) can be used to tune the stability of the retained austenite and hence the mechanical behavior of these steels. We also study the atomic scale redistribution of Mn and Si at the bainitic ferrite/austenite interface. The observations suggest that either para-equilibrium or local equilibrium-negligible partitioning conditions prevail depending on the Si:Al ratio during bainite transformation. 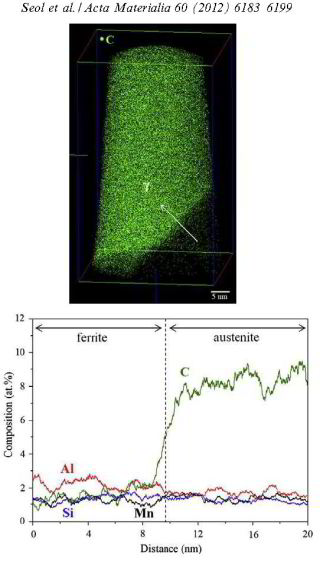 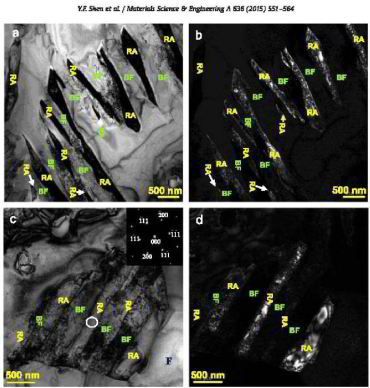 With a suite of multi-modal and multi-scale characterization techniques, the present study unambiguously proves that a substantially-improved combination of ultrahigh strength and good ductility can be achieved by tailoring the volume fraction, morphology, and carbon content of the retained austenite (RA) in a transformation-induced-plasticity (TRIP) steel with the nominal chemical composition of 0.19C–0.30Si–1.76Mn–1.52Al (weight percent, wt%). After intercritical annealing and bainitic holding, a combination of ultimate tensile strength (UTS) of 1100 MPa and true strain of 50% has been obtained, as a result of the ultrafine RA lamellae, which are alternately arranged in the bainitic ferrite around junction regions of ferrite grains. For reference, specimens with a blocky RA, prepared without the bainitic holding, yield a low ductility (35%) and a low UTS (800 MPa). The volume fraction, morphology, and carbon content of RA have been characterized using various techniques, including the magnetic probing, scanning electron microscopy (SEM), electron-backscatter-diffraction (EBSD), and transmission electron microscopy (TEM). Interrupted tensile tests, mapped using EBSD in conjunction with the kernel average misorientation (KAM) analysis, reveal that the lamellar RA is the governing microstructure component responsible for the higher mechanical stability, compared to the blocky one. By coupling these various techniques, we quantitatively demonstrate that in addition to the RA volume fraction, its morphology and carbon content are equally important in optimizing the strength and ductility of TRIP-assisted steels.