Iron- and steelmaking cause ~7% of the global CO2 emissions, due to the use of carbon for the reduction of iron ores. Replacing carbon by hydrogen as the reductant offers a pathway to massively reduce these emissions. However, the production of hydrogen using renewable energy will remain as one of the bottlenecks at least during the next two decades, because making the gigantic annual crude steel production of 1.8 billion tons sustainable requires a minimum stoichiometric amount of ~97 million tons of green hydrogen per year. 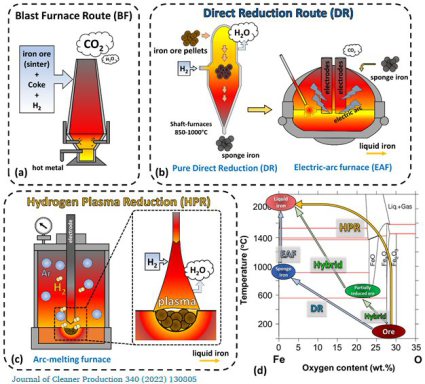 Efficiency in the use of hydrogen for iron ore reduction

Another fundamental aspect to make ironmaking sector more sustainable lies in an optimal utilization of green hydrogen and energy, thus reducing efforts for costly in-process hydrogen recycling. We therefore demonstrate here how the efficiency in hydrogen and energy consumption during iron ore reduction can be dramatically improved by the knowledge-based combination of two technologies: partially reducing the ore at low temperature via solid-state direct reduction (DR) to a kinetically defined degree, and subsequently melting and completely transforming it to iron under a reducing plasma (i.e. via hydrogen plasma reduction, HPR). Results suggest that an optimal transition point between these two technologies occurs where their efficiency in hydrogen utilization is equal. We found that the reduction of hematite through magnetite into wüstite via DR is clean and efficient, but it gets sluggish and inefficient when iron forms at the outermost layers of the iron ore pellets. Conversely, HPR starts violent and unstable with arc delocalization, but proceeds smoothly and efficiently when processing semi-reduced oxides. We performed hybrid reduction experiments by partially reducing hematite pellets via DR at 700°C to 38% global reduction (using a standard thermogravimetry system) and subsequently transferring them to HPR, conducted with a lean gas mixture of Ar-10%H2 in an arc-melting furnace, to achieve fully conversion into liquid iron. This hybrid approach allows to exploit the specific characteristics and kinetically favourable regimes of both technologies, while simultaneously showing the potential to keep the consumption of energy and hydrogen low and improve both, process stability and furnace longevity by limiting its overexposure to plasma radiation.