What is a shear band ? Theory and crystallographic orientation dependence of shear banding

Shear bands, which occur in the form of non-crystallographic bandlike deformation regions of highly concentrated plastic flow, are one of the most frequently observed yet least understood microstructural features in plastically strained ductile metallic materials.

Shear bands are characterized by massive collective dislocation (and/or twinning) activity in a narrow deformation zone (usually of the order of some microns) while the abutting matrix undergoes comparably low and homogeneous plastic flow.

The formation of shear bands is promoted when homogeneous dislocation slip is inhibited or when an insufficient number of crystallographic slip systems is available. In such cases shear banding can act as an alternative and mesoscopically non-crystallographic deformation mode, often associated with a sudden drop in the local flow stress.﻿ As such shear banding is a softening mechanism. 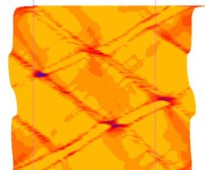 In this project we conducted size-dependent crystal plasticity ﬁnite element simulations of the deformation microstructure, plastic ﬂow and texture evolution in multilayered Cu-Nb composites during cold rolling. The model is based on a constitutive framework incorporating thermally activated dislocation slip, mechanical twinning and non-crystallographic shear banding. It also accounts for the dislocation density evolution and its dependence on initial grain size. By performing a series of quadricrystal simulations considering characteristic heterophase microstructures, the underlying micromechanics and texture of the composites are explored. Signiﬁcant shear banding occurs in both phases, primarily determined by their initial orientations. For each phase, the activation of shear banding is also affected by the mechanical properties and orientations of the adjacent phase. For composites with an initial single layer thickness of 35 um or 4 um, the layer thickness reduction after rolling is non-uniform and the typical
rolling textures for bulk pure metals develop in the respective phases. For the 75 nm initial single layer thickness composite, both phases are reduced uniformly in thickness and the initial orientations prevail. The predictions agree well with experimental observations in cold-rolled Cu-Nb thin ﬁlms. The simulations reveal that for the composites with initial single layer thickness of micrometer scale, dislocation slip is the dominant deformation mechanism although shear banding increasingly carries the deformation at larger strains. For the samples with initial single layer thickness of a few tens of nanometers, shear banding and dislocation slip are the dominant mechanisms. This transition in deformation characteristics leads to different textures in micrometer- and nanometer-scaled multilayers. 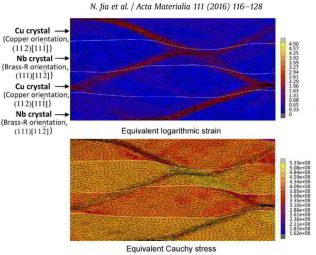 What is the orientation dependence of shear banding in face-centered-cubic single crystals?

Here we present crystal plasticity finite element simulations of plane strain compression of a-Brass single crystals with different initial orientations.
The aim is to study the fundamentals of mesoscale structure and texture development in face-centered-cubic (fcc) metals with low stacking fault energy (SFE). Shear banding depends on the initial orientation of the crystals. In Copper and Brass-R-oriented crystals which show the largest tendency to form shear bands, an inhomogeneous texture distribution induced by shear banding is observed. To also understand the influence of the micromechanical boundary conditions on shear band formation, simulations on Copper-oriented
single crystals with varying sample geometry and loading conditions are performed. We find that shear banding can be understood in terms of a mesoscopic softening mechanism. The predicted local textures and the shear banding patterns agree well with experimental observations in low SFE fcc crystals.

What is the role of shear banding in texture evolution ?

We present crystal plasticity finite element simulations of the texture evolution in alpha-brass polycrystals under plane strain compression. The novelty is a non-crystallographic shear band mechanism [Anand L, Su C. J Mech Phys Solids 2005;53:1362] that is incorporated into the constitutive model in addition to dislocation and twinning. Non-crystallographic deformation associated with shear banding leads to weaker copper and S texture components and to a stronger brass texture compared to simulations enabling slip and twinning only. The lattice rotation rates are reduced when shear banding occurs. This effect leads to a weaker copper component. Also, the initiation of shear banding promotes brass-type components. In summary the occurrence of non-crystallographic deformation through shear bands shifts face-centered-cubic deformation textures from the copper type to the brass type.

The co-deformation and shear localization in heterophase alloys is studied using two-dimensional crystal plasticity finite element simulations on plane strain compressed Cu–Ag and Cu–Nb metal matrix composites. The aim is to study the fundamentals of micromechanics, co-deformation and shear banding in materials with heterophase interfaces. It is observed that, depending on the initial orientations of the crystals, co-deformation of the constituent heterophases often proceeds via collective mechanisms, i.e. by pronounced shear banding triggered by stress concentration at the interfaces. This phenomenon leads to highly localized strains within the bands, exceeding the average strain in part by two orders of magnitude. Shear band development is related to the inherent mechanical properties of each crystal and also to the properties of the abutting crystals. The predicted topology and nature of the cross-phase shear bands, i.e. the extreme local strains, significant bending of the interface regions, and sharp strain localization that propagates across the interfaces, agree well with experimental observations in cold-rolled composites. The simulations reveal that cross-phase shear banding leads to large and highly localized values of stress and strain at heterophase interfaces. Such information is essential for a better understanding of the micromechanical boundary conditions inside co-deformed composites and the associated shear-induced chemical mixing.

Silicon steel is a soft magnetic material that is used in electrical power transformers, motors and generators. It has a high silicon content of about 3.2 mass%, which increases the electrical resistivity of iron and, therefore, reduces eddy current losses. Grain-oriented silicon steel that is used for non-rotating applications, i.e. transformers, is characterised by a strong preferred crystallographic orientation. In iron the easiest directions of magnetisation are the 001 crystal directions. In grain-oriented silicon steel the Goss orientation, i.e. the {110}001 orientation, is technologically realised to minimise magnetic losses in electrical transformers. The strong Goss texture of grain-oriented silicon steel is the result of a complex processing scheme, i.e. of a long microstructural and textural inheritance chain. The origin of the evolution of the final Goss orientation is in the hot rolling stage, where the Goss orientation develops below the sheet surface due to shear deformation. The particular importance of this Goss-containing subsurface layer was demonstrated by experiments in which the removal of this layer resulted in incomplete secondary recrystallisation. In the cold rolled material, the fraction of the Goss orientation, considering a misorientation of up to 15°, is about 1% as measured using electron backscatter diffraction (EBSD). This means that the Goss component is too weak to be detected by X-ray diffraction, as used in earlier studies. In the subsequent primary annealing step, the material recrystallises and the Goss component slightly increases. In the final secondary high-temperature annealing process, normal grain growth is inhibited by particles. However, some of the Goss grains that are present in the recrystallised material grow abnormally. This gives rise to a sharp Goss texture with an average misorientation from the exact Goss orientation of about 3–7°. The exact mechanisms of inheritance of the Goss orientation through the process chain and details of abnormal Goss grain growth in the secondary annealing stage are still unclear.
Here a FeSi single crystal with an initial {1 1 0}〈0 0 1〉 orientation, also referred to as Goss orientation, was cold rolled up to a thickness reduction of 89%. Most of the crystal volume rotated into the two symmetrical {1 1 1}〈1 1 2〉 orientations. However, a weak Goss component remained in the highly strained material, even though the Goss orientation is mechanically unstable under plane strain loading. Two types of Goss-oriented regions were discernable in the material subjected to 89% reduction. It appeared that these two types of Goss regions have different origins. Goss grains that were found aligned in shear bands form during straining. A second type of Goss region was found between microbands where the initial Goss orientation was retained.

We studied the texture and microstructure evolution in a plane strain compressed Cu–Ag metal matrix composite (MMC) with a heterophase
microstructure using crystal plasticity finite element simulations. Lattice reorientations induced by both crystallographic (dislocation
slip and twinning) and non-crystallographic (shear banding) mechanisms are addressed. First, simulations on a polycrystalline composite are made. Quite similar texture trends are observed for the composites and for the individual single-phase materials, namely, copper-type texture components in the Cu phase and brass-type texture components in the Ag phase. This result differs from experimental data that show less copper-type and more brass-type textures in both phases for the composite materials. To explore co-deformation
mechanisms that lead to the specific crystallographic textures in the MMC, bicrystal simulations for the composite with specific initial orientation combinations are performed. The bicrystal simulations reproduce the experimentally observed trends of texture evolution in the respective phases of the composite, indicating that the localized stress and strain fields as well as the co-deformation mechanisms within the actual heterophase microstructure are well captured. The modeling shows that to accommodate plastic deformation between adjacent phases in the bicrystals, pronounced shear bands are triggered by stress concentration at the hetero-interfaces. With further deformation the bands penetrate through the phase boundaries and lead to larger lattice rotations. The simulations confirm that the shear banding behavior in heterophase composites is different from that in single-phase metals and the texture evolution in composite materials is strongly influenced by the starting texture, the local constraints exerted from the phase boundaries and the constitutive properties of the abutting phases. 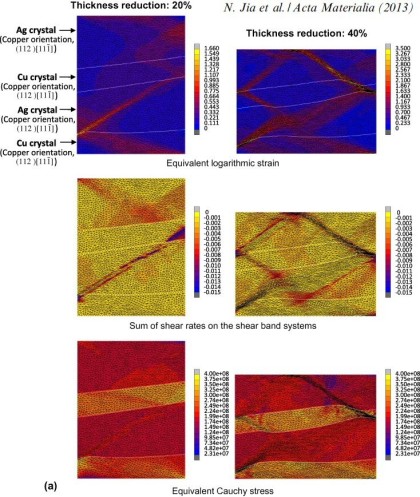 Shear bands are mesoscopic band-like deformation inhomogeneities in middle and heavily deformed metallic alloys.  They appear under oblique angles relative to the main deformation axis and can penetrate multiple crystals in the deformation structure.  They are characterized by a mesoscopic orientation that does not match a distinct crystallographic direction, for instance that of a specific slip or twinning system. Therefore, they are also referred to as non-crystallographic deformation zones.  In cold-rolled materials they typically form under an angle of approximately 35°-40° relative to the rolling direction.
Shear bands are found in many materials. Very frequently they appear in materials with a low stacking fault energy.  However they also observed in metallic alloys with high stacking fault energy such as for instance in several aluminum alloys, for instance when these materials contain shearable particles or a high solute content of copper or magnesium.
The underlying micro and nanostructures of such shear bands typically consist of very small dislocation cells and contain very high dislocation densities.  Shear bands often penetrate multiple grains and carry very high local shears.  At the transition zones between the shear band interior and the surrounding matrix material often very strong lattice curvature and very high densities of geometrically necessary dislocations are found.  These two properties, namely, the high driving forces and the high local misorientations at the rims of the shear bands are essential prerequisites for nucleation and subsequent growth of new grains. Consequently such inhomogeneous deformation zones are highly potential sites for nucleation of recrystallization.﻿

An EBSD Investigation on Deformation-Induced Shear Bands In Ti-Bearing IF-Steel Under Controlled Shock-Loading Conditions
We report the results of the microstructural characterization of a Ti-bearing IF-steel
deformed at high strain rates (» 6.104 s-1) in a split Hopkinson bar. The shock-loading tests were performed in
Fe-IF-shockload.pdf
PDF-Dokument [2.3 MB] 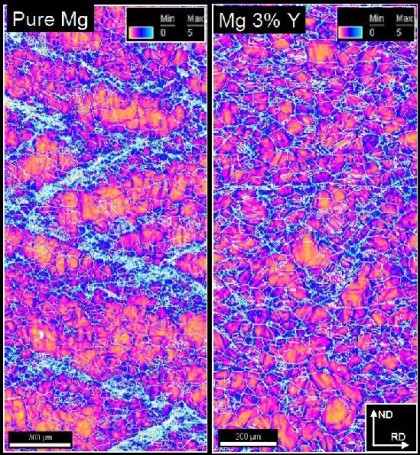 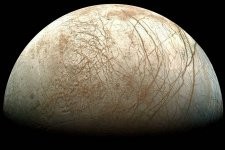 Shear bands on the surface of Jupiter moon Europa 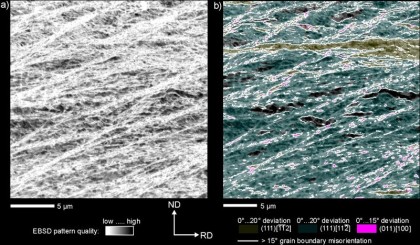 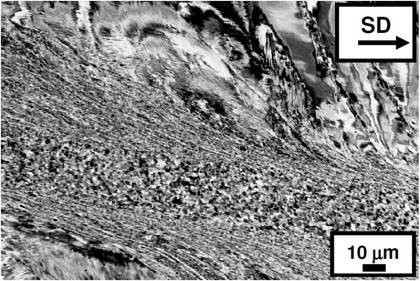 Adiabatic shear band in IF steel. 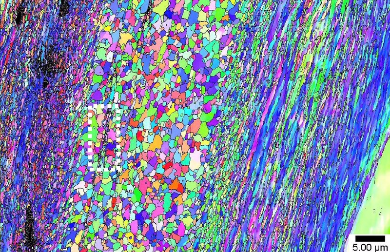 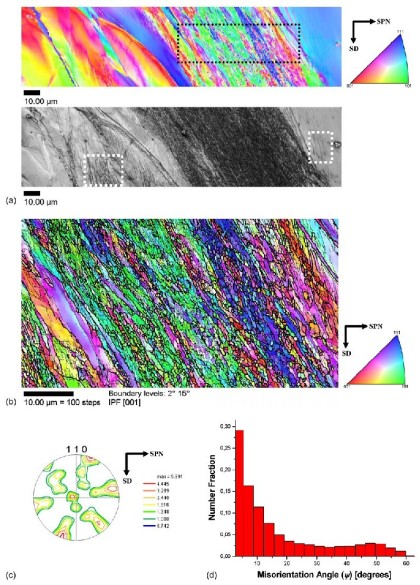