Cobalt and its Alloys

(At temperatures below 417°C cobalt exhibits a hexagonal close-packed structure. Between 417°C and its melting point of 1493°C, cobalt has a face-centered cubic structure.)
Density at 293 K: 8.9 g/cm3

The thermal expansion coefficient lies between those of iron and nickel.

The tomb of Pharaoh Tutankhamen, who ruled from 1361-1352 BC, contained a small glass object coloured deep blue with cobalt. Cobalt blue was known even earlier in China and was used for pottery glazes.

In 1730, chemist Georg Brandt of Stockholm became interested in a dark blue ore from some local copper workings and he eventually proved that it contained a hitherto unrecognised metal and he gave it the name by which its ore was cursed by miners in Germany, where it was sometimes mistaken for a silver ore. He published his results in 1739. For many years his claim to have uncovered a new metal was disputed by other chemists who said his new element was really a compound of iron and arsenic, but eventually it was recognised as an element in its own right.

As a group, the cobalt-base alloys may be generally described as wear resistant, corrosion resistant, and heat resistant (strong even at high temperatures).

As a group, the cobalt-base alloys may be generally described as wear resistant, corrosion resistant, and heat resistant (strong even at high temperatures). Many of the properties of the alloys arise from the crystallographic nature of cobalt (in particular its response to stress), the solid-solution-strengthening effects of chromium, tungsten, and molybdenum, the formation of metal carbides, and the corrosion resistance imparted by chromium. Generally the softer and tougher compositions are used for high-temperature applications such as gas-turbine vanes and buckets. The harder grades are used for resistance to wear.

The cobalt-base wear alloys of today are little changed from the early alloys of Elwood Haynes. The most important differences relate to the control of carbon and silicon (which were imparities in the early alloys). Indeed, the main differences in the current Stellite alloy grades are carbon and tungsten contents (hence the amount and type of carbide formation in the microstructure during solidification). Carbon content influences hardness, ductility, and resistance to abrasive wear. Tungsten also plays an important role in these properties.

Types of wear. There are several distinct types of wear which generally fall into three main categories:

Sliding Wear. Of the three major types of wear, sliding is perhaps the most complex, not in concept, but in the way different materials respond to sliding conditions. Sliding wear is a possibility whenever two surfaces are forced together and moved relative to one another. The chances of damage are increased markedly if the two surfaces are metallic in nature, and if there is little or no lubrication present.

Today, the use of high-temperature alloys is more diversified, as more efficiency is sought from the burning of fossil fuels and waste, and as new chemical processing techniques are developed.

Although the cobalt-base wear-resistant alloys possess some resistance to aqueous corrosion, they are limited by grain boundary carbide precipitation, the lack of vital alloying elements in the matrix (after formation of the carbides or Laves precipitates) and, in the case of the cast and weld overlay materials, by chemical segregation in the microstructure.

By virtue of their homogeneous microstructures and lower carbon contents, the wrought cobalt-base high-temperature alloys (which typically contain tungsten rather than molybdenum) are even more resistant to aqueous corrosion, but still fall well short of the nickel-chromium-molybdenum alloys in corrosion performance.

To satisfy the industrial need for alloys which exhibit outstanding resistance to aqueous corrosion, yet share the attributes of cobalt as an alloy base (resistance to various forms of wear, and high strength over a wide range of temperatures), several low-carbon, wrought cobalt-nickel-chromium-molybdenum alloys are produced.

A novel type of CoeTieCr-base gamma / gamma' superalloys with low mass density
A gamma strengthened Co-Ti-Cr superalloy is presented with a mass density 14 % below that of typical Co - Al - W-based alloys. The lattice misfit is sufficiently low to form coherent cuboidal gamma' precipitates. Atom probe tomography shows that Cr partitions to the g phase, but increases the gamma' volume fraction compared
to a binary Co-Ti alloy to more than 60 %. The solubility of Cr in the gamma' phase is significantly higher than expected from previously published values. The gamma' solvus temperature is above 1100°C. The yield strength shows a distinct increase above 600°C surpassing that of Co-9Al-8W (at.%) and conventional Co-base superalloys, even more so when it is normalized by the mass density.
Acta Materialia 135 (2017) 244 Novel Co [...]
PDF-Dokument [1.6 MB]

Elemental partitioning and hardness in Ti- and Ta-containing Co-base superalloys, strengthened by gamma'-Co3(Al, W) precipitates, have
been studied by local measurements. Using atom probe tomography, we detect strong partitioning of W (partitioning coefficients from 2.4 to 3.4) and only slight partitioning of Al (partitioning coefficients 61.1) to the gamma'-Co3(Al, W) phase. Al segregates to the gamma/gamma' phase boundaries, whereas W is depleted at the gamma side of the boundaries after aging at 900°C and slow air cooling. This kind of Al segregation and W depletion is much less pronounced when water quenching is applied. As a result, these effects are considered to be absent at high temperatures and therefore should not influence the creep properties. Ti and Ta additions are found to strongly partition to the gamma' phase and greatly increase the gamma' volume fraction. Our results indicate that the alloying elements Al, W, Ti and Ta all occupy the B sublattice of the A3B structure (L12 type) and affect the partitioning behavior of each other. Nanoindentation measurements show that Ta also increases the hardness of the gamma' phase, while the hardness of the gamma channels remains nearly constant in all alloys. The change in hardness of the gamma' phase can be ascribed to the substitution of Al and W atoms by Ti and/or Ta.

An efficient way to study the relationship between chemical composition and mechanical properties of thin films is to utilize the combinatorial approach, where spatially resolved mechanical property measurements are conducted along a concentration gradient. However, for thin film glasses many properties
including the mechanical response are affected by chemical topology. Here a novel method is introduced which enables spatially resolved short range order analysis along concentration gradients of combinatorially synthesized metallic glass thin films. For this purpose a CoZrTaB metallic glass film of 3 um
thickness is deposited on a polyimide foil, which is investigated by high energy X-ray diffraction in transmission mode. Through the correlative chemistry-topology-stiffness investigation, we observe that an increase in metalloid concentration from 26.4 to 32.7 at% and the associated formation of localized
(hybridized) metal e metalloid bonds induce a 10% increase in stiffness. Concomitantly, along the same composition gradient, a metalloid-concentration-induced increase in first order metal - metal bond distances of 1% is observed, which infers itinerant (metallic) bond weakening. Hence, the metalloid
concentration induced increase in hybridized bonding dominates the corresponding weakening of metallic bonds. 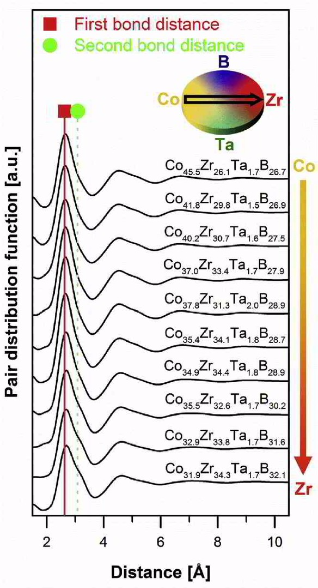 Pair distribution functions with increasing Co content from bottom to top obtained by high energy X-ray diffraction are presented in a range from 1.5 to 10.5 Å. The data at the bottom were obtained for the highest Zr content.

The high entropy alloy (HEA) concept has triggered a renewed interest in alloy design, even though some aspects of the underlying thermodynamic concepts are still under debate. This study addresses the shortcomings of this alloy design strategy with the aim to open up new directions of HEA research targeting
specifically non-equiatomic yet massively alloyed compositions. We propose that a wide range of massive single phase solid solutions could be designed by including non-equiatomic variants. It is demonstrated by introducing a set of novel non-equiatomic multi-component CoCrFeMnNi alloys produced by
metallurgical rapid alloy prototyping. Despite the reduced configurational entropy, detailed characterization of these materials reveals a strong resemblance to the well-studied equiatomic single phase HEA: The microstructure of these novel alloys exhibits a random distribution of alloying elements (confirmed by Energy-Dispersive Spectroscopy and Atom Probe Tomography) in a single face-centered-cubic phase (confirmed by X-ray Diffraction and Electron Backscatter Diffraction), which deforms through planar slip (confirmed by Electron-Channeling Contrast Imaging) and leads to excellent ductility (confirmed by
uniaxial tensile tests). This approach widens the field of HEAs to non-equiatomic multi-component alloys since the concept enables to tailor the stacking fault energy and associated transformation phenomena which act as main mechanisms to design useful strain hardening behavior. 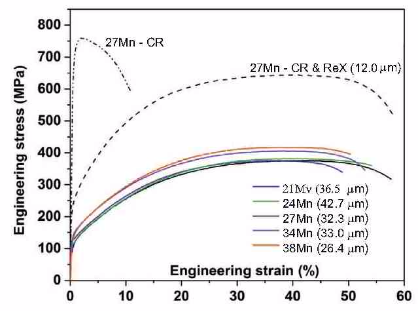 Stress–strain curves of all the alloys in their respective homogenized states, representative 27 Mn alloy both in cold rolled (64%) and recrystallized (900°C, 10 min) states for comparison.

A non-equiatomic FeMnNiCoCr alloy is introduced and characterized at multiple scales employing various characterization techniques (e.g. atom probe tomography, electron channeling contrast imaging, electron backscatter diffraction, etc.) to elucidate (i) the role of configurational entropy and (ii) the intrinsic tensile ductility of high-entropy alloys. Results reveal that the new material is a true high-entropy alloy with a stable random solid solution despite its comparably low configurational entropy, and that it has excellent tensile ductility irrespective of the substantial lattice distortion. 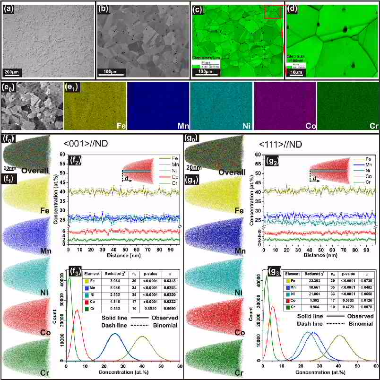 We investigate the thermodynamic properties of the prototype equi-atomic high entropy alloy (HEA) CoCrFeMnNi by using finite-temperature ab initio methods. All relevant free energy contributions are considered for the hcp, fcc, and bcc structures, including electronic, vibrational, and magnetic excitations. We predict the paramagnetic fcc phase to be most stable above room temperature in agreement with experiment. The corresponding thermal expansion and bulk modulus agree likewise well with experimental measurements. A careful analysis of the underlying entropy contributions allows us to identify that the originally postulated dominance of the configurational entropy is questionable. We show that vibrational, electronic, and magnetic entropy contributions must be considered on an equal footing to reliably predict phase stabilities in HEA systems.

The objective of this study is to experimentally and theoretically investigate the phase stability of non-equiatomic FexMn62ÿxNi30Co6Cr2 based high entropy alloys, where x ranges from 22 to 42 at.%. Another aim is to systematically and critically assess the predictive capability of the CALPHAD approach for such high entropy alloy systems. We find that the CALPHAD simulations provide a very consistent assessment of phase stability yielding good agreement with experimental observations. These include the equilibrium phase formation at high temperatures, the constituent phases after non-equilibrium solidification processes, unfavorable segregation profiles inherited from solidification together with the associated nucleation and growth of low temperature phases, and undesired martensitic transformation effects. Encouraged by these consistent theoretical and experimental results, we extend our simulations to other alloy systems with equiatomic compositions reported in the literature. Using these other equiatomic model systems we demonstrate how systematic CALPHAD simulations can improve and accelerate the design of multicomponent alloy systems.

The proposal of configurational entropy maximization to produce massive
solid-solution (SS)-strengthened, single-phase high-entropy alloy (HEA) systems
has gained much scientific interest. Although most of this interest
focuses on the basic role of configurational entropy in SS formability, setting
future research directions also requires the overall property benefits of massive
SS strengthening to be carefully investigated. To this end, taking the
most promising CoCrFeMnNi HEA system as the starting point, we investigate
SS formability, deformation mechanisms, and the achievable mechanical
property ranges of different compositions and microstructural states. A comparative assessment of the results with respect to room temperature behavior of binary Fe-Mn alloys reveals only limited benefits of massive SS formation. Nevertheless, the results also clarify that the compositional requirements in this alloy system to stabilize the face-centered cubic (fcc) SS are sufficiently relaxed to allow considering nonequiatomic compositions and exploring improved strength–ductility combinations at reduced alloying costs.