In this project we devcloped sample transfer instrumentation and integrated protocols for the preparation and atom probe characterization of environmentally-sensitive materials. Ultra-high vacuum cryogenic suitcases allow specimen transfer between preparation, processing and several imaging platforms without exposure to atmospheric contamination. For expedient transfers, we installed a fast-docking station equipped with a cryogenic pump upon three systems; two atom probes, a scanning electron microscope / Xe-plasma focused ion beam and a N2-atmosphere glovebox. We also installed a plasma FIB with a solid-state cooling stage to reduce beam damage and contamination, through reducing chemical activity and with the cryogenic components as passive cryogenic traps. We demonstrate the efficacy of the new
laboratory protocols by the successful preparation and transfer of two highly contamination and temperature-sensitive samples—water and ice. Analysing pure magnesium atom probe data, we can show that surface oxidation can be effectively suppressed using an entirely cryogenic protocol (during specimen preparation and during transfer). Starting with the cryogenically-cooled plasma FIB, we also prepared and transferred frozen ice samples while avoiding significant melting or sublimation, suggesting that we may be able to measure the nanostructure of other normally-liquid or soft materials. Isolated cryogenic protocols within the N2 glove box demonstrate the absence of ice condensation suggesting that environmental control can commence from fabrication until atom probe analysis.

Can we observed hydrogen and deuterium at atomic scale in high-strength steel?

Observing solute hydrogen (H) in matter is a challenge, yet, quantitative imaging of H at the atomic-scale is critical to understand its inﬂuence on the mechanical strength of metallic alloys that results in catastrophic failures of engineering parts and structures through hydrogen embrittlement.

To study these phenomena we conducted APT analysis of hydrogen (H) and deuterium (D) within the nanostructure of an ultra-high strength steel with high resistance to hydrogen embrittlement. Cold drawn, severely deformed pearlitic steel wires contains cementite decomposed during the pre-deformation of the alloy and ferrite. We ﬁnd H and D within the decomposed cementite, and at some interfaces with the surrounding ferrite. To ascertain the origin of the H/D signal obtained in APT, we explored a series of experimental workﬂows including cryogenic specimen preparation and cryogenic-vacuum transfer from the preparation into a state-of-the-art atom probe. Our study points to the critical role
of the preparation, i.e. the possible saturation of H-trapping sites during electrochemical polishing, how these can be alleviated by the use of an outgassing treatment, cryogenic preparation and transfer prior to charging.
Accommodation of large amounts of H in the under-stoichiometric carbide likely explains the resistance of pearlite against hydrogen embrittlement.

Why is observing hydrogen in alloys important?

H is the lightest and smallest of atoms. It is also ubiquitous. Its pres-
ence within the structure of metals cannot be avoided, partly due to its
high mobility. The interactions between H and metals play an essential
role in the structure-property relationships of engineering alloys.
Hydrogen’s most striking effect on materials is a sudden and often
unpredictable decrease in ductility, toughness, and generally in the
material’s resistance to fatigue-crack propagation known as hydrogen
embrittlement. This phenomenon was discovered as early as 1875 by
Johnson but is still not fully understood to date. A real-life example:
the oil spillage in the Gulf of Mexico in 2012 is attributed to the cata-
strophic failure of connector bolts due to hydrogen embrittlement.
Hydrogen embrittlement mostly affects structural, high-strength

materials that ﬁnd application in the e.g. automotive, aeronautical, oil
and gas and power generation industries. 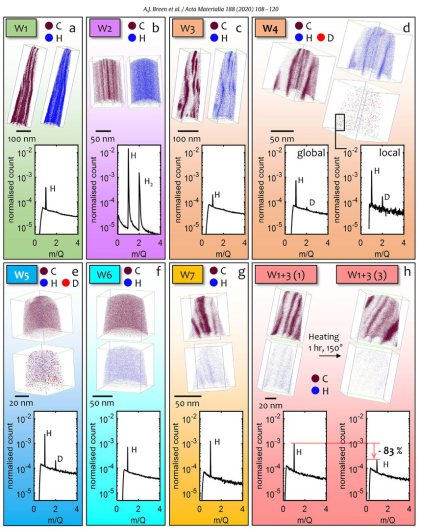 Acta Materialia 188 (2020) 108: APT results obtained from the deformed pearlitic wire after the different experimental workﬂows. (a) (g) correspond to the results from workﬂows W1 W7, respectively. (h) represents the results from the same specimen after 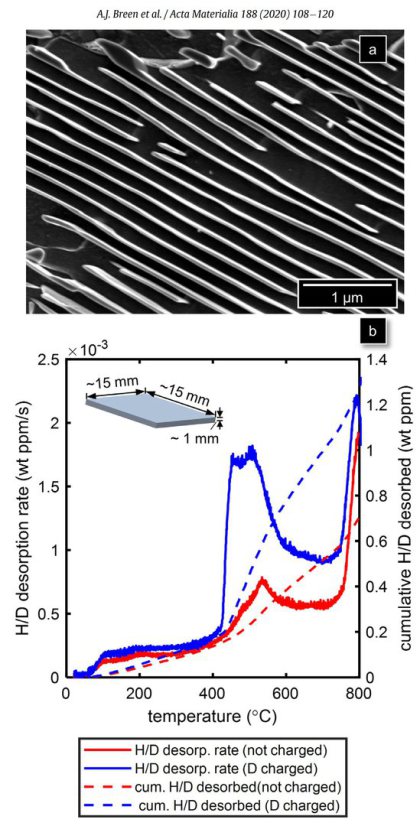 (a) A SEM image of the ﬁne pearlite microstructure of the cast Fe-0.743C sample. (b) The TDS curve showing signiﬁcantly higher D detection after charging, with the desorption rate on the left axis and the cumulative amount of H/D on the right axis (Acta M 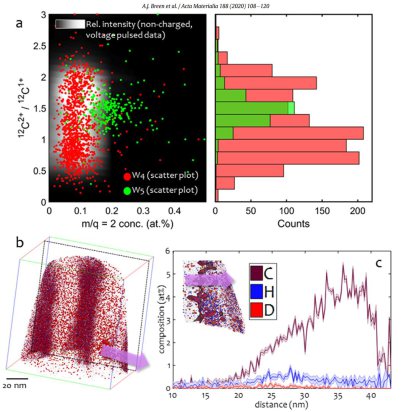