Conducting atomic scale chemical and structural analysis on steels is particularly exciting and also important for revealing basic structure-property relationships that are governed by the interplay between structural defects and their specific chemical decoration.  These effects have been considered since long, such as the famous Cottrell cloud, the Portevin-Chatellier mechanism or the Suzuki effect, yet, it has been up to now very difficult or even impossible to directly observe such mechanisms.  The use of atom probe tomography in conjunction with structure-resolving electron microscopy and atom probe crystallography allows us nowadays to reveal both, the mechanical and the structural features of such phenomena.  Better understanding the interplay of local chemical composition and the thermodynamics and kinetics of lattice defects puts us in a position for deriving composition-sensitive microscopic and mean-field structure-property-processing relationships even for complex metallurgical alloys.  Steel is a particularly interesting material to conduct such studies owing to its multiple interstitial and substitutional alloying elements, its complex lattice defect substructure and the various equilibrium and non-equilibrium phase transformations that occur in them.

What are the strengthening and strain hardening mechanisms in a precipitation- hardened high-Mn lightweight steel?

For answering this question we studied the strengthening and strain hardening mechanisms in an aged high-Mn lightweight steel (Fe-30.4Mn-8Al-1.2C, wt.%) by electron channeling contrast imaging (ECCI), transmission electron microscopy (TEM), atom probe tomography (APT) and correlative TEM/APT. Upon isothermal annealing at 600 !C, nano-sized kappa-carbides form, as characterized by TEM and APT. The alloy exhibits high strength and excellent ductility accompanied by a high constant strain hardening rate.
In comparison to the as-quenched kappa-carbide free state, the precipitation of kappa-carbides leads to a significant increase in yield strength (~480 MPa) without sacrificing much tensile elongation. To study the strengthening and strain hardening behavior of the precipitation-hardened material, deformation microstructures were analyzed at different strain levels. TEM and correlative TEM/APT results show that the kappa-carbides are primarily sheared by lattice dislocations, gliding on the typical face-centered-cubic (fcc) slip system {111}<110>, leading to particle dissolution and solute segregation. Ordering strengthening is the predominant strengthening mechanism. As the deformation substructure is characterized by planar slip bands, we quantitatively studied the evolution of the slip band spacing during straining to understand the strain hardening behavior. A good agreement between the calculated flow stresses and the experimental data suggests that dynamic slip band refinement is the main strain hardening mechanism.
The influence of kappa-carbides on mechanical properties is discussed by comparing the results with that of the same alloy in the as-quenched, kappa-free state. 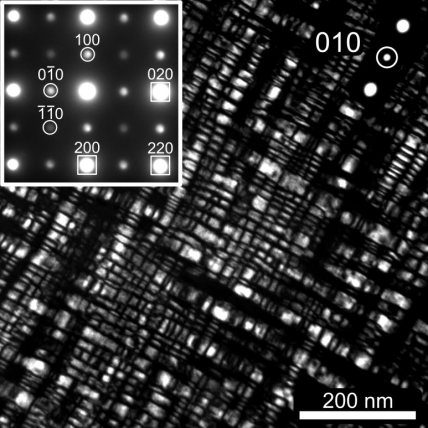 DF-TEM image of the precipitates using the (010) superlattice spot (highlighted by circle). After isothermal annealing at 600 !C for 24 h well organized nano-sized k- carbides are observed in the undeformed material. 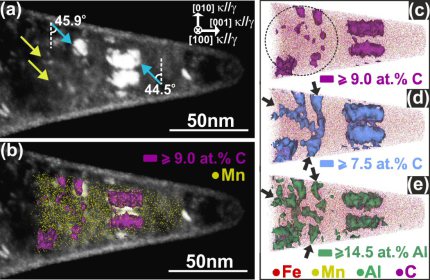 Correlative TEM/APT analysis of a deformed microstructure at a true strain of 0.15: (a) DF-TEM micrograph along [001] zone axis with the blue arrows highlighting the shearing of kappa-carbides and yellow ones indicating the fragments of kappa-carbides

How can core-shell nanoparticle arrays double the strength of ferritic steels?

Manipulating structure, defects and composition of a material at the atomic scale for enhancing its physical or mechanical properties is referred to as nanostructuring. Here, by combining advanced microscopy techniques, we show how formation of highly regular nano-arrays of nanoparticles doubles the strength of an Fe-based alloy, doped with Ti, Mo, and V, from 500 MPa to 1 GPa, upon prolonged heat treatment. The nanoparticles form at moving heterophase interfaces during cooling from the high-temperature face-centered cubic austenite to the body-centered cubic ferrite phase. We observe MoC and TiC nanoparticles at early precipitation stages as well as core-shell nanoparticles with a Ti-C rich core and a Mo-V rich shell at later precipitation stages. The core-shell structure hampers particle coarsening, enhancing the material’s strength. Designing such highly organized metallic core-shell nanoparticle arrays provides a new pathway for developing a wide range of stable nano-architectured engineering metallic alloys with drastically enhanced properties. 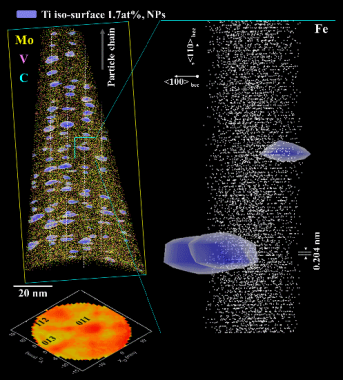 Do Maraging Steel have Different Micro- and Nanostructures when Produced Conventionally and by Laser Additive Manufacturing?

Maraging steels are used to produce tools by Additive Manufacturing (AM) methods such as Laser Metal Deposition (LMD) and Selective Laser Melting (SLM). Although it is well established that dense parts can be produced by AM, the influence of the AM process on the microstructure - in particular the content of retained and reversed austenite as well as the nanostructure, especially the precipitate density and chemistry, are not yet explored. In this specific project, we study these features using microhardness measurements, Optical Microscopy, Electron Backscatter Diffraction (EBSD), Energy Dispersive Spectroscopy (EDS), and Atom Probe Tomography (APT) in the as-produced state and during ageing heat treatment. We find that due to microsegregation, retained austenite exists in the as-LMD- and as-SLM-produced states but not in the conventionally-produced material. The hardness in the as-LMD-produced state is higher than in the conventionally and SLM-produced materials, however, not in the uppermost layers. By APT, it is confirmed that this is due to early stages of precipitation induced by the cyclic re-heating upon further deposition—i.e., the intrinsic
heat treatment associated with LMD. In the peak-aged state, which is reached after a similar time in all materials, the hardness of SLM- and LMD-produced material is slightly lower than in conventionally-produced material due to the presence of retained austenite and reversed austenite formed during ageing. 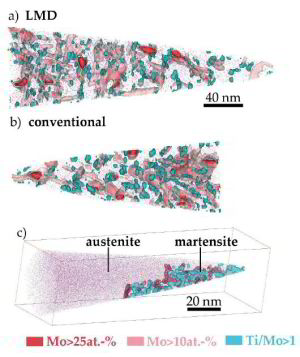 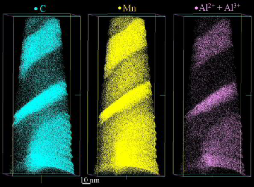 In this project we found direct atomic-scale evidence for the precipitation of non-stoichiometric kappa-carbides, (Fe,Mn)3(Fe,Al)Cx containing Al, in a ferritic-matrix-based high-Al weight reduced steel isothermally annealed at either 500 or 600°C. With increasing isothermal holding temperature: (i) the kinetics for gamma decomposition increases; (ii) the width of kappa-phase increases; (iii) the Mn content inside the kappa-carbide decreases; and (iv) the enrichment factors for solutes decrease. We observed that fine lamellae consisting of a2 and gamma-phase are formed by a eutectoid decomposition of the gamma phase, where the kinetics is controlled by the undercooling. Using TEM and APT, we also elucidated the solute partitioning at the atomic-scale and thus obtained insights into the transformation mechanism of the kappa-phase in the ferritic steel  matrix. Al atoms partitioned into the austenite at high temperatures as well as the diffusion of C are significant factors for needle-like formation of kappa-carbides.

In this project we investigated a novel confined chemical and structural phase state which is referred to as linear complexion state.

For this purpose we used high-purity cold-rolled martensitic Fe-9wt%Mn alloy. Tensile tests performed at room temperature after tempering for 6 h at 450°C showed discontinuous yielding. Such static strain ageing phenomena in Fe are usually associated with the segregation of interstitial elements such as C or N to

dislocations. Here we show by correlative transmission electron microscopy (TEM)/atom probe tomography (APT) experiments that in this case Mn segregation to edge dislocations associated with the formation of confined austenitic states causes similar effects. The local chemical composition at the
dislocation cores was investigated for different tempering temperatures by APT relative to the adjacent bcc matrix. In all cases the Mn partitioning to the dislocation core regions matches to the one between ferrite and austenite in thermodynamic equilibrium at the corresponding tempering temperature.
Although a stable structural and chemical confined austenitic state has formed at the dislocation cores these regions do not grow further even upon prolonged tempering. Simulation reveals that the high Mn enrichment along the edge dislocation lines (25 at.%Mn at 450°C) cannot be described merely as a
Cottrell atmosphere formed by segregation driven by size interaction. Thermodynamic calculations based on a multiscale model indicate that these austenite states at the dislocation cores are subcritical and defect-stabilized by the compression stress field of the edge dislocations. Phenomenologically, these
states are the 1D equivalent to the so-called complexions which have been extensively reported to be present at 2D defects, hence have been named linear complexions. 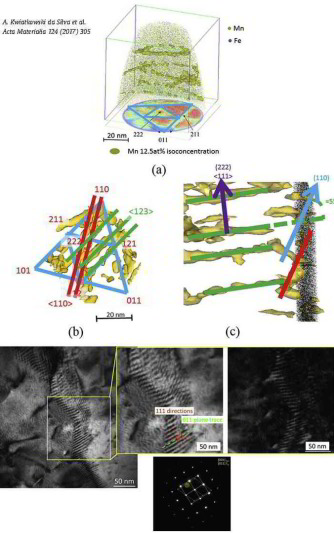 In this propject a precipitation hardened maraging TRIP steel was analyzed using a pulsed laser atom probe. The laser pulse energy was varied from 0.3 to 1.9 nJ to study its effect on the measured chemical compositions and spatial resolution. The compositions of the nano-precipitates were not affected by
changes in the laser pulse energy, whereas the evaporation field
and charge state ratios showed a strong dependence on the laser
pulse energy. 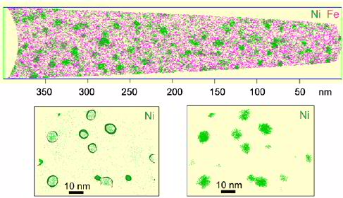 In this project we studied methodological aspects of the atom probe tomography characterization of heavily cold drawn pearlitic steel wire. Pearlitic wires exhibit tensile strengths up to 7 GPa after severe plastic deformation. Such heavy wire deformation promotes refinement of the ferrite-cementite lamellar structure and gradual cementite decomposition. In our work, a Local Electrode Atom Probe 3000 (LEAP) was used to characterize the microstructural evolution of pearlitic steel. 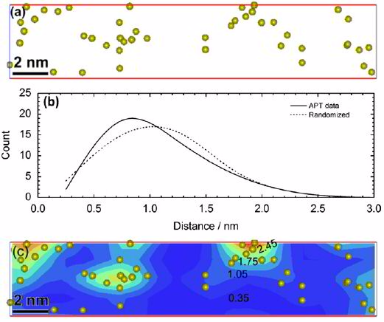 Can we design Heusler phase nanoprecipitates in steels?

In this project we managed to design B2 NiMn and Ni2MnAl Heusler phase nanoprecipitates via elastic misfit stabilization in Fe–Mn maraging steels. The Heusler phases were studied in detail by combining transmission electron microscopy (TEM) correlated atom probe tomography (APT) with ab initio simulations. Guided by these predictions, the Al content of the alloys is systematically varied, and the influence of the Al concentration on structure stability, size and distribution of precipitates formed during ageing at 450 C is studied using scanning electron microscopy–electron backscatter diffraction,
TEM and APT. Specifically, the Ni2MnAl Heusler nanoprecipitates exhibit the finest sizes and highest dispersion and hence lead to significant strengthening. The formation of the different types of precipitates and their structure, size, dispersion and effect on the mechanical properties of the alloys are discussed.

The hierachical nanostructure of martensite as observed by atom probe tomography

To improve our understanding of the multi-scale characteristics of martensitic microstructures and their micromechanical properties, a multi-probe methodology has been developed and applied to low-carbon lath martensitic model alloys. The approach is based on the joint employment of electron channeling contrast imaging (ECCI), electron backscatter diffraction (EBSD), transmission electron microscopy (TEM), atom probe tomography (APT) and nanoindentation, in conjunction with high precision and large field-of-view 3D serial sectioning. This methodology enabled us to resolve (i) size variations of martensite sub-units, and their relation to (ii) dislocation sub-structures and (iii) chemical heterogeneities therein, and (iv) the associated local mechanical properties. The identified interrelated microstructure heterogeneity is discussed and related to the martensitic transformation sequence, which is proposed to intrinsically lead to formation of a nano-composite structure in low-carbon martensitic steels.

3D structural and atomic-scale analysis of lath martensite: Effect of the transformation sequence
Acta Materialia 95 (2015) 366-377
This report aims at providing an improved fundamental understanding on the micro-mechanical response of lath martensitic microstructures. Lath martensite is of immense importance for structural alloys, since it is among the major strength-providing microstructural constituents in martensitic or multi-phase steels (e.g. dual phase steel, transformation-induced plasticity steel, complex phase steels, quench-partition steels, etc.). Despite its long history and use, efforts to better understand the microstructure development and the mechanical behavior of lath martensite are
still ongoing.
Acta Materialia 95 (2015) 366 Martensite[...]
PDF-Dokument [1.7 MB]