Shark teeth have a range of macroscopic geometries which are evolutionarily optimized for their respective specific biological predator function, i.e.
the way of hunting and biting. The teeth can be classified by their geometry, e.g. as ‘tearing-type’, ‘cutting-type’ or ‘cutting-clutching type’. The chemical and crystallographic composition of shark teeth of such different shape and function are still very similar. Morphologically, the teeth of sharks consist mainly of dentin that is covered by an outer hard and highly mineralized layer in the crown area. In reptiles and mammals, including humans, this outermost layer of the teeth is denoted as enamel.
In sharks, the external tooth layer has no ectodermal enamel and is, therefore, denoted as ‘enameloid’. The enamel of mammalian teeth, including human teeth, consists of hydroxyapatite (Ca5(PO4)3OH), associated with small amounts (ca. 1 wt.%) of an organic matrix composed mainly of the proteins amelogenin and enamelin.
The mineral phase of shark tooth enameloid consists of fluoroapatite (Ca5(PO4)3F), with a fluoride content nearly as high as that of geological fluoroapatite crystals (3.1 and 3.64 wt.%, respectively). The total enameloid contains ca. 5–8 wt.% of organic matrix consisting of collagens and enamelins.

In mammalian and human tooth enamel, the hydroxyapatite forms needle-like crystallites organized in bundles which are referred to as enamel prisms, that originate at the dentin–enamel junction and are oriented perpendicular to the tooth surface. The outermost layer (‘prismless layer’) of human enamel consists of parallel oriented needle-like crystallites. The fluoroapatite in shark tooth enameloid is also present in the form of elongated crystallites that constitute layers with different structural organization. These layers have been classified by the structural analysis of surface etched sectional samples. Three layers of the enameloid were identified and denoted as ‘shiny-layered enameloid (SLE)’, ‘parallel-bundled enameloid (PBE)’ and ‘tangled-bundled enameloid (TBE)’. Since the PBE and TBE show a gradual transition, the enameloid of sharks is generally thought to be organized into two main structural building blocks: a superficial layer (shiny layer) and an inner layer consisting of crystallite bundles with changing degrees of structural organization from distal to proximal.

From exterior to interior, the well-organized crystallite bundles of the PBE change to a less ordered TBE. Reaching the dentin– enameloid junction, no defined bundles are visible in the TBE, but randomly arranged crystallites. 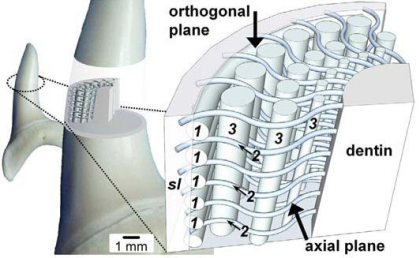 Teeth represent the hardest tissue in most living vertebrates. Their main function is catching prey and mastication of food. Therefore, they have a unique and delicate ultrastructure, typically with highly mineralized enamel on the outside and soer bone-like dentin inside representing the endodontium.
Bony fish, amphibians, reptiles and mammals (including humans), use calcium phosphate as tooth mineral.The tooth mineral in vertebrates is hydroxyapatite with some carbonate substitutions on phosphate positions, the so-called dahllite. An exception are cartilaginous sh including sharks which use
fluoroapatite as tooth mineral.We have shown recently that shark teeth contain uoroapatite only in the outer layer, i.e. the enameloid (the enamel-equivalent in sharks, more appropriately called durodentin), but not in dentin. This enameloid is derived from cells of the tooth papilla and is different from
true enamel of epithelial origin in bony fish and upper vertebrates. Here we report on a comprehensive study of the teeth of extinct sharks, sauropterygians, mosasaurs and dinosaurs where their ultrastructure and chemical composition were analyzed with high-end chemical and microscopic methods (elemental analysis, scanning electron microscopy, X-ray powder diffraction including Rietveld refinement, infrared spectroscopy).

More specific teeth represent the hardest tissue in vertebrates and appear very early in their evolution as an ancestral character of the Eugnathostomata (true jawed vertebrates). In recent vertebrates, two strategies to form and mineralize the outermost functional layer have persisted. In cartilaginous fish, the enameloid is of ectomesenchymal origin with fluoroapatite as the mineral phase. All other groups form enamel of ectodermal origin using hydroxyapatite as the mineral phase. The high abundance of teeth in the fossil record is ideal to compare structure and composition of teeth from extinct groups with those of their recent successors to elucidate possible evolutionary changes. Here, we studied the chemical omposition and the microstructure of the teeth of six extinct shark species, two species of extinct marine reptiles and two dinosaur species using high-resolution chemical and microscopic methods. Although many of the ultrastructural features of fossilized teeth are similar to recent ones (especially for sharks where the ultrastructure basically did not change over millions of years), we found surprising differences in chemical composition. The tooth mineral of all extinct sharks was fluoroapatite in both dentin and enameloid, in sharp contrast to recent sharks where fluoroapatite is only found in enameloid. Unlike extinct sharks, recent sharks use hydroxyapatite as mineral in dentin. Most notably and hitherto unknown, all dinosaur and extinct marine reptile teeth contained fluoroapatite as mineral in dentin and

enamel. Our results indicate a drastic change in the tooth mineralization strategy especially for terrestrial vertebrates that must have set in after the cretaceous period. Possibly, this is related to hitherto unconsidered environmental changes that caused unfavourable conditions for the use of fluoroapatite as tooth mineral. 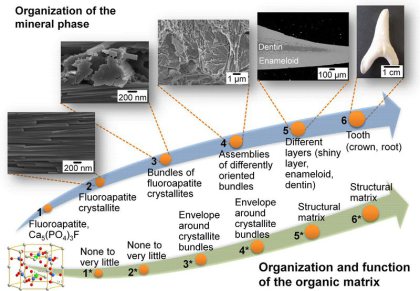