High manganese austenitic steels with 15-30 wt% Mn are attractive for structural applications in the automotive industry because of their outstanding mechanical properties such as high strength and high ductility.
Under applied loading, the hardening mechanism in this class of steels is due to Transformation Induced Plasticity (TRIP) and/or Twinning Induced Plasticity (TWIP).

Austenitic steel systems which exhibit TRIP or TWIP are, for instance, Fe-Mn-C or Fe-Mn-Al-Si. Related alloys where both phenomena can occur concurrently are Fe-Cr-Ni stainless steels which are used in the fields of energy conversion, household and cryogenic applications as well as chemical industries. Depending on the chemical composition and the deformation temperature, additional plastic deformation mechanisms such as mechanical twinning and/or athermal phase transformation phenomena can occur besides dislocation slip in such steels.

How do TRIP and TWIP depend on the stacking fault energy?

How does the stacking fault energy influence the microstructure and the strain-hardening evolution of TWIP / TRIP steels?

Understanding the relationship between the stacking-fault energy (SFE), the different types of deformation mechanisms and teh resulting strain-hardening behavior is important for tuning the alloying and teh microstructure-design of high-Mn austenitic transformation-and twinning-induced plasticity (TRIP/TWIP) steels. In a consortium project we studied the inﬂuence of the SFE on the microstructural and strain-hardening evolution of three TRIP/TWIP alloys (Fe–22/25/28Mn–3Al–3Si wt.%). The SFE was increased by systemically increasing the Mn content from 22 to 28 wt.%. The Fe–22Mn–3Al–3Si alloy, with a SFE of 15 mJ/m^2, deforms by planar dislocation glide and strain-induced ehcp-/abcc-martensite formation which occurs from the onset of plastic deformation, resulting in improved work-hardening at low strains but lower total elongation. With an increased SFE of 21 mJ / m^2 in the Fe–25Mn–3Al–3Si alloy, both mechanical twinning and ehcp-martensite formation are activated during deformation, and result in the largest elongation of the three alloys. A SFE of
39 mJ m 2 enables signiﬁcant dislocation cross slip and suppresses ehcp-martensite formation, causing reduced work-hardening during the early stages of deformation in the Fe–28Mn–3Al–3Si alloy while mechanical twinning begins to enhance the strain-hardening after approximately 10% strain. The
increase in SFE from 15 to 39 mJ/m^2 results in signiﬁcant changes in the deformation mechanisms and, at low strains, decreased work-hardening, but has a relatively small inﬂuence on strength and ductility. 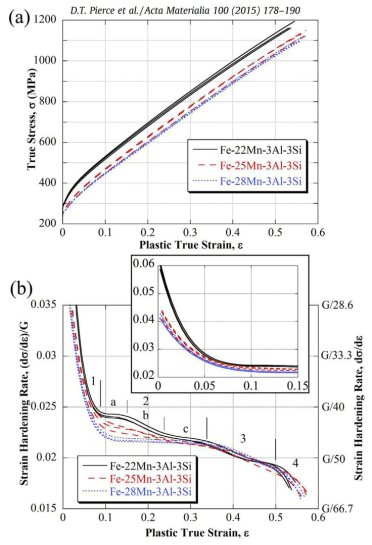 (a) True stress and (b) strain-hardening rate vs. plastic true strain for the Fe– 22/25/28Mn–3Al–3Si steels (3 tests for each composition). The strain-hardening stages are labeled 1–4 at their approximate locations and all curves terminate at maximum unif

How can competing TWIP and TRIP effects be modelled?

The objective of this project is to develop a physically-based crystal plasticity model for high Mn steels that can capture the activation of different plastic deformation mechanisms, in particular the TRIP and TWIP effects, and their interaction with dislocation plasticity and their respective dependence on the substructure, based on the SFE of the material. The model is implemented within an existing crystal plasticity computational framework, the Düsseldorf Advanced Material Simulation Kit (DAMASK).

A crystal plasticity model for twinning- and transformation-induced plasticity
Acta Materialia 118 (2016) 140-151
In this paper a dislocation density-based crystal plasticity model incorporating both transformation-induced plasticity (TRIP) and twinning-induced plasticity (TWIP) is presented. The approach is a physically-based model which reflects microstructure investigations of ε-martensite, twins and dislocation structures in high manganese steels. Validation of the model was conducted using experimental data for a TRIP/TWIP Fe-22Mn-0.6C steel. The model is able to predict, based on the difference in the stacking fault energies, the activation of TRIP and/or TWIP deformation mechanisms at different temperatures.
crystal plasticity twinning and TRIP Act[...]
PDF-Dokument [1.5 MB]

What are the effects of strain rate on the mechanical properties and deformation behavior of an austenitic Fe-25Mn-3Al-3Si TWIP-TRIP steel ?

In one project the effects of quasi-static and low-dynamic strain rate (ε̇= 10−4 /s to ε̇= 102 /s) on tensile properties and deformation mechanisms were studied in a Fe-25Mn-3Al-3Si (wt%) twinning and transformation-induced plasticity [TWIP-TRIP] steel. The fully austenitic microstructure deforms primarily by dislocation glide but due to the room temperature stacking fault energy [SFE] of 21±3 mJ/m2 for this alloy, secondary deformation mechanisms such as mechanical twinning (TWIP) and epsilon martensite formation (TRIP) also play an important role in the deformation behavior. The mechanical twins and epsilon-martensite platelets act as planar obstacles to subsequent dislocation motion on non-coplanar glide planes and reduce the dislocation mean free path. A high-speed thermal camera was used to measure the increase in specimen temperature as a function of strain, which enabled the use of a thermodynamic model to predict the increase in SFE. The influence of strain rate and strain on microstructural parameters such as the thickness and spacing of mechanical twins and epsilon-martensite laths was quantified using dark field transmission electron microscopy, electron channeling contrast imaging, and electron backscattered diffraction. The effect of sheet thickness on mechanical properties was also investigated. Increasing the tensile specimen thickness increased the product of ultimate tensile strength and total elongation, but had no significant effect on uniform elongation or yield strength. The yield strength exhibited
a significant increase with increasing strain rate, indicating that dislocation glide becomes more difficult with increasing strain rate due to thermally-activated short-range barriers. A modest increase in ultimate tensile strength and minimal decrease in uniform elongation were noted at higher strain rates, suggesting adiabatic heating, slight changes in strain-hardening rate and observed strain localizations as root causes, rather than a significant change in the underlying TWIP-TRIP mechanisms at low values of strain.

Can TRIP and TWIP effects also be stimulated in High Entropy Alloys?

Yes, particularly the reduction of the stacking fault energy for instance through the use of Interstitial atoms enable joint twinning and transformation induced plasticity in strong and ductile high-entropy alloys.

High-entropy alloys (HEAs) consisting of multiple principle elements provide an avenue for realizing exceptional mechanical, physical and chemical properties. In our work we found a novel strategy for designing a new class of HEAs incorporating the additional interstitial element carbon. This results in joint
activation of twinning- and transformation-induced plasticity (TWIP and TRIP) by tuning the matrix phase’s instability in a metastable TRIP-assisted dual-phase HEA.

Which other deformation mechanisms occur in metastable interstitial High Entropy Alloys with TRIP and TWIP effects?

Besides activation of the TWIP and TRIP mechanisms such alloys benefit also from massive substitutional and interstitial solid solution strengthening as well as from the composite effect associated with its dual-phase structure. Nanosize particle formation and grain size reduction are also utilized. The new interstitial TWIP-TRIP-HEA thus unifies all metallic strengthening mechanisms in one material, leading to twice the tensile strength compared to a single-phase HEA with similar composition, yet, at identical ductility.