Which large options exist to decarburize the steel industry?

Several pathways for the decarbonization of the blobal steel industry are conceivable, considering the total market demand of about 1.9 billion tons per year:

1) Increase in the efficiency of all current production steps along the entire value chain.

2) Use of hydrogen and sustainable energy sources along the entire value chain. Electrification of processing steps.

3) Use of recycled steel. However, the market demand strongly exceeds the scrap availability. Also, undesired impurities such as copper, which accumulate over time, mean that new steel will always be needed for sectors that require high-quality steel such as cars.

4) Currently, carbon capture and storage (CCS) is likely to play a role in decarbonizing the steel sector. CCS can be used directly at a steel plant or in the production of hydrogen. This should not be a long terms solution as the underground CO2 can leak into the environment.

5) Use of Hydrogen and its carriers to decarbonize the reduction of oxides.

Also, Hydrogen can be used as the only or combined reducing agent in a process known as direct reduction of iron or DRI (H2-DRI). Futher options are hydrogen plasma reduction and electrolytic reduction methods. 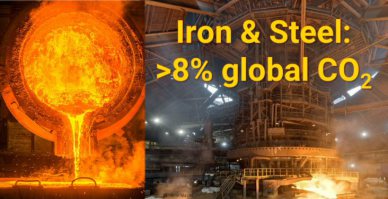 What is the role of blast furnaces and converters on global warming?

The iron and steel route through blast furnaces and converters, also known as the primary production route, accounts for about 70% of global steel production. The majority of the associated greenhouse gas emissions (mainly CO2) come from the blast furnaces, the coke plants and the oxygen converters. The coke plant produces coking coal, which is used in the blast furnace both as a heat source and to reduce iron. H2-BF has the potential to reduce emissions both in the coke plant and blast furnace because it reduces the amount of coal needed and only forms water after reacting with iron ore instead of carbon dioxide. Today, the most common auxiliary reducing agents are pulverized coal (PC), oil, natural gas, or a combination of these, all of which produce CO2.

Steel is the most important material class in terms of volume and environmental impact. While it is a sustainability enabler, for instance through lightweight design, magnetic devices, and efficient turbines, its primary production is not. Iron is reduced from ores by carbon, causing 30% of the global CO2 emissions in manufacturing, qualifying it as the largest single industrial greenhouse gas emission source. Hydrogen is thus attractive as alternative reductant. Although this reaction has been studied for decades, its kinetics is not well understood, particularly during the wüstite reduction step which is much slower than hematite reduction. Some rate-limiting factors of this reaction are determined by the microstructure and local chemistry of the ores. Here, we report on a multi-scale structure and composition analysis of iron reduced from hematite with pure H2, reaching down to near-atomic scale. During reduction a complex pore- and microstructure evolves, due to oxygen loss and non-volume conserving phase transformations. The microstructure after reduction is an aggregate of nearly pure iron crystals, containing inherited and acquired pores and cracks. We observe several types of lattice defects that accelerate mass transport as well as several chemical impurities (Na, Mg, Ti, V) within the Fe in the form of oxide islands that were not reduced. With this study, we aim to open the perspective in the field of carbon-neutral iron production from macroscopic processing towards better understanding of the underlying microscopic transport and reduction mechanisms and kinetics.

Role of steels for sustainability

Steel is by far the most important metallic material, both in terms of quantity and the breadth of industrial applications, ranging from transportation, infrastructure, construction, machinery to safety. It is also an enabler of clean energy conversion technologies, such as wind or solar thermal. Steel can be recycled practically infinitely by collecting and re-melting scraps. When averaged over all steel grades and scrap types its global recycling rate is about 70%, making steel the world's most recycled material, and, in absolute tonnage, amounting to more than all other recycled materials combined.  However, due to steel’s global role as a backbone material of economic development and its high and steady growth rates, scrap-based secondary synthesis alone cannot satisfy the global demand. Also, a major challenge in using large amounts of scrap to produce high grade steel lies in the gradual accumulation of undesired tramp elements such as copper. Therefore, fresh iron from ore reduction will always be needed in addition to scrap recycling. For these reasons, huge quantities of iron are produced each year by conventional primary synthesis, via reduction of iron ores in blast furnaces, using carbon as a reductant. The current annual consumption of iron ores for this process amounts to a gigantic 2.6 billion tons, producing about 1.28 billion tons of pig iron through this route. Each ton of steel produced by this conventional primary synthesis, i.e. through a blast furnace followed by a basic oxygen converter, creates about 2.1 tons of CO2. Currently, more than 70% of the global iron production is made through this process route.
These numbers make steel one of the most staggering single sources of greenhouse gas on the planet, with about 6.5% of all CO2 emissions, i.e. 30% of all CO2 emissions from the manufacturing sector. Global growth rate projections suggest a massive further increase of these emissions at least up to the year 2050 if no technology changes are implemented.
However, unreflected CO2 sequestration may also produce negative impacts. For instance, the currently developed approach of underground CO2 storage for long-term periods (i.e. virtually hundreds or thousands of years) is a technique that might cause harmful effects on soil and water due to leakage.

Three main strategies are explored to mitigate the dramatic contribution of primary iron synthesis and steel making to GHG emissions and global warming.
The first one is an increase in recycling. However, secondary production of steel still causes between 0.3 and 0.6 ton CO2 per ton of recycled steel, due to the use of graphite electrodes in the electric arc furnaces, injected fuels and the electrical power which is mostly generated from fossil fuels. Also, there is simply not enough scrap available (globally only about 1/3rd of the total production comes from such secondary resources) to cover the total demand, due to the longevity of many steel products, for instance, in buildings, machines and vehicles. More than 3/4 of all steel products that were ever made are still in use today. Some steel constructions and buildings have been lasting for 150 years, for instance the Brooklyn Bridge.

The second scenario is the use of electrolysis, similar to the primary production of aluminium via the Hall-Heróult process. However, the iron oxide’s high melting point and the chemically aggressive nature of the high-temperature liquid salts make this processing route currently less attractive for commercial production. Promising in this field, however, is the recent progress in low-temperature electrolysis, using ionic liquids as solvents.
The third, and currently most viable alternative, lies in the use of hydrogen as a reducing agent (instead of carbon), provided it comes from sustainable sources. Hydrogen-based reduction schemes need to consider three thermodynamic constraints in the design of reactors. (1) The net energy balance for the complete reduction of iron oxide to iron with hydrogen is endothermic, i.e. it requires external energy to proceed, whereas it is exothermic with carbon monoxide.  (2) In many of the current transition techniques for the reduction of iron ores, hydrogen is not used as the only reductant, but it can be mixed with several types of carbon carriers in the same reactor. This means that the catalytic splitting of the injected molecular dihydrogen into reactive atomic hydrogen (H2↔2H) and its reaction with the oxide competes with other reduction reactions. Also, the reaction product, i.e. water, must be removed from the reaction zone as it can re-oxidize or block the reduction front. This is a challenging detail as water or, respectively, the oxygen that is removed from the oxide, desorbs and diffuses only slowly compared with the atomic reductants. High partial pressure of water has indeed been shown to act detrimental to the nucleation and growth of iron on wüstite surfaces. (3) The availability of green hydrogen (made from sustainable sources) is currently by far too small to mitigate the steel industry’s greenhouse gas output. This means that the reduction via grey hydrogen has to serve as transition technology with a reduced mitigation effect. Grey hydrogen, which makes currently more than 95% of the global hydrogen market, comes from steam reforming and partial oxidation of methane, coal gasification and wet coke gas production. Hydrogen won from reforming contains CO as a contaminant, an effect which must be considered in the carbon balance of downstream reactions. A more sustainable alternative to producing large amounts of hydrogen for iron ore reduction might come from methane pyrolysis, where solid carbon is the byproduct.

Motivation for direct reduction of iron oxides by hydrogen

The hydrogen-based reduction scenario with the currently highest technology-readiness level is to inject hydrogen into existing blast furnaces, in addition to coke. The coke lends the furnace its permeable structure. This structure is needed to allow gas percolation as well as slag and metal outflux. Current pilot operations use either grey hydrogen (from gas reforming) or coke gas. The latter is a mixture containing up to 65% hydrogen and more than 20% methane, available in integrated steel factories from the coke plant.
Yet, the underlying microscopic processes and some aspects associated with the basic thermodynamics and kinetics within the blast furnace are not well understood and can thus not be controlled or tuned for higher reduction efficiency and improved CO2 balance. A possible consequence of this is that the injected hydrogen partially evades without contributing much to the reduction reaction and thus without markedly reducing CO2 emissions, even though hydrogen diffuses and percolates much faster than CO and CO2. Another efficiency limit is that the reaction is endothermic, hence, more carbon-carriers are required to keep the temperature high enough when increasing the hydrogen amount injected.
The second technology option is the direct reduction of solid iron ore pellets by hydrogen at temperatures above 570 °C. In this case, the reduction proceeds from hematite (Fe2O3) to magnetite (Fe3O4), and further to wüstite (FeO) and metallic iron (Fe).
Several macroscopic studies exist on the reduction of iron oxide exposed to different gas mixtures (in part including hydrogen) in the temperature range of 500-900 °C. However, key aspects that influence the reduction kinetics in terms of the microstructure, nano-chemistry, porosity, interface fracture, and mechanics of the ores and partially reduced products have not been studied. These less-known parameters and mechanisms have in common that they act on micro- and even near-atomic length scales, with substantial influence on transport and reaction kinetics. Thus, the next level of insight into the carbon-free reduction of iron ores requires direct observations at these small scales, probing both, structure and chemistry. Better understanding of these processes would enable the design of suited ore pellets and process conditions with respect to ore preparation, pre-processing, enrichment strategies, microstructure, dispersion, porosity, grain size, texture, thermo-mechanical conditions, and chemical composition regarding the pellets, as well as reduction gas mixtures and reactor design.