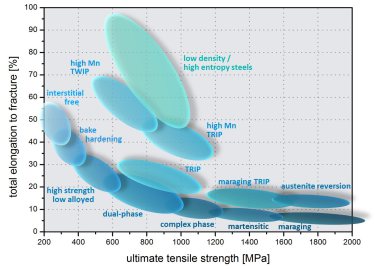 Overview of the mechanical properties of High and Medium Entropy Alloys and Medium and High Entropy Steels.

What is the role of interstitial elements in High Entropy Steels ?

A point that has received little attention in high entropy alloys is the use of interstitial elements. Here, we address the role of C in face centered cubic solid solution phases. High entropy steels reveal excellent mechanical properties, namely, very high ductility and toughness; excellent high rate and low temperature ductility; high strength up to 1 GPa; up to 17% reduced mass density; and very high strain hardening.  The microstructure stability can be tuned by adjusting the stacking fault energy. This enables to exploit deformation effects such as the TRIP, TWIP or precipitation determined mechanisms. 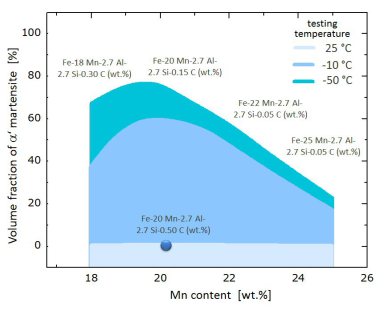 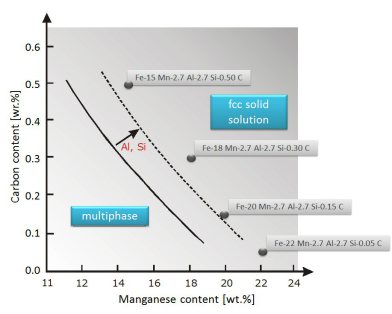 Why can we and why should we deviate from equiatomic compositions in High Entropy Alloys ?

A second design idea, deviating from the classical multi-component concept, lies in using relatively lean and non-equiatomically portioned compositions.  This is due to the fact that in many transition metal alloy solid solutions the shape of the configurational entropy as a function of chemical composition assumes a relatively flat and compositionally wide plateau. This means that the entropy curve has a weak maximum and no steep changes, except for the case of very small concentrations.
This fact suggests that entropy-based stabilization of massive solid solutions can also be achieved for non-equiatomic quinary and quaternary alloy compositions.
This modifies the original high entropy alloying concept, where none of the alloying elements was meant to dominate, into a class of Fe-based materials which we consequently refer here to as high entropy steels.
Beyond the argument associated with the flat entropy curve there are other good reasons for designing compositionally simplified high entropy alloys:
An obvious motive lies in reducing alloying costs.  Any material that is being designed and meant to be used for specific applications must pass the critical test whether the respective alloying elements and their quantities are indeed required to reach a design target or not.  If not, their respective alloying content can be reduced.  Examples are typical bounds known for established commercial alloys such as a certain Cr and Mo content in stainless steels for achieving sufficient pitting and corrosion resistance; specific values of Ni and Al in superalloys required to arrive at the characteristic matrix – precipitate structure; a certain Cu content for precipitating Guinier-Preston zones in age hardening aluminum alloys; or a minimum required Nb or Ta content to stabilize elastically compliant bcc Ti alloys.
In all these metallurgical examples the respective alloying elements are only added to the content that is required for achieving the aims described, but the alloying content is not increased beyond these values if not serving a specific thermodynamic, kinetic or property function.  However, in cases where a near-maximum value of the configurational entropy can be realized at smaller alloying content, i.e. before reaching an equiatomic composition, no need exists to alloy further. In other words the presence of a long and flat compositional entropy plateau enables to exploit a wider mixing range and less consumption of expensive alloying ingredients when designing high entropy alloys.
Another issue in realizing homogeneous massive crystalline solid solutions is not the maximization of the entropy but rather the avoidance of intermetallic phases.  When aiming at stabilizing a single phase compositionally complex material it is from a thermodynamic standpoint more plausible to analyze the likelihood of intermetallic compounds in the multicomponent phase diagram rather than only analyzing the configurational entropy.
It was recently observed that the entropy-maximized 25% equiatomic quaternary FeMnCoCr alloy (being close to the well-known Cantor alloy) surprisingly leads to a complex multiphase microstructure containing several intermetallic phases while the non-equiatomic material Fe40Mn10Co10Cr produces a homogeneous fcc single phase. This shows that a high entropy contribution to the stabilization of the matrix alone is often not sufficient to over-compensate enthalpy advantages of competing intermetallic phases. This might be also the reason why truly single phase high entropy phases have been realized only for a few compositions so far. Introducing a non-equiatomic mixing rule would provide a much larger compositional space for synthesizing high entropy alloys without intermetallic phases.
A third set of advantages associated with lean multi-component compositions is a practical one, such as reducing variations in vapor pressure typically occurring in multi-component systems, less segregation and improved casting properties.
Another aspect that should be realized is that XRD, EBSD and atom probe tomography analysis increasingly reveals that many of the high entropy alloys that have been studied so far are actually not single phase materials but often contain intermetallic phases. A well investigated exception from this is the multi-component yet single phase fcc Cantor alloy FeMnNiCoCr.
The occurrence of one or often more intermetallic phases, sometimes with nanoscopic size or at grain boundaries, is not only a thermodynamic or kinetic issue. The presence of intermetallic phases typically deteriorates mechanical key properties such as ductility, fatigue resistance and toughness. Alloys containing intermetallic phases, therefore, often reveal inferior properties compared to corresponding single-phase alloys of similar, yet non- equiatomic composition.
An additional point supporting non-equiatomic multi-component alloys in the form of high entropy steels is to better exploit fcc phase stabilization and strain hardening effects associated with interstitial elements, specifically C which has been well studied in the context of TWIP steel systems.
In the light of these considerations we study different multi-component high entropy steels that make use of increased configurational entropy for stabilizing a single-phase homogeneous massive solid solution fcc matrix. The focus is placed on the quinary system Fe-Mn-Al-Si-C but also some trends in the quaternary system Fe-Mn-Al-C are presented. Some of the alloys discussed contain as little as 50 at.% Fe. High entropy steels based on the quinary Fe-Mn-Al-Si-C system overlap for the case of a maximized Al content in part with the recently introduced class of low density steels.  In these alloys the size and high stability of the fcc phase field created by Fe, Mn, and C prevails even when adding a high amount of soluble Al. 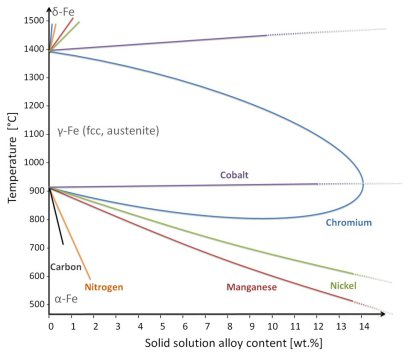 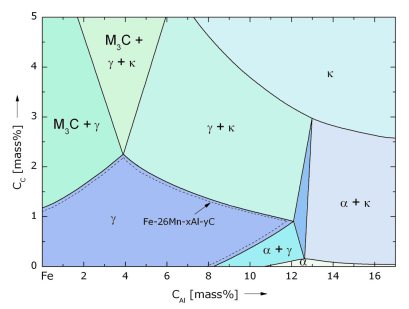 The valence electron rule for realizing stable fcc solid solutions was in the high entropy alloy literature suggested as VEC ≥ 8.
When calculating the VEC for the fcc high entropy steels presented here, including also compositions presented in earlier publications, we find typical values for the VEC of 8-9. The VEC numbers for the individual elemental are 3 for Al, 8 for Fe, 7 for Mn, 4 for Si, 4 for C and 5 for N.
It is interesting to note that we find smaller VEC numbers (typically 7-8) for our current non-equiatomic Fe-Mn based high entropy steels when considering only the substitutional elements Fe, Mn, Al and Si and neglecting the VEC contribution provided by the interstitial elements.  When also considering the additional electrons donated by interstitials, for instance by the very high C content, the alloys reach VECs above 8. This means that the VEC criterion suggests that fcc solid solution high entropy steels can be designed when using interstitial elements. This pathway opens a further alloy design option for high entropy alloys.
Another important aspect in that context is to define the fcc phase stability that is actually targeted.  From the experience with highly alloyed fcc steels it is well known that typically not the stable fcc matrix but rather a slightly instable fcc matrix provides beneficial strain hardening properties. More specific, when aiming at fcc solid solutions where coupled deformation-transformation effects such as TRIP and TWIP are to be exploited as mechanisms for equipping these alloys with additional strain hardening capacity, the target is actually not to achieve a thermodynamically stable but rather an instable matrix. This enables deformation-induced confined phase transformations such as martensite or twinning. This has been recently also demonstrated for the case of high entropy alloys.
This means that, when translating this idea back into the VEC guideline, it might be a design criterion to target a VEC value of just 8 but not much higher.
One has to consider though that the current high entropy alloy literature suggests that the VEC criterion alone is an insufficient design criterion. Instead, reliable phase predictions require full thermodynamic calculations whenever possible.