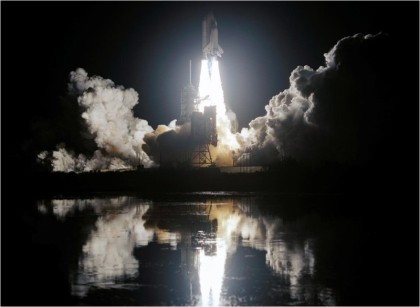 Some notes on the history of metallurgy (sorry, only in German, need to translate it some day)
Dierk Raabe - Geschichte der Metalle.pdf
PDF-Dokument [1'017.3 KB]

In 1821 French Geologist Pierre Berthier discovered reddish clay rock deposits in France. The rock was named bauxite after Les Baux, the area where it was found

Pure elemental aluminum was not discovered until the early 1800's when Humphrey Davy established its existence, yet, he was unable to actually synthesize any.

About 10 years later a French scientist discovered hard, red clay containing over 50% aluminum oxide in southern France. It was named bauxite, aluminum's most common ore.
In 1825 a small lump of aluminum metal was synthesized by Hans Christian Oersted of Denmark, whose work was continued and developed by Friedrich Wöhler in Berlin who managed to isolate 30 grams of aluminium powder in October 22, 1827, in a process involving potassium and anhydrous aluminum chloride. It then took him another 18 years of continuous experimentation to create small spheres of solidified molten aluminium (globules) in 1845. With this progress Wöhler was able to establish the mass density of aluminum, and discovered its lightness also in 1845.

Nine years later, another outstanding French scientist, Henri Sainte-Claire Deville, became involved with aluminum, and improved upon Wöhler's method to create the first commercial production process. With that he was able to produce the first industrial aluminium together with his partners at Charles and Alexandre Tissier's production facility in Rouen in northern France in 1856.

At that time aluminum was more expensive than gold and platinum, and it was regarded as the newest precious metal. A bar of aluminum was even exhibited at the Paris world Exhibition in 1855.

But over the next ten years its value fell by over 90% although it was still far too expensive to be adopted by industry as the metal of choice. Gradually methods were improved upon and in 1885 a process was developed with an annual output of 15 tonnes.

The real revolution occurred a year later with the remarkable, separate but simultaneous development of an aluminum isolation method. Paul Louis Toussaint Héroult of France and Charles Martin Hall of the USA both came up with a process of dissolving aluminum oxide in molten cryolite to lower the melting point and hence reduce the energy required and passing through a large electrical current. When this was achieved pure aluminum collected at the bottom. The process was named after both scientists and we still use the Hall Héroult synthesis method today.

The process gave excellent results, but required an enormous amount of electric power.

Héroult solved this problem by harnessing the power of the Rhein Waterfalls in Neuhausen (Switzerland) where the force of the falling water bought the smelters dynamos into operation.
The Swiss Metallurgical Society and Rathenau, a German industrialist, signed an agreement establishing the Aluminium Industry Joint Stock Company with the total value of CHF 10 million in Neuhausen on November 18, 1888. Later it was renamed to the Aluminium Smelter Society and its logo depicted the sun rising from beyond an aluminium ingot. Rathenau's idea was that it should symbolise the dawn of the aluminium industry. Following the Aluminium Smelter Society's creation aluminium production efficiency increased more than 10 times in five years. Just 40 tonnes of aluminium were melted in 1890 in Neuhausen compared with 450 tonnes in 1895.

Former student Charles Hall, with the support of his friends, established the Pittsburgh Reduction Company which launched its first smelter in Kensington outside Pittsburgh on September18, 1888. It produced only 20-25 kg of aluminium per day in the first few months, but quickly accelerated to 240 kg daily by 1890.

The Pittsburgh Reduction Company built new smelters in New York State near the new Niagara hydroelectric power station. Smelters are historically built in the vicinity of powerful, cheap and environmentally friendly energy sources, such as hydroelectric power stations, even today. The Pittsburgh Reduction Company was reorganised into the Aluminium Company of America, or more commonly known, Alcoa in 1907.

In 1889 Austrian chemist Carl Josef Bayer developed a new, more efficient process, which is since referred to as Bayer process, for the extraction of aluminum oxide from bauxite.

More specific, he invented a cheap and feasible alumina (aluminium oxide) production method in 1889 when working in St. Petersburg (Russia) at the Tentelevsky production facility. Going forward, Alumina became the basic raw material for aluminium production. The scientist added bauxite into an alkali solution and heated it in a closed vessel finding that the bauxite dissolved but not completely. Bayer did not find aluminium in the undissolved remains; however he found that entirety of the aluminium in the bauxite was transferred to the alkali solution during the process.

Aluminium production processes used today are based on the Bayer and Hall-Héroult processes.