What are medium Mn steels ?

Medium Mn steels establish an imnportant class of novel alloys in the 3rd generation of advanced high strength steels (AHSS).
These alloys have a manganese content between 3-12 wt.% and often multiple phase-like microstructure ingredients and phases.
They show a good combinations of high to ultra-high strength at quite high total elongation. Ultra-fine grained microstructures can be achieved via intercritical annealing, resulting in a complex multi-phase microstructure consisting of several phases such as different types of austenite (retained, partition
stabilized, reverted), martensite, ferrite and sometimes also delta ferrite.
Especially the different types of austenite in medium Mn steels promote enhanced ductility due to the higher strain hardenability enabled by dislocation accumulation, TRIP effect or even the TWIP effects.
Adjusting alloy composition and adequate selection of the intercritical annealing temperature and pre-deformation results in the formation of different types of beneficial microstructures at room temperature. 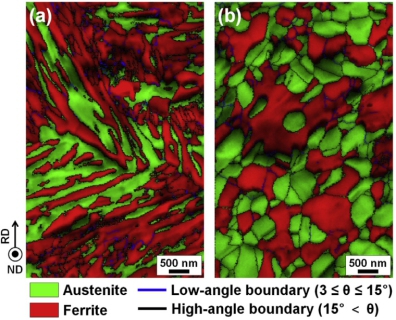 What is the role of prior austenite grain boundaries and microstructural on the impact toughness of medium Mn steels ? 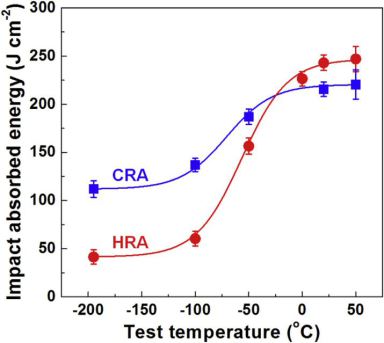 In this project a simple model has been introduced to predict grain boundary segregation in solid solutions by coupling available bulk thermodynamic data with a meanfield description of the grain boundary character. The model is confronted with experimental results obtained in Fe-Mn alloys analysed by atom probe tomography. This model successfully predicts a first order transition or a discontinuous jump in the composition of the grain boundary which kinetically implies the formation of spinodal Mn fluctuations that tend to grow further with time within the segregated region. The increase in solute concentration at the grain boundary leads to an increase of the
enthalpy of the boundary and to its embrittlement at lower temperatures. Once austenite is formed, the amount of segregated solute Mn on the grain boundaries is drastically reduced and the toughness of the grain boundary is increased.

Medium Mn steels containing reverted nanoscale austenite islands or films dispersed in a martensitic or ferritic matrix show excellent strength, ductility
and toughness. The underlying microstructural mechanisms responsible for these improvements are not yet fully understood, but are observed to be strongly connected to the island or film size of the (reverted) nanoscale austenite. Two main micromechanical effects are conceivable in this context:

(i) interaction of reverted nanoscale austenite with microcracks from the matrix (crack blunting or arresting); 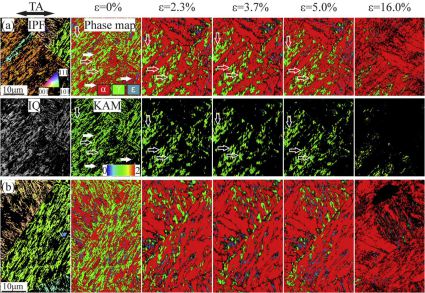 Medium Mn steel: Images of the deformation sequence of two outlined areas (a) and (b) in Fig. 4a. EBSD phase maps and inverse pole figure (IPF) with respect to tensile axis (TA) are provided for both areas. For area (a), the image quality (IQ) and KAM map

Is the martensite to austenite reversion in medium Mn steels diffusive or displacive ?

We studied the effect of local martensite-to-austenite reversion on microstructure and mechanical properties with the aim of designing ductile medium Mn steels. Following a combinatorial screening with tensile and hardness testing on a matrix of six alloys (0 - 5 wt.% Mn, 0 - 2 wt.% Si, constant 13.5 wt.% Cr and 0.45 wt.% C) and seven martensite tempering conditions (300 - 500 °C, 0 -30 min), investigations were focussed on martensite-to-austenite reversion during tempering as function of chemical composition and its correlation with the mechanical properties. While Mn additions promoted austenite formation (up to 35 vol.%) leading to a martensitic-austenitic TRIP steel with optimum mechanical properties (1.5 GPa ultimate tensile strength and 18 % elongation), Si led to
brittle behaviour despite even larger austenite contents. Combined additions of Mn and Si broadened the temperature range of austenite reversion, but also significantly lowered hardness and yield strength at limited ductility. These drastically diverging mechanical properties of the probed steels are discussed in light of microstructure morphology, dispersion and transformation kinetics of the
austenite, as a result of the composition effects on austenite retention and reversion.

Medium Mn steels can have increased resistance to crack propagation

Fatigue failures create enormous risks for all engineered structures, as well as for human lives, motivating large safety factors in design and, thus, inefficient use of resources. Inspired by the excellent fracture toughness of bone, we explored the fatigue resistance in metastability-assisted multiphase steels. We show here that when steel microstructures are hierarchical and laminated, similar to the substructure of bone, superior crack resistance can be realized. Our results reveal that tuning the interface structure, distribution, and phase stability to simultaneously activate multiple micromechanisms that resist crack propagation is key for the observed leap in mechanical response. The
exceptional properties enabled by this strategy provide guidance for all fatigue-resistant alloy design efforts.

What is a spectral TRIP effect in medium Mn steels?

Introduction of interlath reverted austenite is an effective method to design ductile lath medium Mn martensitic steels. The challenge in this concept is that all reverted austenite films have similar mechanical stability, hence, they all undergo transformation-induced plasticity (TRIP) at the same strain level. Here we propose a new thermo-mechanical treatment route to activate the TRIP effect over a broad strain regime and refer to it as ‘spectral TRIP effect’. It aims at spreading the micro-mechanical stability of reverted austenite grains by widening the austenite nucleation barrier in martensite. To validate the proposed thermo-mechanical treatment route, an as-quenched medium-Mn martensitic steel was cold rolled prior to the reversion treatment at 600°C. Microstructure characterization was carried out by electron backscatter diffraction (EBSD) and electron channeling contrast imaging (ECCI). Mechanical tests show that the approach is effective. The spectral TRIP effect improves both, the strength and the ductility due to the well dispersed size distribution and the associated size-dependent deformation and phase transformation behavior of the reverted austenite grains, extending TRIP-related work hardening over a broad strain range.

Conventional martensitic medium Mn steels have limited ductility due to insufficient microstructural strain-hardening and damage resistance mecha-
nisms. It was recently demonstrated that the ductility and toughness of martensitic steels can be improved without sacrificing the strength, via partial
reversion of the martensite back to austenite. These improvements were attributed to the presence of the transformation-induced plasticity (TRIP)
effect of the austenite phase, and the precipitation hardening (maraging) effect in the martensitic matrix. However, a full micromechanical understanding of this ductilizing effect requires a systematic investigation of the interplay between the two phases, with regards to the underlying deformation and damage micromechanisms. For this purpose, in this work, a Fe–9Mn–3Ni–1.4Al–0.01C (mass%) medium-Mn TRIP maraging steel is produced and heat-treated under different reversion conditions to introduce well-controlled variations in the austenite–martensite nanolaminate microstructure. Uniaxial tension and impact tests are carried out and the microstructure is characterized using scanning and transmission electron microscopy based techniques and post mortem synchrotron X-ray diffraction analysis. The results reveal that (i) the strain partitioning between austenite and martensite is governed by a highly dynamical interplay of dislocation slip, deformation-induced phase transformation (i.e. causing the TRIP effect) and mechanical twinning (i.e. causing the twinning-induced plasticity effect); and (ii) the nanolaminate microstructure morphology leads to enhanced damage resistance. The presence of both effects results in enhanced strain-hardening capacity and damage resistance, and hence the
enhanced ductility.

We study grain boundary embrittlement in a quenched and tempered Fe–Mn high-purity model martensite alloy using Charpy impact tests and grain boundary characterization by atom probe tomography. We observe that solute Mn directly embrittles martensite grain boundaries while reversion of martensite to austenite at high-angle grain boundaries cleans the interfaces from solute Mn by partitioning the Mn into the newly formed austenite, hence restoring impact toughness. Microalloying with B improves the impact toughness in the quenched state and delays temper embrittlement at 450 °C. Tempering at 600 °C for 1 min significantly improves the impact toughness and further tempering at lower temperature does not cause the embrittlement to return. At higher temperatures, regular austenite nucleation and growth takes place, whereas at lower temperature, Mn directly promotes its growth. 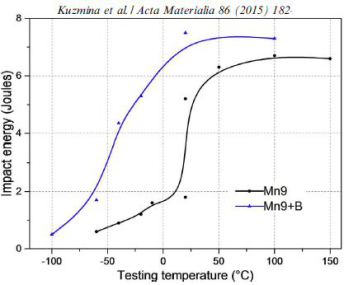 What is the role of chemical gradients across phase boundaries between martensite and austenite in medium Mn steel ?

Partitioning at phase boundaries of complex steels is important for their properties. We present atom probe tomography results across martensite/austenite interfaces in a precipitation-hardened maraging-TRIP steel (12.2 Mn, 1.9 Ni, 0.6 Mo, 1.2 Ti, 0.3 Al; at.%). The system
reveals compositional changes at the phase boundaries: Mn and Ni are enriched while Ti, Al, Mo and Fe are depleted. More specific, we observe up to 27 at.% Mn in a 20 nm layer at the phase boundary. This is explained by the large difference in diffusivity between martensite and austenite. The high diffusivity in martensite leads to a Mn flux towards the retained austenite. The low diffusivity in the austenite does not allow accommodation of this flux. Consequently, the austenite grows with a Mn composition given by local equilibrium. The interpretation is based on DICTRA and mixed-mode diffusion calculations (using a finite interface mobility).

How does the competition between formation of carbides and reversed austenite work during tempering of a medium-manganese steel?

To answer this question we investigated the thermodynamics and kinetics of carbide precipitation in a cold-rolled Fe-7Mn-0.1C-0.5Si medium manganese steel during low temperature tempering. The material was annealed up to
24 h at 450°C in order to follow the kinetics of precipitation. Using  thermodynamics and kinetics simulations, we predicted the growth of M23C6 carbides according to the local-equilibrium negligible partition (LENP) mode where carbide growth is controlled by the diffusion of carbon, while maintaining
local chemical equilibrium at the interface. Atom-probe tomography (APT) measurements performed on samples annealed for 1, 6 and 24 h at 450°C confirmed that LENP is indeed the mode of carbide growth and that Mn segregation is necessary for the nucleation. Additionally, we observed the heterogeneous nucleation of transition carbides with a carbon content between 6 and 8 at% at segregated dislocations and grain boundaries. We describe these carbides as a complex face-centered cubic transition carbide type (CFCC-TmC phase) obtained by the supersaturation of the FCC structure by carbon that will act as precursor to the more stable gamma-M23C6 carbide that forms at the dislocations and grain boundaries. The results suggest that the addition of carbon does not directly favor the formation of austenite, since Mn is consumed by the formation of the carbides and the nucleation of austenite is thus retarded to later stages of tempering as every FCC nucleus in the initial stages of tempering is readily converted into a carbide nucleus. We propose the following sequence of transformation: (i) carbon and Mn co-segregation to dislocations and grain boundaries; (ii) formation of FCC transition carbides; (iii) growth controlled according to the LENP mode and (iv) austenite nucleation and growth. 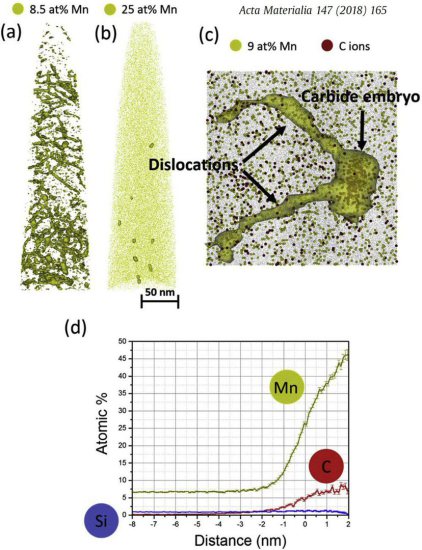 What are linear complexions in medium Mn steels?

For 5000 years, metals have been mankind’s most essential materials owing to their ductility and strength. Linear defects called dislocations carry atomic shear steps, enabling their formability. We report chemical and structural states confined at dislocations. In a body-centered cubic medium Mn Fe–9 atomic percent Mn alloy, we found Mn segregation at dislocation cores during heating, followed by formation of face-centered cubic regions but no further growth. The regions are in equilibrium with the matrix and remain confined to the dislocation cores with coherent interfaces.The phenomenon resembles interface-stabilized
structural states called complexions. A cubic meter of strained alloy contains up to a light year of dislocation length, suggesting that linear complexions could provide opportunities to nanostructure alloys via segregation and confined structural states.