What is Sustainable Metallurgy and why is it important ?

Metallic materials which have enabled progress over thousands of years and given entire ages their name, are now facing severe limits set by sustainability. The accelerated demand for practically all structural alloys in key areas such as energy, infrastructure, medicine, safety, construction and transportation creates huge growth rates of up to 200% until 2050. Yet, most of these metallic materials are energy, greenhouse gas and pollution intense when extracted and manufactured. In a set of projects we study approaches to improve the sustainability of and through structural metallic alloys. We work on ideas related to progress in direct sustainability for different steps along the value chain including CO2-reduced primary synthesis; recycling; scrap-compatible alloy design, contaminant tolerance of alloys, and improved alloy longevity through corrosion protection, damage tolerance and repairability for longer product use. We also investigate how structural materials enable improved energy efficiency through reduced weight, higher thermal stability, and better mechanical properties. The respective leverage effects of the individual measures on rendering structural alloys more sustainable can be quantified.

Why are metals of special interest in the context of sustainability ?

Metallic alloys ply a key role of historic and enduring importance for industry and society.  They have paved the path of human civilization with load-bearing applications that can be used under the harshest environmental conditions, witnessed by whole ages that carry their names. Only metallic materials encompass such diverse features as strength, hardness, workability, damage tolerance, joinability, ductility and toughness, often furnished with additional functional properties such as corrosion resistance, thermal and electric conductivity and magnetism.

This versatility in property combinations comes together with a vast understanding of thermo-mechanical processing of metals (build-up over millennia of metals use), which in turn enable numerous production, manufacturing, design, repair, and recycling pathways.

Because of these property advantages, metals have been key-enablers for multiple applications in the fields of energy conversion, transportation, construction, communication, health, safety, and infrastructure. Examples over the ages have been agricultural tools, manufacturing machinery, energy conversion engines and reinforcements in huge concrete-based infrastructures. Recent applications include structural alloys for weight reduction combined with high strength and toughness in the transportation sector, efficient turbines operating at higher temperatures for power plants and air traffic, components for safe nuclear and fusion power and disposal, targeted endurance or corrosive dissolution of biomedical implants8, embrittlement resistant infrastructures for hydrogen-based industries9 or reusable spacecraft to name a few. This success story has turned metallurgical alloys and products into a key innovation and economy booster: the global market for metals is about 3000 billion € per year.

What is the environmental impact of metals and their production?

The great success of metallic materials and the associated industries also means that they have an important role to play in addressing the current environmental challenges. The availability of metals (most of the elements used in structural alloys are among the most abundant), efficient mass producibility, low price and amenability to large scale industrial production (extraction and beneficiation up to the metal alloy) and manufacturing (downstream operations after solidification) have become a significant environmental burden:

The sheer magnitude of the worldwide production of metals leads to a total energy consumption of about 53 Exa-Joule (1018 Joule) (8% of the global energy) and almost 30% of industrial CO2 equivalent emissions (4.4 Gt CO2eq) when only counting steels and aluminum alloys (the largest fraction of metal use by volume). While the production volumes of nickel and titanium are much smaller, their impact is worthy of remark because of the eminent role they play for aerospace and biomedical materials, and the strong link to stainless steel for the case of nickel (stainless steel accounts for two-thirds of nickel’s uses). The worldwide annual production in terms of mass, energy and CO2 is presented here, with metal lost in manufacturing for these four key structural metals (where Ni use in stainless steel is the focus).

Mining and production of these materials has a staggering impact in terms of resource use, emissions, and waste generation, and this impact continues to grow, because of trends around urbanization, electrification, and digitization (in 1950 less than 30% of the population lived in cities this number is projected to exceed 60% by 2025). In addition, there are significant byproducts of both industries that cause significant environmental damage when not managed properly in perpetuity (losses throughout the supply chain are shown here along with the quantities of material recovered as scrap). The two largest material groups alone create huge mining and extraction byproducts, namely, 2,400 million tons/yr tailings and 220 million ton/yr slags for the case of steels and 160 million ton/yr bauxite residue for the case of Al.
Recent examples, such as an iron-ore mining dam collapse in the mineral-rich state of Minas Gerais, Brazil in 2019 or the Ajka spill in 2010 where 100 thousand m3 of red mud breached a dam, show that these byproducts provide a constant threat and risk associated with extraction of the precursors to structural alloys.
These significant energy consumption challenges and detrimental environmental impacts are the biggest obstacle for further use of structural metals (see Table 1 and Fig. 1 in the original paper).

The role of steels for the reduction of greenhouse gas emissions

The primary synthesis of steel poses the biggest challenge when aiming at reducing greenhouse gas emssions owing to the huge quantities produced each year (1.8 billion tons per year) and the use of carbon carriers as reductants (since about 3500 years).

In the production of iron (which is the precursor of steel) via the conventional process route based on the use of iron ore - i.e. via a blast furnace in which the iron ore is melted into pig iron and a steel converter in which the pig iron is subsequently further purified - greenhouse gases, especially carbon dioxide (CO2), are produced in huge quantities. 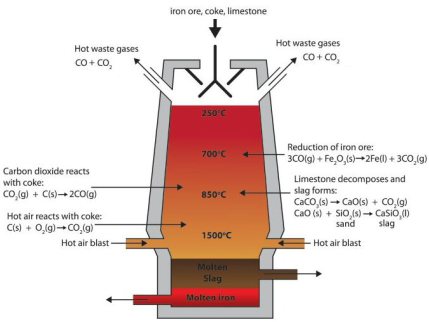 Chemical reaction steps in a typical blast furnace reactor where the metallic product is a eutectic Fe-C melt. 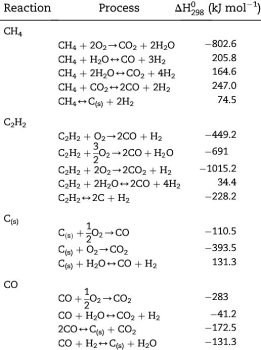 What is the role of the blast furnace process on greenhouse gas emissions ?

When producing iron via the blast furnace process route around 1.7 tons of CO2 emissions are produced per ton of crude steel. Most of the CO2 is generated in a chemical process that takes place in the blast furnace.

The oxygen in the iron ore has to be split off. Today, coke produced from coal in coking plants is usually used for this purpose. It is heated with hot air in the lower part of the blast furnace and gasified with the oxygen content of the air to form the reducing gas carbon monoxide.

This means that the main chemical reaction producing the molten iron is Fe2O3 + 3CO → 2Fe + 3CO. This reaction is actually subdivided into a chain of multiple steps, with the first one being that preheated blast air blown into the furnace reacts with the carbon in the form of coke to produce carbon monoxide and heat: 2 C(s) + O2(g) → 2 CO.

The gas rises to the top and binds the oxygen contained in the iron ore, converting it to carbon dioxide (CO2). The liquid pig iron is then converted to crude steel in a converter by blowing in oxygen to remove other interfering components such as carbon, silicon, phosphorus or sulphur particles. 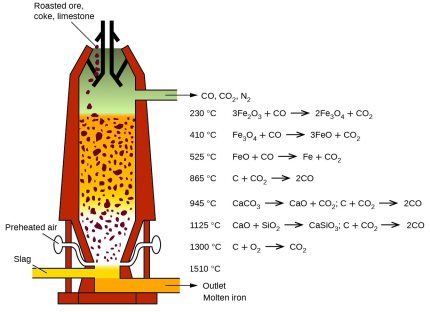 Temperatures and chemical reaction steps in a blast furnace.

An imprtant factor is the composition of the coke gas that is feed into the blast furnace: 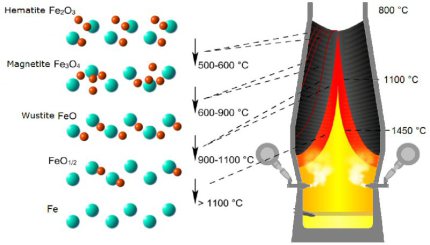 Oxidation states of iron in the blast furnace.

In the blast furnace, several chemical processes take place simultaneously, in which the ore is reduced to iron over several stages and the non-reducible fractions are transferred into the slag.

In order to initiate a reduction of the ore in the first place, however, the reducing gases must at first be generated. This is done in the lower part of the furnace during the combustion of the carbon contained in the coke with oxygen.

However, two endothermic, i.e. heat-consuming, reactions immediately following this lower the temperature again to about 1600 to 1800 °C.

The two reducible gases carbon monoxide and hydrogen rise upwards against the material flow in the blast furnace.

In the temperature zone between 400 and 900 °C the so-called "indirect reduction" takes place. Over three stages, the various iron oxides react with carbon monoxide or hydrogen, respectively, until finally metallic iron is obtained.

What is the balance among the carbon monoxide and hydrogen reduction processes in the blast furnace ?

As long as the carbon dioxide (CO2) produced remains in the temperature range of over 1000 °C, it is repeatedly regenerated to carbon monoxide (CO) by the Boudouard reaction and is available again for the reduction process.

The competing iron ore reduction by hydrogen is particularly effective at around 800 °C.

A content of only 10 % hydrogen in the reaction gas triples the rate of reduction, but the rate of reduction decreases again as the temperature increases further. Also, the grain size of the ore must not exceed a certain level so that the diffusion paths of the hydrogen do not become too large.

What is electronic scrap and how is it recycled?

Electronic waste or electrical and electronic equipment or components thereof which are no longer used because they either no longer fulfil their intended purpose or have been replaced by better equipment. Electronic scrap can be classified into different categories.

According to a UN report, approximately 50 million tons of electronic waste are generated worldwide every year, of which only 20% is recycled in an orderly manner.

What are the gains and risks when recycling electronic scrap?

On the one hand, electronic scrap consists of valuable materials that can be recovered as secondary raw materials. On the other hand, it contains a variety of heavy metals such as lead, arsenic, cadmium and mercury, halogen compounds such as polybrominated biphenyls, PVC, chlorinated, brominated and mixed halogenated dioxins and other highly toxic and environmentally hazardous substances. Dioxins are carcinogenic, fruit-damaging, very persistent and accumulate in fatty foods (meat, milk, etc.) (bioaccumulation). The use and placing on the market of components containing PCBs has been prohibited in the EU since the 1980s (PCB Prohibition Ordinance), which means that they are no longer present to any significant extent in today's electrical and electronic waste.