The element Tantalum has the aomic number 73 and the atomic weight 180.95.

Tantalum was discovered by Anders Gustaf Ekenberg, a Swedish chemist, in 1802. Many scientists believed that he had only discovered an allotrope of niobium, an element that is chemically very similar to tantalum. The issue was finally settled in 1866 when Galissard de Marignac, a Swiss chemist, proved that tantalum and niobium were two distinct elements. The first relatively pure samples of tantalum were produced in 1907.
Today, tantalum is primarily obtained from the minerals columbite ((Fe, Mn, Mg)(Nb, Ta)2O6), tantalite ((Fe, Mn)(Ta, Nb)2O6) and euxenite ((Y, Ca, Er, La, Ce, U, Th)(Nb, Ta, Ti)2O6).

Tantalum is a strong, ductile metal that is nearly immune to chemical attack at room temperatures. It can be drawn into a fine wire that is used to evaporate metals, such as aluminum.  It has a high melting point and is frequently used as a substitute for platinum,  which is more expensive. Tantalum is used to make components for chemical plants, nuclear power plants, airplanes and missiles. Tantalum does not react with body fluids and is used to make surgical equipment.

Also Tantalum also not irritate the body and is used to make surgical sutures as well as implants, such as artificial joints and cranial plates. Tantalum is alloyed with steel to increase steel's ductility, strength and melting point.

Pure Tantalum can be cold rolled and annealed at various temperatures. The crystallographic textures can be studied by EBSD mapping and / or by measuring X-ray pole figures and subsequently calculating the orientation distribution function. Here, the microstructure was investigated via optical microscopy. The rolling textures were explained by dislocation glide on {11O} <111), {112} <111), and {123} (111) glide systems. Corresponding simulations were carried out using relaxed constraints Taylor theory. Interpretation of the annealing textures was carried out via continuous recrystallisation in the case of weak deformations and temperatures and via discontinuous recrystallisationfor higher rolling degrees and temperatures, respectively. 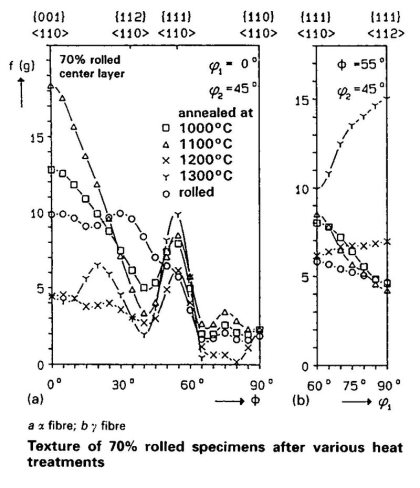 Tantalum is a bee transition metal with a melting point of 3000°C. Its investigation is of interest mainly for two reasons. First Ta is suitable for the examination of basic aspects of deformation, recovery, and recrystallisation of ~
bee metals over a wide temperature range, since it does not undergo phase transformation during annealing. Secondly Ta is of industrial importance due to its high melting point, high formability, low vapour pressure, good thermal and electrical conductivity, and biocompatibility. Quantitative texture analysis and metallography represent a very sensitive tool for the investigation of rolled
and annealed polycrystalline Ta, since the corresponding physical mechanisms, i.e. dislocation glide and recrystallisation, lead to characteristic changes of the orientation distribution of the crystallites.