The metal men is a comic series.

It was developed around a group of advanced artificially intelligent robots, created by scientist Dr. William Magnus.

The six robots were:

The Metal Men were created by Robert Kanigher, pencilled by Ross Andru and inked by Mike Esposito for DC Comics in 1962.

The comic proved unexpectedly popular and the characters were revived for more stories under their own title, and had subsequent appearances in various series in the DC Universe.

The group's personalities mirrored their namesake metals, being dictated by devices called "responsometers".

Each Metal Man also possessed abilities that reflected the traits of their namesake metal: Gold could stretch his form almost infinitely, Iron was super strong. Lead could block harmful radiation by morphing into thick shields, Mercury could melt and pass through small spaces before reforming, while Platinum and Tin could stretch, flatten or spin into fine filaments. 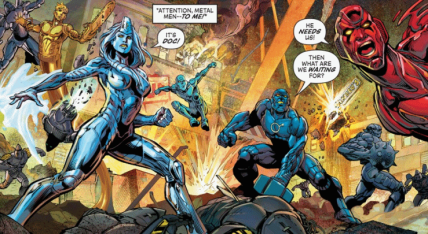