Why do we need combinatorial high entropy alloy search?

High-entropy alloys (HEAs) with multiple principal elements open up a practically infinite space for designing novel materials. Probing this huge material universe requires the use of combinatorial and high-throughput synthesis and processing methods. Therefore we use different combinatorial experimental methods that have been introduced to accelerate the development of novel HEAs, namely, rapid alloy prototyping, diffusion-multiples, laser additive manufacturing and combinatorial co-deposition of thin-film materials libraries. While the first three approaches are bulk methods which allow for downstream processing and microstructure adaptation, the latter technique is a thin-film method capable of efficiently synthesizing wider ranges of composition and using high-throughput measurement techniques to characterize their structure and properties. Additional coupling of these high-throughput experimental methodologies with theoretical guidance regarding specific target features such as phase (meta)stability allows for effective screening of novel HEAs with beneficial property profiles

High-entropy alloys (HEAs) are multi-component metallic materials consisting of four or more elements in high or even equimolar fractions. This design principle originally aimed at the stabilization of single phase massive solid solutions through high configurational entropy. Also, it shifts the search space for new alloys from the corners towards the centers of phase diagrams. Beyond the original concept of single phase solid solutions, several variants of this new design approach have been suggested including non-equiatomic, multiphase, interstitial, duplex, precipitate containing and metastable HEAs. Several typical HEA systems have been developed, including face-centered cubic (FCC) structure-based strong and ductile HEAs, body-centered cubic (BCC) structure-based refractory HEAs, hexagonal-close packed (HCP) structure-based HEAs, light-weight HEAs and precious-metal functional HEAs. The number of HEA compositions explored is increasing rapidly due to the growing research efforts in this field, driven by promising properties which have been observed for some of these materials such as for instance good cryogenic toughness and high strain hardening.
The main challenge that HEA research is facing is how to explore the huge compositional and microstructural spaces, with the aim to efficiently identify novel materials with promising property profiles or even so far undiscovered features. Therefore, we review several approaches which have been used for the efficient, combinatorial and high-throughput metallurgical synthesis and processing of such alloys.
Four main directions are presented and discussed. The first one is rapid alloy prototyping which basically consists in an efficient coupling of casting, hot rolling, homogenization, cold rolling and recrystallization annealing in conjunction with subsequent characterization of microstructure and properties. The second one utilizes diffusion couples which can serve for alloy synthesis through systematic intermixing among blocks of pre-alloyed composition. The third one is combinatorial laser additive manufacturing methods that enable synthesis of compositionally graded materials which allows many variants to be probed efficiently for instance by using established micromechanical testing methods. The fourth one consists in combinatorial synthesis of multinary thin-film materials libraries, i.e. well-defined and large thin-film composition gradients across a substrate wafer fabricated in single experiment.
In the following we present these methods and provide examples of their use in the field of HEA development. Also, we critically discuss them regarding aspects such as compositional homogeneity, microstructure effects and size dependence. The related characterization methods for samples produced by different combinatorial synthesis techniques are briefly introduced. Additionally, we reflect the advantages and disadvantages of the different combinatorial synthesis techniques and compare them with each other to provide guidance for identifying the appropriate methods for specific combinatorial HEA studies.

The recently developed bulk combinatorial metallurgical screening method, referred to as rapid alloy prototyping (RAP), is a semi-continuous high-throughput bulk casting, rolling, heat treatment and sample preparation approach, and has been successfully applied to screening weight-reduced TWIP-type steels, high strength martensitic steels and HEAs. Since this approach involves synthesizing bulk samples of specific compositions, it is particularly appropriate for screening structural alloys, where the strength, toughness and ductility are strongly dependent on the entire thermomechanical history and microstructural evolution with strong effects associated with internal length scales such as grain size and phase dispersion.
For the 3d transition metal HEAs, well-established bulk metallurgical processes are capable of synthesizing high-quality sheets by controlling the thermomechanical processing parameters properly. The RAP technique has been employed for rapid trend screening of suited alloy compositions. As schematically illustrated in Fig. 2a, the RAP approach enables casting of five different alloys with tuned compositions of an alloy system in one operation. This is achieved by using a set of five copper molds which can be moved stepwise inside the furnace. Although the solidification rate in the RAP casting setup is deliberately high to avoid macro-segregations, in as-cast condition the distributions of multiple principal elements are typically not fully homogeneous in the bulk HEAs with their coarse dendritic microstructure owing to classical Scheil segregation. Following casting, the alloy blocks with a thickness of 10 mm and varying compositions are subsequently hot-rolled in air (Fig. 2b). This step is required for removing the dendritic microstructure and possible inherited casting porosity. The hot-rolling temperature can be adjusted for the specific HEA compositions and the rolling reduction is generally above 50%. Sometimes, even the hot-rolled HEAs still carry some inherited compositional inhomogeneity. Therefore, after the last hot-rolling pass, the HEA plates are homogenized at high temperatures (e.g., 1200 oC) for several hours (e.g., 2 h) under Ar atmosphere, followed by water quenching (Fig. 2c). For HEAs appropriate homogenization is critically important for achieving uniform distributions of the multiple principal elements in the solid solution structure owing to the sometimes low substitutional diffusion constants in these materials. Hence the homogenization time should consider the diffusion kinetics and the dimensions of the alloys sheets – generally the larger (or thicker) the alloy sheets, the longer the required homogenization time. The homogenized HEA plates are cut perpendicular to the hot-rolling direction to obtain some segments with smaller size for the subsequent processes and characterization (Fig. 2c). The homogenized HEAs generally show homogeneous distribution of the multiple principal elements and are devoid of cracks or pores. HEAs with higher amounts of Mn (e.g. >10 at. %), however, may contain inclusions enriched in Mn which are often hard to remove even when imposing with long-term homogenization. 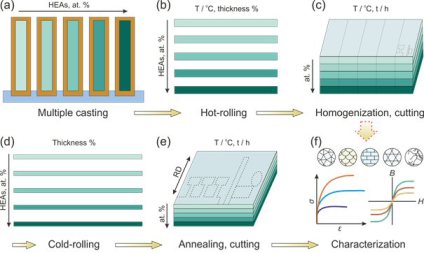 FIG1: Schematic sketches illustrating the rapid alloy prototyping (RAP) approach for combinatorial synthesis and processing of high-entropy alloys. The RAP approach can also be applied to many other material systems including advanced high-strength steels

Since the homogenized HEA plates generally exhibit a large grain size, cold-rolling (Fig. 1d) and annealing (Fig. 1e) processes are required to refine the microstructure towards better mechanical properties. The thickness reduction during cold-rolling is generally higher than 50% to obtain a fully deformed microstructure and sufficient stored strain energy in the alloys. Annealing is conducted for recrystallization of the microstructure and for the control of the grain sizes, hence, times and temperatures are in each case adjusted according to the targeted grain sizes and crystallographic textures. After these microstructure-tuning processing steps, samples for microstructure investigation and performance testing are machined from the alloy segments by spark erosion. For accelerated alloy development, high efficiency of this cutting process is realized by clamping the five alloy segments on top of each other for simultaneous machining (Fig. 1e). For this purpose proper marks should be placed on the alloy sheets with varying compositions and processing parameters. Following the sample preparation, various characterizations (Fig. 1f) can be efficiently performed to probe the composition-microstructure-properties relationships in the HEA systems.
As mentioned above, alloys with an identical bulk composition but in different processing conditions may have significantly different compositional homogeneity state, microstructure, and properties. This is a general scenario for all alloys including RAP processed HEAs. As a typical example, Fig. 2 shows the microstructure, compositional homogeneity state and tensile properties of a recently developed interstitially carbon alloyed HEA at various conditions during the RAP process. The nominal composition of the interstitial HEA is Fe49.5Mn30Co10Cr10C0.5 (at.%) and it shows joint activation of mechanical twinning and phase transformation from the FCC to the HCP phase upon strain loading. The novel material is thus referred to as ‘TWIP-TRIP-iHEA’ (TWIP: twinning induced plasticity; TRIP: transformation induced plasticity; iHEA: interstitial high-entropy alloy). The microstructure of the as-cast iHEA shows a coarse-grained FCC matrix (~300 μm) containing a number of HCP islands (Fig. 2a1-2). The BSE image (Fig. 2a2) and energy dispersive X-ray spectroscopy (EDS) map of Mn (Fig. 3a3) probed on an identical sample region reveal the cast dendrites with inhomogeneous elemental distribution. Basically, the HCP islands locate at the regions depleted in Mn and enriched in Fe. This can be explained by the fact that regions depleted in Mn and enriched in Fe have lower stacking fault energy, hence, promoting formation of HCP phase compared to the regions enriched in Mn and depleted in Fe. In contrast, the microstructure of the homogenized iHEA shows a dual-phase (FCC & HCP) microstructure with equiaxed FCC grains (Fig. 2b1-2) and uniformly distributed elements (Fig. 2b3). These differences in microstructure and compositional homogeneity clearly influence the mechanical properties, i.e., the as-cast coarse-grained iHEA shows significantly reduced ductility and strain-hardening compared to the homogenized counterpart (Fig. 2e). The detrimental effect of compositional inhomogeneity on mechanical properties of the coarse-grained iHEA was attributed to the preferred deformation-driven phase transformation occurring in the Mn depleted regions with lower stacking fault energy, promoting early stress-strain localization. After grain refinement, although the iHEAs with and without compositional homogeneity show similar recrystallized microstructure with identical average grain size, as presented in Fig. 2c and 2d, respectively, the alloy without compositional homogeneity (directly cold-rolled and annealed after casting) was characterized by almost total loss in work-hardening (Fig. 2e). This was attributed to the large local shear strains caused by the inhomogeneous planar slip in the compositionally inhomogeneous iHEA. These observations clearly suggest the importance of appropriate processing for the development of advanced HEAs. 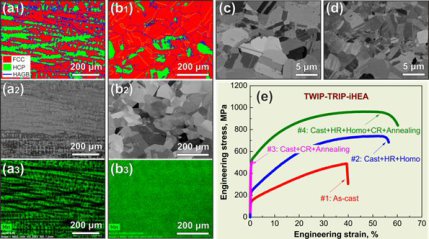 Since bulk samples can be produced by the RAP technique, all characterization methods used in conventional one-alloy-at-a-time practice, such as X-ray Diffraction (XRD), electron backscatter diffraction (EBSD), EDS, tensile testing etc., can also be applied to explore the composition-microstructure-properties relationships in the combinatorial RAP processed HEAs. However, the number of alloy compositions can be probed in one RAP practice is relatively limited (generally 5) compared to other combinatorial synthesis techniques discussed later.
To promote the efficient combinatorial development of HEAs, theoretical guidance is critically important, capable of suggesting suited mechanical, stability, corrosion or magnetic trends for the design of alloy compositions. For instance, to design strong and ductile HEAs with the assistance of simulations and the RAP technique, we found that the phase (meta)stability of the HEAs is a key feature to tune the compositions of certain HEA systems to introduce activation of multiple deformation mechanisms, thereby improving the range of accessible strength-ductility combinations. More specifically, for FCC structured HEA systems the phase (meta)stability can be represented by the intrinsic stacking fault energy which is mainly determined by the free energy difference between the FCC and HCP phases. Accordingly, parameter-free ab initio simulations and thermodynamic calculations are powerful to obtain stacking fault energies and/or free energy differences between phases to assist the combinatorial HEA development.

The other alloy rapid prototyping methods are demonstrated in the paper below.