We introduced a novel strategy for designing a new class of HEAs incorporating additional interstitial elements.

We refer to these materials as to interstitial high-entropy alloys (iHEAs).

Specifically the use of interstitial carbon doping results in an alloy class which is chartacterized by the joint activation of twinning- and transformation-induced plasticity (TWIP and TRIP) by tuning the matrix phase’s instability in a metastable TRIP-assisted dual-phase HEA. Besides TWIP and TRIP, such alloys benefit from massive substitutional and interstitial solid solution strengthening as well as from the composite effect associated with its dual-phase structure. Nanosize particle formation and grain size reduction are also utilized. The new interstitial TWIP-TRIP-HEA thus unifies all metallic strengthening mechanisms in one material, leading to twice the tensile strength compared to a single-phase HEA with similar composition, yet, at identical ductility. 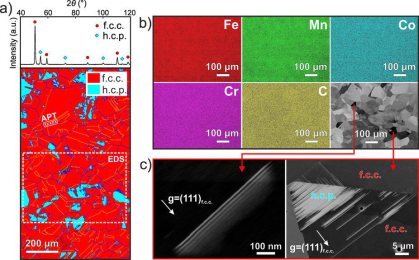 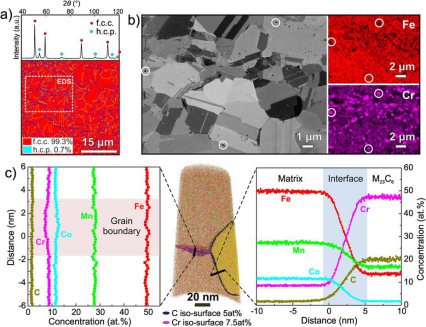 Interstitial high entropy alloy: (a) XRD and EBSD patterns reveal the f.c.c. matrix and a small fraction of h.c.p. phase prior to deformation. (b) ECC image and EDS maps corresponding to the identical region marked in (a) show that the nano-sized particle

Similar as in some of the FCC HEA systems, where a beneficial effect of interstitial blending with C (or N or even H) can be observed, an anomalous interstitial strengthening effect of O was found in the single-phase equiatomic BCC TiZrHfNb alloy family by Lei et al. (i2018). in this BCC high entropy alloy interstitial O remarkably improved the mechanical properties at room temperature substantially: the tensile strength increased by 48% and the tensile ductility by 95% with 2 at.% oxygen doping of TiZrHfNb. The O forms ordered complexes that simultaneously pin dislocations and promote their cross slip and multiplication.

What is the role of Hydrogen as interstitial element in Interstital High Entropy Alloys?

Even the most harmful interstitial element in metallic alloys, H, has been found to lend a certain resistance to hydrogen embrittlement in High Entropy Alloys. This effect was attributed to the fact that H reduces the material’s stacking fault energy, thus providing higher local strain hardening.

More specific, it was observed that hydrogen in an equiatomic CoCrFeMnNi high-entropy alloy leads not to catastrophic weakening, but instead increases both, its strength and ductility. While high-entropy alloys originally aimed at achieving entropy-driven phase stabilization, hydrogen blending acts opposite as it reduces phase stability.

This effect, quantified by the alloy’s stacking fault energy, enables nanotwinning which increases the material’s work-hardening. These results turn a bane into a boon: hydrogen does not generally act as a harmful impurity, like in many other metallic alloys, but can be utilized for tuning beneficial hardening mechanisms. This opens new pathways for the design of strong, ductile, and hydrogen tolerant materials. 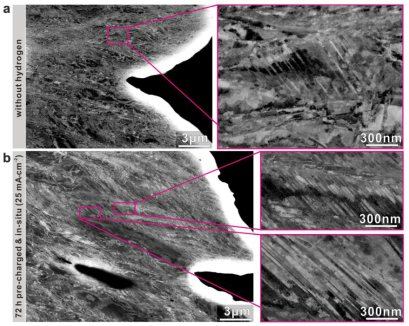 What is the effect of Boron doping on high-entropy alloys?

Recently we developed a new class of high-entropy alloys (HEAs) doped with Boron.

HEAs are metallic materials that use multiple principal elements in similar compositional fractions. The equiatomic Fe20Mn20Cr20Co20Ni20 (at%) HEA shows attractive mechanical properties, particularly under cryogenic conditions. Yet, it lacks sufﬁcient yield and ultimate tensile strengths at room temperature. To strengthen these materials, various strategies have been proposed in the past mainly by tuning the composition of the bulk material while no efforts have been made to decorate and strengthen the grain boundaries.

Here, we introduce a new HEA design approach that is based on compositionally conditioning the grain boundaries instead of the bulk. We found that as little as 30 ppm of boron doping in single-phase HEAs, more speciﬁc in an equiatomic FeMnCrCoNi and in a non-equiatomic Fe40Mn40Cr10Co10 (at%), improves dramatically their mechanical properties, increasing their yield strength by more than 100% and ultimate tensile strength by ~40% at comparable or even better ductility.

What is a bidirectional transformation in metastable high entropy alloys?

We made in two high entropy alloy variants the surprising observation that in these materials not only the multiple well-known deformation mechanisms resulting from phase metastability such as martensitic phase transformation and twinning may occur but also the reverse transformations when exposed to loads. Particularly, the observation of a deformation-driven martensitic transformation from the original FCC host phase into the hexagonal close-packed (HCP) product phase and back is an intersting finding in that context. This means that the deformation-driven athermal transformation can be bidirectional, yet, in the
form of different crystallographic variants. We found this effect in two different types of metastable alloys, viz. a carbon doped and non-carbon doped metastable HEA variant. In the C-free HE alloy the deformation-induced bidirectional transformation observed under tensile loading showed formation of reverted FCC phase from a preceding martensitic HCP region. This effect was related to the reverse motion of the Shockley partials that had been generated to form the HCP martensite. In the metastable carbon-doped iHEA has we find similar effects of this bidirectional transformation induced plasticity (Bi-TRIP) and used it to create bulk nanostructures. 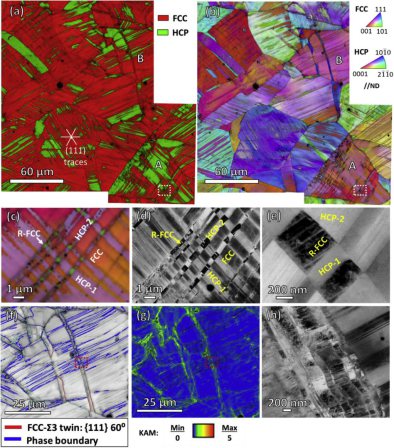 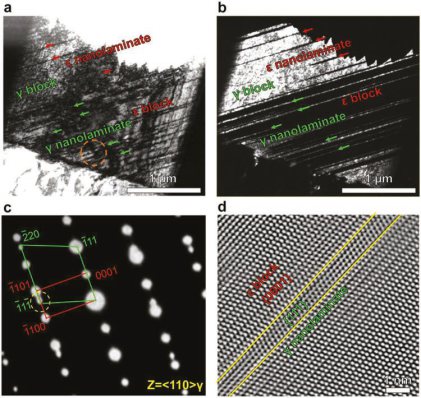 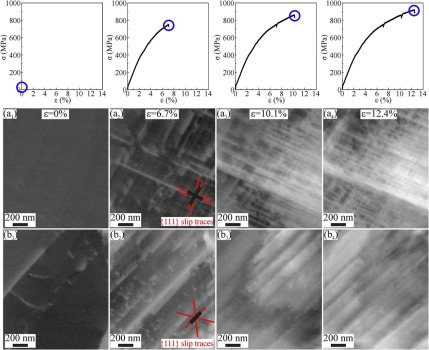 What is the strain hardening mechanism in an interstitial high-entropy alloy under cryogenic conditions?

In this project we investigate the deformation mechanisms of a carbon-doped
interstitial high-entropy alloy (iHEA) with a composition of Fe49.5 Mn30 Co10 Cr10 C0.5 (at. %) at cryogenic conditions. Very good strain hardening of this material at 77 K leads to a substantial increase in ultimate tensile strength (1300MPa) and excellent ductility (50%) compared to the room temperature values. Prior to loading, iHEAs with coarse (100 mm) and fine (6 mm) grain sizes show nearly single face-centered cubic (FCC) structure, while the fraction of hexagonal close-packed (HCP) phase reaches up to 70% in the cryogenically tensile-fractured iHEAs. Such an unusually high fraction of deformation-induced phase transformation and the associated plasticity (TRIP effect) is caused by the strong driving force supported by the reduced stacking fault energy and increased flow stress at 77 K. The transformation mechanism from the FCC matrix to the HCP phase is revealed by transmission electron microscopy (TEM) observations. In addition to the deformation-induced phase transformation, stacking faults and dislocation slip contribute to the deformation of the FCC matrix phase at low strains and of the HCP phase at medium and large strains, suggesting dynamic strain partitioning among these two phases. The combination of TRIP and dynamic strain partitioning explain the striking strain hardening capability and resulting excellent combination of strength and ductility of iHEAs under cryogenic conditions. 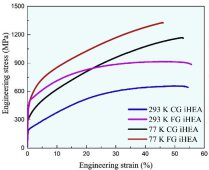 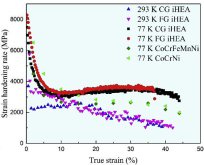 Here we demonstrate how even such a dangerous atom as hydrogen can be used as interstitial alloying element in interstitial high entropy alloys.

Since 1874 it is known that the lightest element of all, hydrogen, can be very  hamful as it causes catastrophic and unpredictable failure in metallic alloys, a phenomenon referred to as hydrogen embrittlement. All metallic alloys can suffer from it, be it in engineering parts used in vehicles, planes or power plants or in the context of future fusion and hydrogen fuel and energy storage driven industries.

Although these threats and opportunities have motivated nearly one and a half centuries of research, hydrogen remains not only a ubiquitous but also a threatening element in engineering metallic alloys. Once hydrogen has entered into metals it accumulates in voids and gets trapped at vacancies, dislocations
and internal interfaces, i.e. at lattice defects which determine the physical, chemical and mechanical properties of metals. Once occupying these sites, hydrogen damages the material through enhanced localized plasticity,
decohesion, vacancy stabilization, hydride formation or void coalescence.
Although practically all metals suffer from such phenomena, the high-entropy alloy (HEA) investigated here seems to be not only less prone to hydrogen embrittlement but it even profits from its presence.

As hydrogen obviously occupies the interstitial sites in such materials the current alloy pertains also to the class of interstitial high entropy alloys (iHEAs).

Interstitial high entropy alloys are a new class of materials originally defined as solid metallic solutions composed of five or more principal elements in
equimolar or near-equimolar ratios for yielding high configurational entropy, yet, here alloyed also with interstitial elements. This concept introduces a new path for developing advanced materials with some unique mechanical properties. The base material, the five-component equiatomic CoCrFeMnNi alloy, is one of the most appealing HEAs due to the good thermodynamic stability of its single face-centred cubic (f.c.c.) structure and the excellent mechanical properties
under various temperatures.
Owing to these features we picked this equiatomic CoCrFeMnNi model HEA for studying its changing mechanical tensile behaviour when exposed to hydrogen. We show that this material is not only resistant to hydrogen embrittlement but we even observe its beneficial role as alloying element as it improves rather than
deteriorates both, the material’s strength and ductility. The key idea behind this turnaround lies in decreasing the stability of the f.c.c. lattice structure of the matrix via hydrogen alloying to trigger more intense nanotwinning upon loading, thereby improving strain-hardening of the alloy. 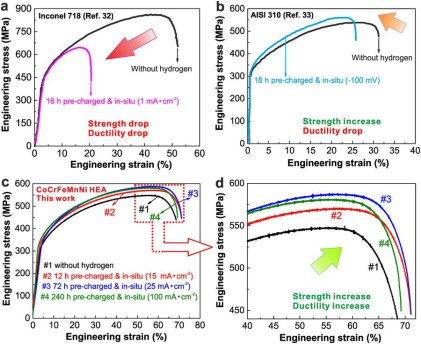 The Effect of Boron in High Entropy Alloys

Boron is an essential alloying element in High-Entropy Alloys. In this approach we introduced a new HEA design that is based on compositionally conditioning the grain boundaries instead of the bulk.We found that as little as 30 ppm of boron doping in single-phase HEAs, more specific in an equiatomic FeMnCrCoNi and in a non-equiatomic Fe40Mn40Cr10Co10 (at%), improves dramatically their mechanical properties, increasing their yield strength by more than 100% and ultimate tensile strength by ~40% at comparable or even better ductility. Boron decorates the grain boundaries and acts twofold, through interface strengthening and grain size reduction. These effects enhance grain boundary cohesion and retard capillary driven grain coarsening, thereby qualifying boron-induced grain boundary engineering as an ideal strategy for the development of advanced HEAs.

We made an approach to utilizing a hierarchical microstructure design to improve the mechanical properties of an interstitial carbon doped high-entropy alloy (HEA) by cold rolling and subsequent tempering and annealing. Bimodal microstructures were produced in the tempered specimens consisting of nano-grains (~50 nm) in the vicinity of shear bands and recovered parent grains (10-35 um) with pre-existing nano-twins. Upon annealing, partial recrystallization led to trimodal microstructures characterized by small recrystallized grains (<1 um) associated with shear bands, medium-sized grains (1-6 um) recrystallized through subgrain rotation or coalescence of parent grains and retained large unrecrystallized grains. To reveal the influence of these hierarchical microstructures on the strength-ductility synergy, the underlying deformation mechanisms and the resultant strain hardening were investigated. A superior yield strength of 1.3 GPa was achieved in the bimodal microstructure, more than
two times higher than that of the fully recrystallized microstructure, owing to the presence of nano-sized grains and nano-twins. The ductility was dramatically improved from 14% to 60% in the trimodal structure compared to the bimodal structure due to the appearance of a multi-stage work hardening
behavior. This important strain hardening sequence was attributed to the sequential activation of transformation-induced plasticity (TRIP) and twinning-induced plasticity (TWIP) effects as a result of the wide variation in phase stability promoted by the grain size hierarchy. These findings open a broader
window for achieving a wide spectrum of mechanical properties for HEAs, making better use of not only compositional variations but also microstructure and phase stability tuning. 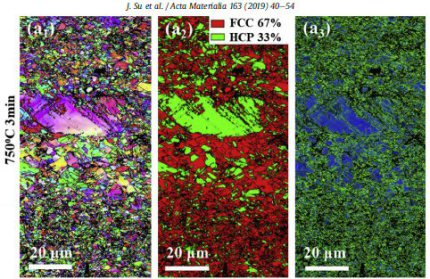