Structural defects such as interfaces or dislocations in crystalline solid solutions are disturbed regions and attract solute segregation when diffusion is enabled. According to the Gibbs isotherm the driving force is the reduction of the system’s energy. Extending this concept also to non-isostructural cases suggests that local structural transformations can occur if the chemical composition and stress at a defect reach a level sufficient for stabilizing a state different from the matrix. The concept of interface complexions extends the classical isotherm to interface-stabilized states which have a different structure and composition than the matrix and remain confined in the region where they form. We observed such a phenomenon also at linear defects, i.e. edge dislocations, in a binary Fe-9at%Mn model alloy where a stable face centered cubic (fcc, austenitic) confined structure forms in an otherwise body centered cubic (bcc, martensitic) crystal. This is a phenomenological 1-D analog of the previously observed complexions that were observed at planar defects. 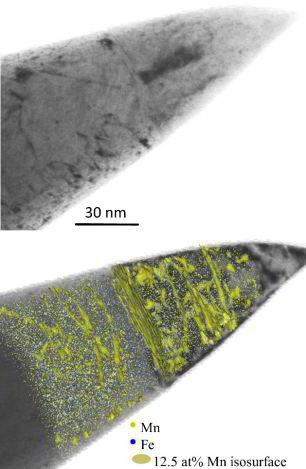 We homogenized the Fe-9at%Mn alloy at 1100°C, then quenched and cold rolled it to 50% reduction for increasing the dislocation density. Subsequent annealing at (i) 400°C, 336 hours (2 weeks); (ii) 450°C, 6 hours, 18 hours and 336 hours; and (iii) 540°C, 6 hours enabled Mn diffusion (18). To characterize structure and composition at the same positions, we conducted correlative STEM-APT analysis (STEM: scanning transmission electron microscopy, APT: atom probe tomography) (19-22). We identified structural defects using STEM and cross-correlated it with solute decoration observed by APT (Fig. 1). Two grain boundaries and a single dislocation line are highlighted by blue arrows in the STEM micrograph and in the 3D atom map where they are visible as Mn-enriched regions. The correlative STEM experiments clearly identify the linear Mn-enriched features in the APT volumes as dislocations. As evident from the STEM micrograph not all dislocations attract solute segregation high enough to be detectable by APT (red arrow 1).

We obtained 1-D compositional profiles along cylindrical regions with 1 nm diameter at individual locations (Fig. 1E). Profile #1 shows a concentration of 25±2 at% Mn at the dislocation core, which corresponds to an enrichment factor of 2.7 compared to the matrix concentration of Mn (9.1 at%). The average thickness of the Mn-enriched zone is about 1 nm. Besides the high Mn content at the dislocation cores, the composition along the dislocation line (profile #2) reveals periodic Mn changes, i.e. enriched and depleted zones alternating with a spacing of ~5 nm, resembling a nano-sized pearl necklace.

Sufficient segregation in conjunction with local elastic distortion at the defect may promote confined phase transformation. This phenomenon has been observed at grain boundaries in Fe-Mn alloys and was explained in terms of a conventional phase transformation model (6,7). The huge segregation level observed here at some of the dislocations reveals similar features, reaching up to 25at% Mn. This is in excellent agreement with the equilibrium concentration of Mn in the face centered cubic (fcc) phase (austenite) in the binary Fe-Mn system at the given annealing temperature (450°C), indicating austenite formation at the dislocations. We conducted experiments on three samples, exposed to different annealing temperatures (400°C, 450°C, 540°C), to study this further. We quantified the average compositional profiles around all probed dislocations observed in all individual APT datasets using proximity histograms (‘proxigrams’) ((23), Fig. 2). For all temperatures we found an excellent agreement of the thermodynamically predicted equilibrium Mn concentrations (18) in austenite for this phase at the respective temperatures (dashed lines) with the experimentally observed local chemical compositions within 0.5-1 nm distance from the dislocation core.

As a third approach to prove that the dislocation cores undergo confined transformation from bcc to fcc, we performed TEM (transmission electron microscopy) to reveal the local crystallographic structures at the Mn-enriched dislocation sections. The investigations were done on martensite grains tilted a few degrees away from the [001] zone axis. Due to the small volume of the Mn-enriched dislocation core regions with respect to the surrounding matrix no fcc reflections are visible in the diffraction patterns (Fig. 3A). Nevertheless, the measured area contains fcc phase that fulfills a Kurdjumov-Sachs (K-S) or Nishiyama-Wassermann (N-W) orientation relationship with the parent bcc grain as we demonstrate by dark-field imaging. Fig. 3A shows the diffraction pattern taken from a region containing a small angle grain boundary (Fig. 3B). The diffraction pattern is indexed as [001]bcc, the positions of the fcc diffraction spots for a N-W orientation relationship are also plotted into the same image. Austenite with a K-S orientation relationship is rotated by 5.26° around [011]bcc and the corresponding reflections are within the yellow circle in Fig. 3A. For better clarity only one N-W fcc variant is shown, but the symmetric relationship applies for all possible variants. The bright-field TEM micrographs (Fig. 3B) show a mixed-type small angle grain boundary containing edge and screw dislocations. When performing dark-field imaging using the yellow region in Fig 3A only the edge dislocations produce contrast. As clearly visible from the diffraction pattern (Fig 3A), bcc dislocations would not give contrast under these darkfield diffraction conditions. These TEM results are a direct proof of the presence of a confined zone with fcc structure having a K-S or N-S orientation relationship with respect to the martensitic matrix at edge dislocations.

Although the experiments above substantiate the nucleation of austenite zones at the edge dislocation cores, to our surprise, we did not detect any further growth of these regions into the martensite matrix even during extended annealing treatments (18). In classical nucleation theory, a newly formed phase will grow once it has overcome the nucleation barrier. However, the analysis of samples annealed even for 2 weeks (336 h) at 450°C revealed no change in size or composition of the austenitic regions at dislocations as compared to the samples annealed for 6 h at 450°C (18). This result indicates that the critical radius for an austenite nucleus which is also viable outside of the dislocation core region has not been reached, hence matching the confinement characteristic of a complexion.

We further analyze this phenomenon by a thermodynamic nucleation model. We considered two cases: (i) an incoherent fcc (austenite) - bcc (martensite) interface formed by nucleation (diffusive transformation) and (ii) a coherent interface formed by an athermal reversed Bain transformation from bcc to fcc (displacive transformation) (24). For the second case, the newly formed fcc nucleus (austenite) should hold an orientation relationship, for which the maximum misfit direction is nearly parallel to the Burgers vector of the dislocation (25,26). For the case of the incoherent fcc-bcc interface we use Cahn’s nucleation model (27), considering the removal of the dislocation’s strain energy; the formation of a new incoherent interface; and a free energy term associated with the phase transformation. For the special case of a coherent, athermal nucleation an additional energy penalty term for the misfit distortion associated with the reverse transformation was added (24). Including these contributions we calculated the free energy per unit length of a cylinder surrounding an infinite straight dislocation:

For the case of a displacive confined transformation at a dislocation in conjunction with a coherent fcc-bcc low energy interface the energy balance reaches a steep local minimum at an austenite size of ~0.4nm. We interpret this as a subcritical metastable cylinder of the newly formed confined transformation zone. Upon further growth, the dislocation strain energy and the transformation free energy are not able to compensate the interface and distortion energy contributions. Therefore, the growth of the austenite nucleus is impeded and the critical radius of a viable nucleus is not reached. In the absence of a dislocation no nucleation is possible under any of these constraints.

The colored curves indicate solutions for a diffusive transformation in conjunction with an incoherent interface using different fcc-bcc interface energies. The results for an interface energy >1 J/m2 suggest a somewhat larger subcritical austenite nucleus, i.e. both types of scenarios could in principal explain our observations (Fig. 4). The remaining activation barrier for a subcritical nucleus to be turned into a critical one is very small for the diffusive cases or – for interface energies <1 J/m2 – even absent. In such cases a spontaneous (i.e. pseudo-spinodal) phase transition would occur (30). The coherency between the two regions and the fact that the new fcc zone we observed at the dislocations remains confined inside the dislocation core region without any temporal changes in size or composition (18) is the reason why we employ the term linear complexions and favor the explanation of a displacive confined phase transformation from bcc into fcc. However, one should note that both, (i) the initial segregation stage before transformation, and (ii) the subsequent Mn partitioning after transformation are diffusive processes.

Another interesting observation is that the segregation of Mn forms alternating regions of high and low Mn concentration along a dislocation line (Fig. 1E). We attribute this necklace-like arrangement of transformation zones to the constraint that a dislocation has no stress component along its line vector. When displacive austenite forms, it creates local tensile stresses around it owing to its reduced volume so that shape undulations may follow the trend to minimize elastic distortion.

Our results confirm confined austenitic regions at martensitic dislocation cores. The observations rest on atomic scale structural and chemical analysis, thermodynamic calculations and an analytical model which accounts for the free energy gain obtained when replacing the dislocation core by an undistorted new spatially confined transformation zone. We suggest extending the recently introduced planar complexion concept phenomenologically to the linear case. The effect observed fulfills all characteristics of a linear complexion (8), namely, defect stabilization, geometrical confinement to the defect region, individual structural and compositional state, as well as dimensional and compositional stability. The thermodynamic driving forces for the formation of planar and linear complexions may be different though owing to the associated differences in structure and distortion of the underlying lattice defects. The discovery of linear complexions provides opportunities to nanostructure alloys via targeted segregation and confined phase transformation of dislocations.

Table 1: Chemical composition of the bulk alloy in wt% according to wet-chemical analysis.

The most efficient way to tune microstructures and mechanical properties of metallic alloys lies in designing and using athermal phase transformations. Examples are shape memory alloys and high strength steels, which together stand for 1,500 million tons annual production. In these materials, martensite formation and mechanical twinning are tuned via composition adjustment for realizing complex microstructures and beneficial mechanical properties. Here
we report a new phase transformation that has the potential to widen the application window of Ti alloys, the most important structural material in aerospace design, by nanostructuring them via complexion-mediated transformation. This is a reversible martensitic transformation mechanism that leads to a final nanolaminate structure of a'' (orthorhombic) martensite
bounded with planar complexions of athermal omega (alha–omega, hexagonal). Both phases are crystallographically related to the parent beta (BCC) matrix. As expected from a planar complexion, the alpha–omega is stable only at the hetero-interface.

Phase nucleation through confined spinodal fluctuations at crystal defects evidenced in Fe-Mn alloys
Analysis and design of materials and fluids requires understanding of the fundamental
relationships between structure, composition, and properties. Dislocations and grain
boundaries influence microstructure evolution through the enhancement of diffusion and by facilitating heterogeneous nucleation, where atoms must overcome a potential barrier to enable the early stage of formation of a phase. Adsorption and spinodal decomposition are known precursor states to nucleation and phase transition; however, nucleation remains the less well-understood step in the complete thermodynamic sequence that shapes a microstructure. Here, we report near-atomic-scale observations of a phase transition mechanism that consists in solute adsorption to crystalline defects followed by linear and planar spinodal
Silva_et_al-2018-Nature_Communications S[...]
PDF-Dokument [2.7 MB]