Many different types of steels consist of micro- or nanoscale laminate microstructures.
A typical example are pearlitic steels which consist of a lamellar structure of alternating iron and iron carbide (cementite) layers.
Cementite is an iron carbide with Fe3C stoichiometry and orthorhombic crystal structure. The eutectoid concentration of the alloy lies at the eutectoid temperature-composition intersection where the austenite phase transforms directly into a layered ferrite-cementite solid. This is referred to as a pearlitic reaction.

Upon heavy deformation this laminate microstructure undergoes substantial refinement down to the nanometre scale.
Upon further large straining the carbide phase dissolves via mechanical alloying, rendering the initially two-phase pearlite structure into a carbon-supersaturated iron phase.

Another case where laminate steels have been designed are martensite reversion steels. In these materials the alloy is first rendered austenitic and then quenched into the martensitic state. After that the so quenched material is subjected to a martensite-to-austenite reversion heat treatment.
This works by annealing the martensite into a temperature regime where local austenite formation can occur, either at segregation decorated defects for instance at grain (lath) boundaries.
Since many types of martensite steels can contain very fine lath grain boundary structures such a reversion heat treatment can be used to create very fine damask-type nanlaminate microstructures leading to steels with superior mechanical properties for instance when subjected to fatigue loading scenarios.
Below are some more specific examples for such nano-laminate steels.

Analysis and design of materials and fluids requires understanding of the fundamental relationships between structure, composition, and properties. Dislocations and grain boundaries influence microstructure evolution through the enhancement of diffusion and by facilitating heterogeneous nucleation, where atoms must overcome a potential barrier to enable the early stage of formation of a phase. Adsorption and spinodal decomposition are known precursor states to nucleation and phase transition; however, nucleation remains the less well-understood step in the complete thermodynamic sequence that shapes a
microstructure. Here, we report near-atomic-scale observations of a phase transition mechanism that consists in solute adsorption to crystalline defects followed by linear and planar spinodal fluctuations in an Fe-Mn model alloy. These fluctuations provide a pathway for austenite nucleation due to the higher driving force for phase transition in the solute-rich regions. Our observations are supported by thermodynamic calculations, which predict the possibility of spinodal decomposition due to magnetic ordering.

Nanolaminate Steels based on Pearlite

Pearlitic steel can exhibit tensile strengths above 7 GPa after severe plastic deformation, where the deformation promotes a refinement of the lamellar structure and cementite decomposition.

With is they are the strongest formable bulk metallic alloys.

A clear correlation between deformation and cementite decomposition in pearlite is still absent. In our recent works, a local electrode atom probe was used to characterize the microstructural evolution of pearlitic steel, cold-drawn with progressive strains up to 5.4. Transmission electron microscopy was also employed to perform complementary analyses of the microstructure. Both methods yielded consistent results. The overall carbon content in the detected
volumes as well as the carbon concentrations in ferrite and cementite were measured by atom probe. In addition, the thickness of the cementite filaments was determined. In ferrite, we found a correlation of carbon concentration with the strain, and in cementite, we found a correlation of carbon concentration with the lamella thickness. Direct evidence for the formation of cell/subgrain boundaries in ferrite and segregation of carbon atoms at these defects was found. Based on these findings, the mechanisms of cementite decomposition
are discussed in terms of carbon–dislocation interaction. 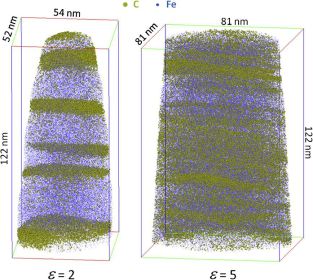 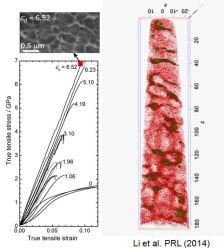 Steels containing reverted nanoscale austenite laminate regions or reverted austenite islands or films dispersed in a martensitic matrix show excellent strength, ductility and toughness. They can be synthesized by a simple reversion heat treatment of as-quenched martensite to bring the material locally into the two-phase austenite-martensite region. 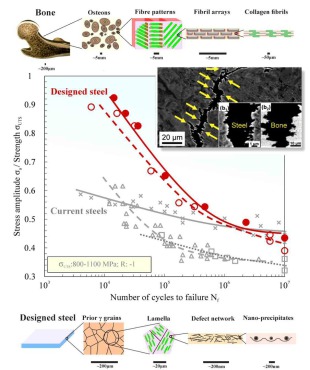