In constitutive modeling in materials science we refer to such variables as internal variables which have microstructural meaning such as lattice defect densities.

In the case of plasticity the most important microstructural state variable certainly is the dislocation density as dislocations are the elementary carriers of plastic deformation.

Models that treat the evolution of dislocation densities and calculate the flow stress from them have been proposed by various authors as outlined in the following:

A detailed review of dislocation density based crystal plasticity models has been provided by Roters et al. (2010). While most of these modeling approaches are phenomenological, i.e. some of these use the dislocation density as power law dependent variable (e.g. Lim et al. (2011)), other approaches include them as self sustained geometric loops (e.g. Arsenlis and Parks (2002)).

The dislocation density based approach in the context of crystal plasticity finite element modeling is employed not only for understanding single crystal behavior but also for simulations of polycrystal plasticity, e.g. by Austin and McDowell (2011), Erieau and Rey (2004) and Lim et al. (2011). However, when studying macroscopic plastic anisotropy in metal forming processes, most finite element (FE) approaches use viscoplastic crystal plasticity or even Taylor-based homogenization approximations rather than internal variable dislocation based constitutive laws.

Some of the approaches currently in use or under further development are presented below:

A dislocation density based constitutive model for face-centred cubic crystals is introduced and implemented into a crystal plasticity finite element framework. The approach assumes a homogeneous dislocation structure and tracks the dislocation evolution on each slip system. In addition to the statistically stored dislocations, the geometrically necessary dislocation density is introduced in order to consider strain gradients and thus render the model size sensitive. Furthermore, we develop a consistent algorithm for the updating of the
geometrically necessary dislocation density. A simple shear experiment of an aluminium single crystal is used to calibrate the material parameters of the model and demonstrate its size sensitivity. 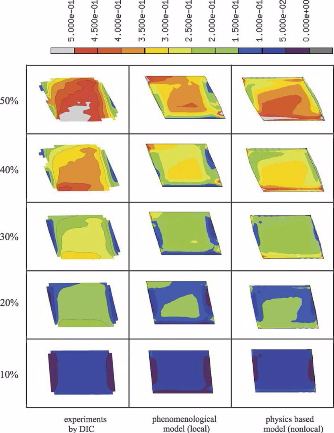 This article reviews continuum-based variational formulations for describing the elastic–plastic deformation of anisotropic heterogeneous crystalline matter. These approaches, commonly referred to as crystal plasticity finite-element models, are important both for basic microstructure-based mechanical predictions as well as for engineering design and performance simulations involving anisotropic media. Besides the discussion of the constitutive laws, kinematics, homogenization schemes and multiscale approaches behind these methods, we also present some examples, including, in particular, comparisons of the predictions with experiments. The applications stem from such diverse fields as orientation stability, microbeam bending, single-crystal and bicrystal deformation, nanoindentation, recrystallization, multiphase steel (TRIP) deformation, and damage prediction for the microscopic and mesoscopic scales and multiscale predictions of rolling textures, cup drawing, Lankfort (r) values and stamping simulations for the macroscopic scale.

In this work we suggest a dislocation based constitutive model to incorporate the mechanical interaction between mobile dislocations and grain boundaries into a crystal plasticity finite element framework. The approach is based on the introduction of an additional activation energy into the rate equation for mobile dislocations in the vicinity of grain boundaries. The energy barrier is derived by using a geometrical model for thermally activated dislocation penetration events through grain boundaries. The model takes full account of the geometry of the grain boundaries and of the Schmid factors of the critically stressed incoming and outgoing slip systems and is formulated as a vectorial conservation law. The new model is applied to the case of 50% (frictionless) simple shear deformation of Al bicrystals with either a small, medium, or large angle grain boundary parallel to the shear plane. The simulations are in excellent agreement with the experiments in terms of the von Mises equivalent strain distributions and textures. The study reveals that the incorporation of the misorientation alone is not sufficient to describe the influence of grain boundaries on polycrystal micro-mechanics. We observe three mechanisms which jointly entail pronounced local hardening in front of grain boundaries (and other interfaces) beyond the classical kinematic hardening effect which is automatically included in all crystal plasticity finite element models owing to the change in the Schmid factor across grain boundaries. These are the accumulation of geometrically necessary dislocations (dynamic effect; see [Ma A, Roters F, Raabe D. A dislocation density based constitutive model for crystal plasticity FEM including geometrically necessary dislocations. Acta Mater 2006;58:2169–79]), the resistance against slip penetration (dynamic effect; this paper), and the change in the orientation spread
(kinematic effect; this paper) in the vicinity of grain boundaries. 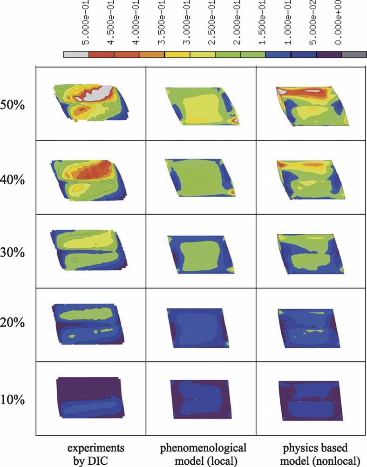 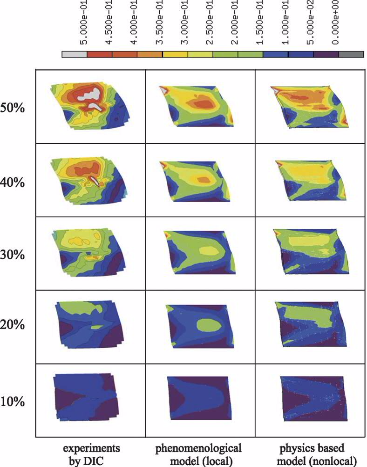 Here we present a single crystal plasticity model based on edge and screw dislocation densities for body centered cubic (bcc) crystals. In a bcc crystal screw dislocations experience high lattice friction due to their non-planar core. Hence, they have much slower velocity compared to edge dislocations. This phenomenon is modeled by accounting for the motion of screw dislocations via nucleation and expansion of kink-pairs. The model, embedded as a constitutive law into a crystal plasticity framework, is able to predict the crystallographic
texture of a bcc polycrystal subjected to 70%, 80% and 90% thickness reduction. We perform a parametric study based on the velocities of edge and screw dislocations to analyze the effect on plastic anisotropy of electro-deposited pure iron with long needle-shaped grains having sharp crystallographic <111>//ND texture (ND: normal direction). The model shows a large change in the r-value (Lankford value, planar anisotropy ratio) for pure iron when the texture changes from random to <111>//ND. For different simulated cases where the crystallites have an orientation deviation of 1°, 3° and 5°, respectively, from the ideal
<111>//ND axis, the simulations predict r-values between 4.0 and 7.0 which is in excellent agreement with data observed in experiments by Yoshinaga et al. (ISIJ Intern., 48 (2008) 667–670). For these specific orientations of grains, we also model the effect of long needle shaped grains via a procedure that excludes dislocation annihilation.

A new constitutive plasticity model for prismatic slip in hexagonal a-titanium is developed. In the concept pure edge and screw dislocation densities evolve on the {1010} <1210> slip systems. The model considers that the screw dislocation segments have a spread out core, leading to a much higher velocity of edge compared with screw dislocations. This enables the model to describe the observed transition in strain hardening from stage I to stage II in single crystals oriented for prismatic slip. Good agreement is found between the experimentally observed and simulated stress–strain behavior. 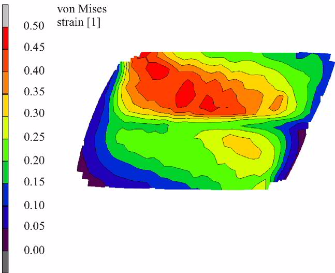 A dislocation density based constitutive model for the face centered cubic crystal structure has been implemented into a crystal-plasticity finite element framework and extended to consider the mechanical interaction between mobile dislocations and grain boundaries by the authors [Ma, A., Roters, F., Raabe, D., 2006a. A dislocation density based constitutive model for crystal-plasticity FEM including geometrically necessary dislocations. Acta Materialia 54, 2169–2179; Ma, A., Roters, F., Raabe, D., 2006b. On the consideration of interactions between dislocations and grain boundaries in crystal plasticity finite element modeling – theory, experiments, and simulations. Acta Materialia 54, 2181–2194]. The approach to model the grain boundary resistance against slip is based on the introduction of an additional activation energy into the rate equation for mobile dislocations in the vicinity of internal interfaces. This energy barrier is derived from the assumption of thermally activated dislocation penetration events through grain boundaries. The model takes full account of the geometry of the grain boundaries and of the Schmid factors of the critically stressed incoming and outgoing slip systems. In this study we focus on the influence of the one remaining model parameter which can be used to scale the obstacle strength of the grain boundary. 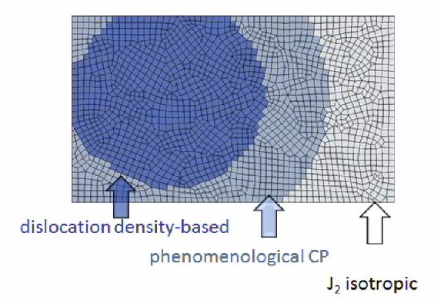 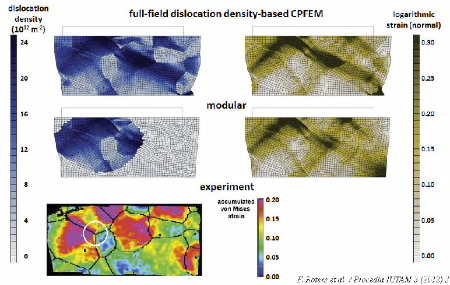 The solution of a continuum mechanical boundary value problem requires a constitutive response that connects deformation and stress at each material point. Such connection can be regarded as three separate hierarchical problems.
At the top-most level, partitioning of the (mean) boundary values of the material point among its microstructural constituents and the associated homogenization of their response is required, provided there is more than one constituent
present. Second, based on an elastoplastic decomposition of (finite strain) deformation, these responses follow from explicit or implicit time integration of the plastic deformation rate per constituent. Third, to establish the latter, a state
variable-based constitutive law needs to be interrogated and its state updated.
The Düsseldorf Advanced MAterial Simulation Kit (DAMASK) reflects this hierarchy as it is built in a strictly modular way. This modular structure makes it easy to add additional constitutive models as well as homogenization
schemes. Moreover it interfaces with a number of FE solvers as well as a spectral solver using an FFT. We demonstrate the versatility of such a modular framework by considering three scenarios: Selective refinement of the constitutive material description within a single geometry, component-scale forming simulations comparing different homogenization schemes, and comparison of representative volume element simulations based on the FEM and the spectral solver.

Understanding and improving the mechanical properties of tungsten is a critical task for the materials fusion energy program. The plastic behavior in body-centered cubic (bcc) metals like tungsten is governed primarily by screw dislocations on the atomic scale and by ensembles and interactions of dislocations at larger scales. Modeling this behavior requires the application of methods capable of resolving each relevant scale. At the small scale, atomistic
methods are used to study single dislocation properties, while at the coarse-scale, continuum models are used to cover the interactions between dislocations. In this work we present a multiscale model that comprises atomistic, kinetic Monte Carlo (kMC) and continuum-level crystal plasticity (CP) calculations. The function relating dislocation velocity to applied stress
and temperature is obtained from the kMC model and it is used as the main source of constitutive information into a dislocation-based CP framework. The complete model is used to perform material point simulations of single-crystal tungsten strength. We explore the entire crystallographic orientation space of the standard triangle. Non-Schmid effects are inlcuded
in the model by considering the twinning-antitwinning (T/AT) asymmetry in the kMC calculations. We consider the importance of 1 1 1{1 1 0} and 1 1 1{1 1 2} slip systems in the homologous temperature range from 0.08Tm to 0.33Tm, where Tm=3680 K is the melting point in tungsten.

The original full paper is here.