When a homogeneous, single-phase, binary solution is rapidly quenched from a sufficiently elevated homologous temperature to a temperature below its upper critical solution temperature, gradual phase separation may occur. However, phase transition will only happen if the quench brings the solution into the two-phase coexistence region and if the temperature suffices for diffusion. Phase separation may proceed through the discontinuous process of nucleation and growth in the metastable region, or by the continuous process of spinodal decomposition in the unstable region (Cahn and Hilliard 1971; Wagner and Kampmann 1991). While small concentration fluctuations in the metastable region increase the total free energy of the system in terms of the nucleation energy, a sufficiently large but finite concentration (concentration in the precipitate) perturbation can degrade it. This renders the entire solid solution unstable and leads to phase separation by discontinuous nucleation and subsequent growth. In contrast, continuous phase separation, as described by spinodal decomposition, gradually degrades the free energy right from the beginning of phase transition, i.e. it is a non-activated process and does not reveal any threshold energy. Such coherent, i.e. isostructural, decomposition phenomena are theoretically described by the Cahn–Hilliard model (1958), which combines the generalized law of diffusion with a Landau energy term.  The extension of the original Cahn–Hilliard model to non-coherent phase transformations, i.e. transitions which change the long-range order, the crystal orientation, or the crystal structure, is provided by the Allen–Cahn model (1979) and its generalized derivatives. While the Cahn–Hilliard model describes the kinetics of transformation phenomena with conserved field variables (e.g. chemical concentration), the Allen–Cahn model describes transformations with nonconserved variables (e.g. long-range order). The Ginzburg–Landau and Cahn–Hilliard-type kinetic phase field models represent a group of very general and flexible phenomenological continuum field approaches which are capable of describing continuous and quasi-discontinuous phase separation phenomena in coherent and incoherent systems at the nanoscopic and mesoscopic level. While original versions of the Ginzburg–Landau approach addressed electromagnetic problems with nonconserved field variables, such as phase separation phenomena in Shubnikov phases, i.e. the concentration distribution of Cooper pairs, advanced metallurgical variants are capable of addressing the distribution of conserved continuous atomic concentration parameters and nonconserved quasi-discontinuous structural and/or orientational parameters in coherent and non-coherent systems. Phase field models can be regarded as a set of Onsager kinetic equations furnished with an appropriate free energy functional that may depend on such quantities as atomic or boson concentration and long-range order. For transcribing this approach into a form that is discrete in space, these state parameters are used as field variables. The dependence of the variables on the spatial coordinates enables one to prescribe heterogeneous composition and structure fields, and allows one to simulate both the kinetics and the resulting morphology of phase separation phenomena. Phase field approaches are generally based on the assumption that the material is homogeneous and that the chemical portion of the total free energy density functional can be expressed in a Landau form. In those versions where only the conservative concentration field is considered (original Cahn–Hilliard theory), the phase field method is confined to describing isostructural phase transformations. The phases may then differ from each other only in concentration, but not in long-range order or crystal structure. For incorporating the latter parameters, the theory can be extended by introducing additional, nonconservative field variables (Allen–Cahn theory) and by complementing the energy density functional with corresponding terms. ﻿ 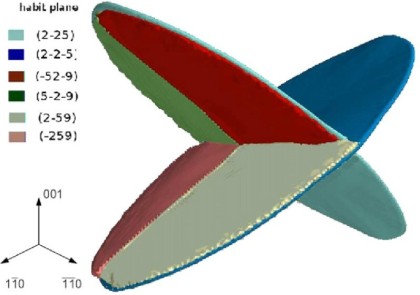