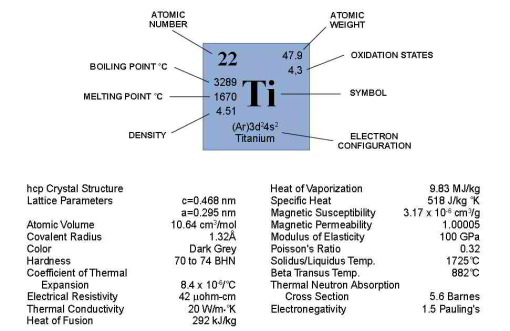 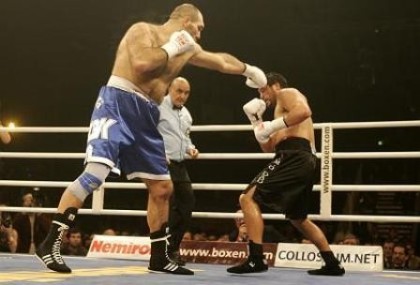 There are always good reasons for the right implant material 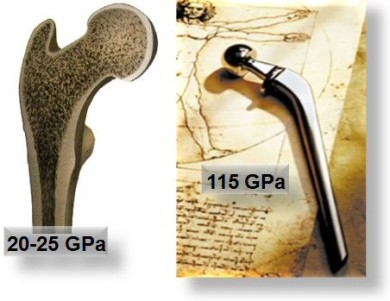 Titanium offers a unique property spectrum owing to the combination of high strength, stiffness, toughness, low density, and good corrosion resistance as provided by various titanium alloys at very low to elevated temperatures. This spectrum enables weight savings in multiple key aerospace applications and other high-performance applications in the chemcial and car industry.

Titanium is a low-mass-density element that can be strengthened by solute alloying, second phase hardening, and plastic deformation.

Titanium can be passivated, and thereby its alloys exhibit a high degree of immunity to attack by most mineral acids and chlorides. Titanium is nontoxic and generally biologically compatible with human tissues, minerals and bones. The excellent corrosion resistance and biocompatibility coupled with excellent strength make titanium and its alloys useful in chemical and petrochemical applications, marine environments, and biomaterial applications.

For pure Ti the low temperature phase (α -Ti) is a near hexagonal closed packed (HCP) crystal structure which undergoes an allotropic transformation at 882°C to the high temperature phase ( β-Ti) with body centered cubic (BCC) crystal structure. Ti-alloys are hence classified into three types, namely, α﻿-alloys, β -alloys and α -﻿ β -alloys. These alloys are stabilized by solute elements that have strong effect on the transformation temperature. Elements increasing the transformation temperature are referred to as α -stabilizers, while elements that decrease it, thereby increasing the β- phase region, are referred as the β -stabilizers. The most common α -stabilizers are Al, O, C and N, whereas many heavy and high melting transition elements such as particularly Fe, Cr, Nb, Mo, Ta, V, and W are β ﻿-stabilizers. For β -stabilizers, a minimum concentration β is required to fully stabilize the β ﻿-phase following a quench from the high temperature. ﻿

Reprints on this topic 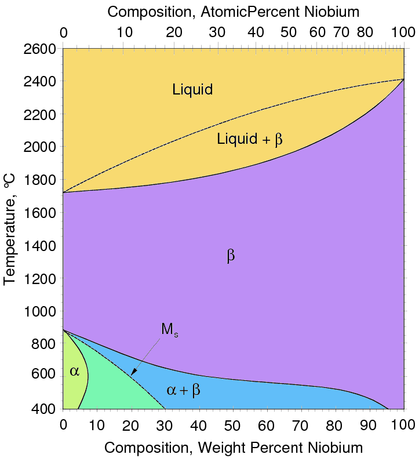 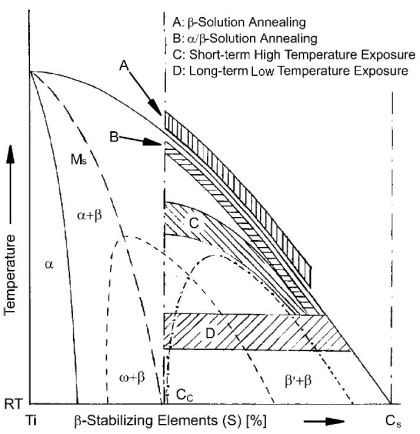 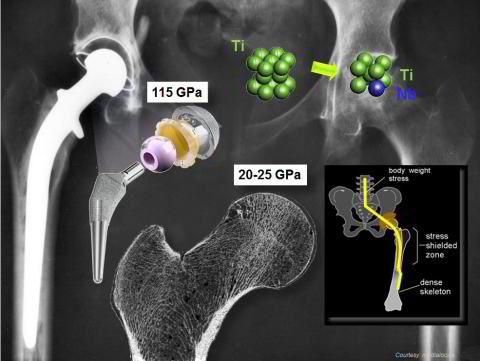 Commonly, Ti and Ti-base alloys occur in one or a mixture of two basic crystalline structures: the alpha-phase and the beta-phase, which assume a hexagonal (hex) and a body-centered cubic (bcc) structure, respectively. Thus, three general
classes of Ti-base alloys are defined: alpha, alpha–beta and beta. The transition temperature from the alpha- to the beta-phase is about 882 degress C for pure Ti.

Recent studies have revealed that a compromise along the biomedical constraints mentioned above can be obtained by designing Ti alloys which use the most biocompatible elements, i.e. Ta, Mo, Nb and Zr, as alloy ingredients for stabilizing the bcc beta-phase. Experimental investigations on such alloy variants have shown that these materials can indeed match most of the desired

properties outlined above, i.e. they do not reveal any toxicity vs. osteoblastic cells, have a high corrosion resistance, and show good mechanical properties owing to solid solution and particle strengthening while preserving the light weight character of Ti. An attractive feature of beta Ti alloys is their low elastic modulus,
which is below that of the conventional alpha or alpha–beta Ti alloys commonly used for biomedical applications.

This latter property is of particular relevance because an important requirement of bone-replacing implants is a low elastic stiffness approximating as far as possible that of the surrounding bone tissue. The background of this aspect is the stress shielding effect: bone is a living material which is subject to mechanical loads resulting from the weight it carries and the motion it creates. When an elastically much stiffer surgical implant part replaces a portion of the human skeleton, it takes over a considerable part of that mechanical load, thereby shielding the remaining bone that surrounds and abuts the implant. Reducing the physiological loads on the bone entails resorption mechanisms which lead to a drop in bone density, mineralization state, strength and health. The mechanical system bone–implant undergoes three main effects upon stress shielding: first, osteoporosis associated with underutilization that characterizes tissue resorption subsequent to the absence or the decrease in local physiological mechanical stress. Second, tissue resorption increases the danger of formation and migration of wear debris at the bone–implant interface via biological fluid transport. Third, the stiffness gap between bone and material gives rise to micro-motions at the bone–implant interface. Owing to this context, the stress shielding and the described effects associated with it create multiple undesired phenomena at the bone–implant system and may finally lead to contact loosening, premature implant failure or debris-induced infections.
This phenomenon explains that in the design of Ti alloys for biomedical applications the reduction of the elastic stiffness must be regarded as a high priority constraint in the overall strategy. The major challenge associated with
this point is documented by the fact that commercial pure Ti and alpha–beta type Ti–6 wt.% Al–4 wt.% V alloys, which are currently widely used as structural biomaterials for the replacement of hard tissues in artificial joints, have an elastic
modulus of 105–110 GPa while human cortical bone has a stiffness of about 20 GPa.

New alloys which are dominated by a large amount of stable beta-phase reveal a significant drop in the elastic modulus to values as small as 65 GPa. It is, therefore, likely that the next generation of structural materials for replacing hard human tissue will be of this type. Another reason to develop a new generation of alloys is that conventional two phase alpha–beta variants such as Ti–6 wt.% Al–4 wt.% V contain both vanadium, a cytotoxic element, and aluminum,an element suspected of causing neurological disorders.﻿ 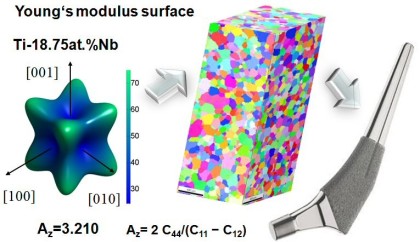 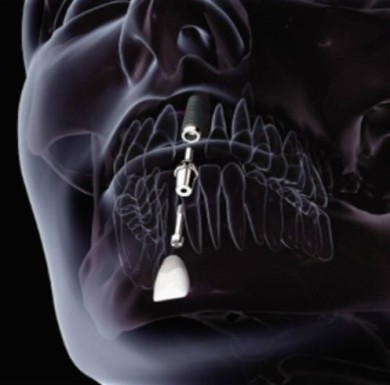 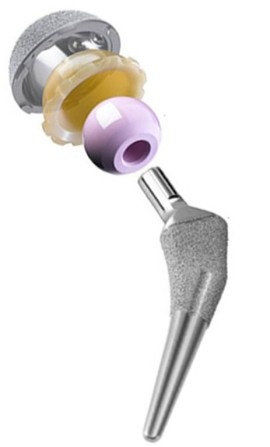 Design of BCC beta-titanium alloys as biomaterials based on first principles calculations
This study presents a new strategy for the theory-guided bottom up design of beta-Ti alloys for biomedical applications using a
quantum mechanical approach in conjunction with experiments. Parameter-f
Acta Materialia 55 (2007) 4475–4487 ab i[...]
PDF-Dokument [1.9 MB]

Anodic oxides on a beta type Nb–Ti alloy and their characterization by electrochemical impedance spectroscopy
Anodic oxides were grown on the surface of an electropolished (Ti–30 at% Nb) beta-titanium (b-Ti) alloy by cyclic voltammetry.
The scan rate was 100mVs1 between 0 and 8V in
increments of lVin an ace
A72 - Phys Status Solidi A 207 (2010) 81[...]
PDF-Dokument [2.8 MB] 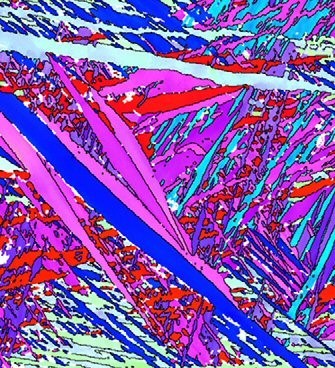