Basic phenomena, mechanisms and terminology in recrystallization and grain growth

In engineering processing terms severe plastic cold working is typically carried out for permanently changing the shape of a metallic work piece. In physical metallurgy terms cold deformation leads to the increase of the internal stored defect energy. This increase in the stored energy is microstructurally associated with the accumulation of lattice defects. More specific, the majority of the internal energy that is stored due to cold working of metals can be attributed to dislocations. Point defects such as vacancies and interstitials as well as interfaces arising from athermal processes such as deformation twinning or martensite formation contribute only a minor portion to the stored energy.

During plastic straining only a relatively small fraction of the total deformation energy imposed through the tool actually remains stored in the material. The main part of this energy is dissipated as heat during the cold working.  This is also the reason why heavily cold worked metallic alloys can become very hot upon cold working with up to several 100 K of temperature increase when strained at high rates. Yet, the defect density that remains stored in heavily cold worked metals is still high enough to serve as driving force for a number of non-equilibrium transformation phenomena which are usually summarized as recovery, recrystallization and grain coarsening.

Typically, for these processes to occur, the total amount of cold working has to be above a certain critical threshold value, namely, typically 30-50% thickness reduction or above.

For many metals and alloys, the dislocation density increases from values of 10^10 -  10^11 /m^2 in the annealed state to 10^12 -  10^13 /m^2 after modest deformation and even up to 10^16 /m^2 after very heavy deformation at low temperatures.  When translating these values into an average spacing among the dislocations we obtain 1µm for weakly deformed materials and 10 nm for heavily deformed metals.
These high lattice defect densities lead to changes in a number of properties, such as the electrical resistivity, hardness, strength, toughness, and ductility with the amount of cold working. Also, the corrosion behavior is changed since the potential changes around dislocations render deformed zones better attacking points to oxidation phenomena.
At the light optical scale, i.e. at a mesoscopic observation regime, the grains become elongated along the direction of cold working and their shapes are distorted. Often shear bands, which are oblique mesoscopic inhomogeneities of high local deformation, appear at higher stages of the plastic deformation. At an electron optical scale complex dislocation cell arrangements and twinning substructures evolve. The latter microstructure features are an essential characteristic when the stacking fault energy is low (of the order of 20-40 mJ/m2). For materials with yet lower stacking fault energy deformation-induced martensitic transformations can take place. This is for instance the case for Cu-30wt.%Zn brass, many highly alloyed austenitic Cr-Ni stainless steels and high-Mn containing TWIP and TRIP steels (TWIP: twinning induced plasticity; TRIP: transformation induced plasticity).

For the further downstream manufacturing of heavily cold worked metals the high strength and hardness, that are also associated with a drop in ductility and toughness, typically requires to first restore the original soft state of the material.

In that context, recovery, recrystallisation, and competitive grain coarsening (also referred to as grain growth) are the most important and effective thermomechanical processing methods to render cold worked metallic materials back into a softer and hence easily formable state with a reformed grain and defect structure. Correspondingly, the microstructure as well as the mechanical and electrical properties of the crystalline materials observed after heavy plastic deformation can be restored back into their original states before conducting further manufacturing steps.

Static primary recrystallization starts when heating deformed metals to an elevated temperature. In practical terms this usually means holding the cold deformed materials at a temperature above about 1/3 of their respective absolute melting point for a certain period of time, typically 1 hour.  Higher recrystallization temperatures require in most cases much shorter annealing times.  The relationship between plastic deformation, annealing temperature, and the resulting grain size is for specific alloys for practical applications often presented in terms of recrystallization diagrams.  It should be noted though that in such diagrams the influence of chemical alloy variations and specifically also of the annealing time is often not taken into consideration. This means that even for practical purposes such recrystallization diagrams can only serve as a rough first guideline for assessing an appropriate softening heat treatment.

The term dynamic recrystallization refers to all recrystallization phenomena that occur during the plastic deformation.  Such phenomena hence typically occur when hot deforming the material at temperatures greater than about half of the absolute melting point.

The kinetics associated with the softening process during such an annealing treatment can be grouped into three main stages, namely, recovery, recrystallization and competitive grain coarsening.  The latter mechanism is also referred to as grain growth. 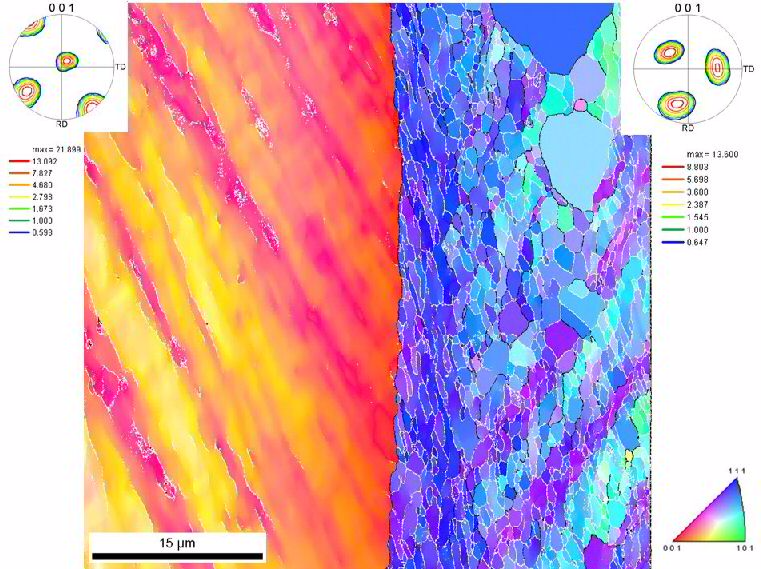 Recrystallization and recovery in ferritic IF steel.

Recovery usually occurs at low temperatures and involves the thermally activated motion, condensation, and annihilation of point defects and specifically the annihilation and rearrangement of dislocations. Owing to the high self-ordering tendency among dislocations recovery hence results in the formation of pronounced subgrain structures consisting of tilt and twist low-angle grain boundaries. With ongoing recovery further dislocation annihilation and particularly competitive subgrain growth takes place. This mechanism overlaps with the onset of recrystallization which is characterized by discontinuous nucleation phenomena. In some materials recrystallization nucleation can result from discontinuous subgrain growth where some of the subgrains accumulate a sufficiently high misorientation relative to the as deformed surrounding microstructure.

Recovery leaves the grain topology of the deformed crystals usually unaffected as it does not involve the motion of high angle grain boundaries.  Instead the dislocation re-arrangements described above occur within the as-deformed grains. Relatively small and continuous changes in hardness occurring during static recovery are essentially due to the gradual decrease in the elastic distortion of the material which is attributed to the reduction in the dislocation density, to the formation of low energy dislocation cell structures, and to the growth of these subgrains.
While static recovery thus describes the thermally activated formation and re-organization of dislocation substructures in a deformed material, recrystallization is concerned with those phenomena where the formation and subsequent motion of new high angle grain boundaries is involved.  The newly formed interfaces discontinuously sweep the inherited deformation substructure and lead to a softened polycrystal microstructure.

Recrystallization starts when sufficient thermal activation is available to lead to nucleation and growth of strain-free new grains in the plastically deformed matrix. Since newly formed grains sweep the deformation microstructure discontinuously, recrystallization nucleation can be described as a process leading to a local strain free zone in the deformation matrix. This newly formed strain free region is mainly surrounded by newly formed or bulged mobile high angle grain boundaries.

During recrystallization the strength and hardness both decrease considerably and often at much higher rates than during recovery.  During the recrystallization process the original ductility that the metal had prior to cold deformation is restored. The lowest temperature at which newly formed stress-free grains appear in the microstructure of a previously plastically deformed metal is termed the recrystallization temperature. This depends upon the grain size, the severity of plastic deformation, the strain path, and the presence of solute atoms or second phase particles. The recrystallization temperature is usually 1/3-1/2 the absolute melting point of the material in Kelvin.
Recrystallization is finished when all originally deformed grains are swept by mobile grain boundaries. After that and locally also during the ongoing recrystallization grain growth, i.e. competitive capillary driven grain coarsening begins. This phenomenon changes the strength of the material further owing to the increase in the average grain size and the associated reduction in Hall-Petch strengthening.  Grain growth is thermodynamically driven by the reduction of the total grain boundary area.  While recovery and grain growth are relatively slow processes, recrystallization follows in most cases sigmoidal-type kinetics, i.e. it can proceed very fast after an initial more sluggish nucleation period.